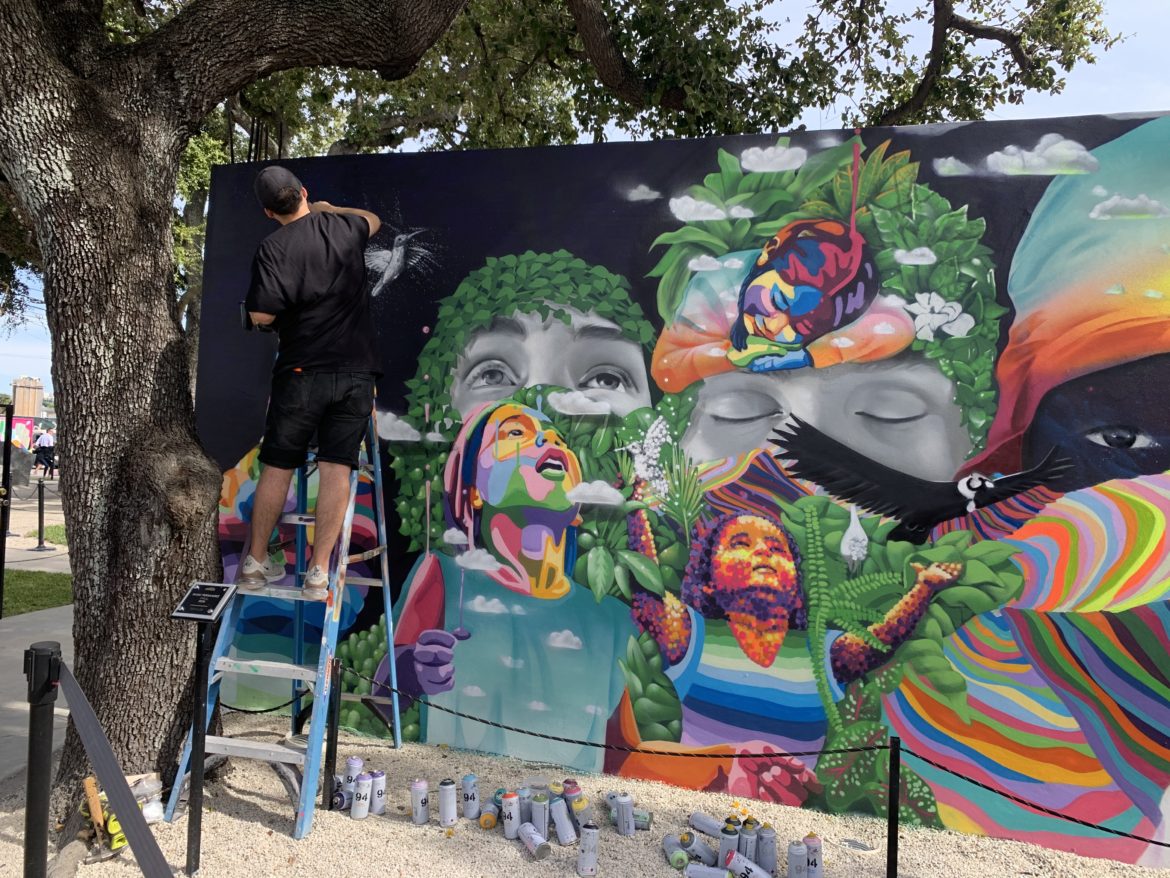 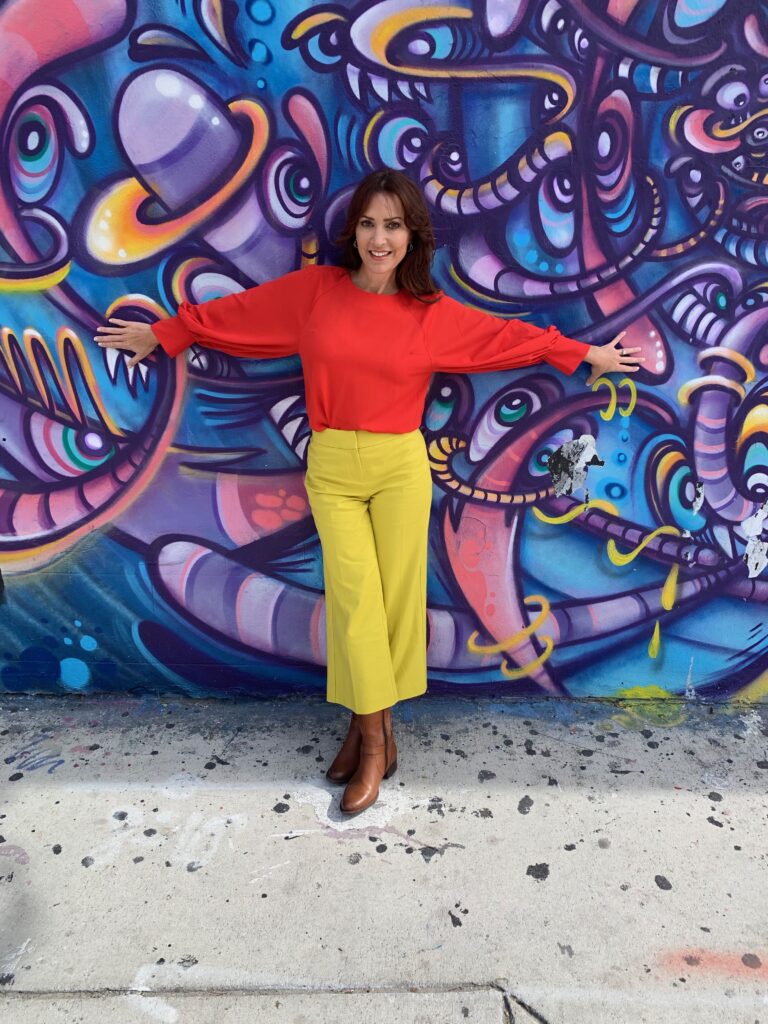 The Design Tourist aka Karen LeBlanc in the Wynwood District, Miami

During the week of Art Basel Miami Beach,  the city is electric with creative energy. All around the Wynwood district, street artists are at work painting buildings with new murals for Wynwood Mural Fest. 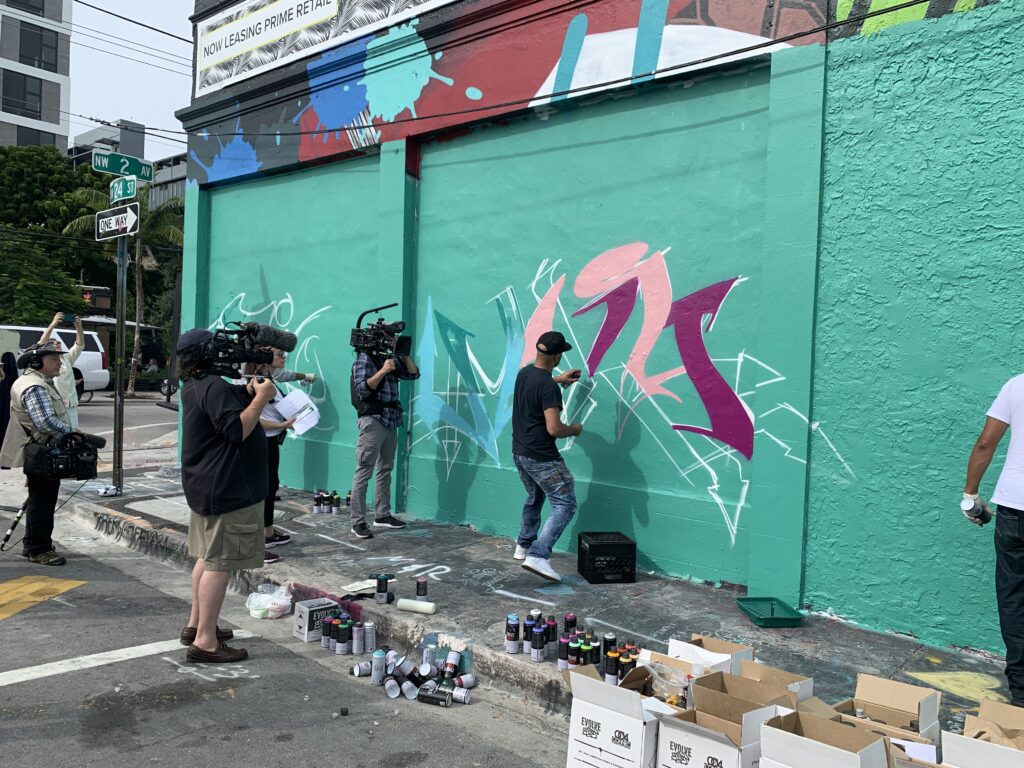 Street artists drawing the attention of TV cameras as they paint fresh murals in the Wynwood District of Miami for Mural Fest.

Wynwood Walls is like a street art museum, free and open to anyone who wants to walk around and admire the murals. The concept began as a vision for outdoor art space by developer Tony Goldman, founder of Goldman Properties. 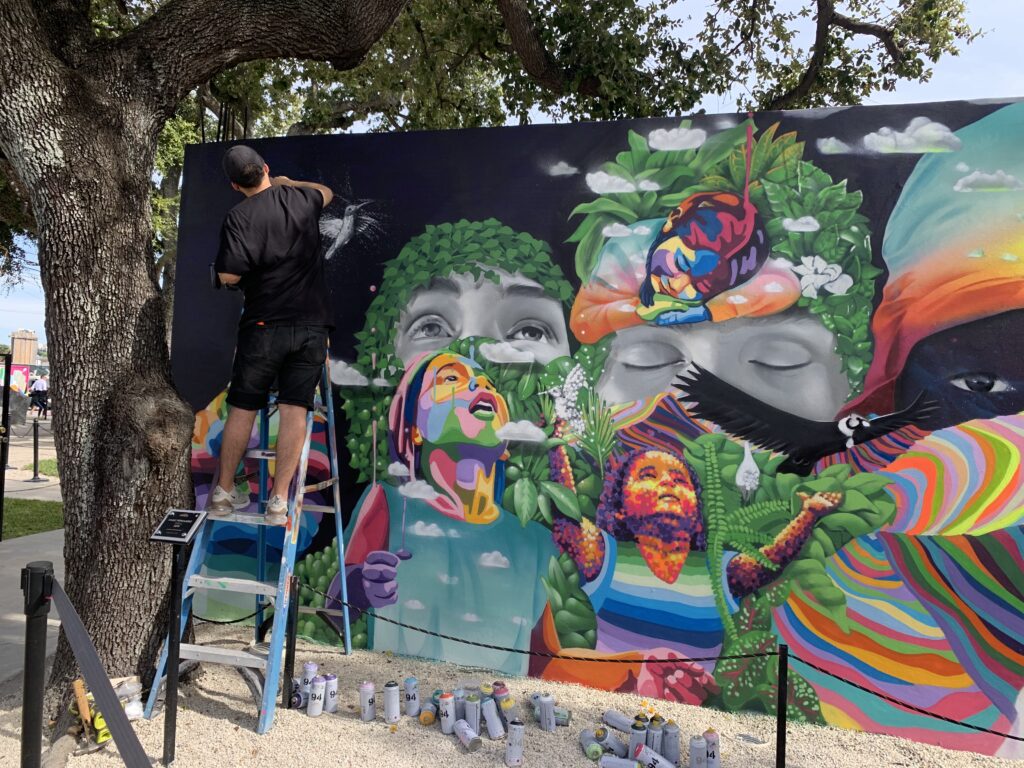 Street artist painting a fresh mural at The Wynwood Walls

His concept started with six painted buildings that he commissioned artists to paint in the area which eventually became the core. 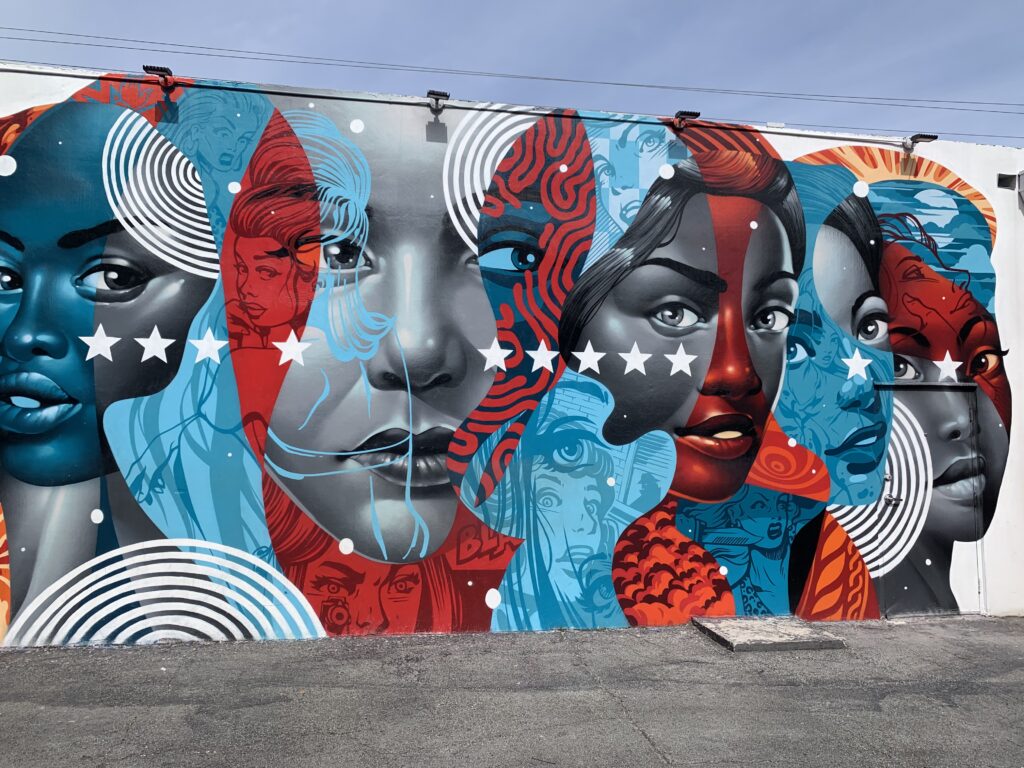 Mural at the Wynwood Walls in Miami

Over the next decade, the painted walls proliferated. Each year during Art Basel Miami Beach, new murals are unveiled creating a destination of urban art. 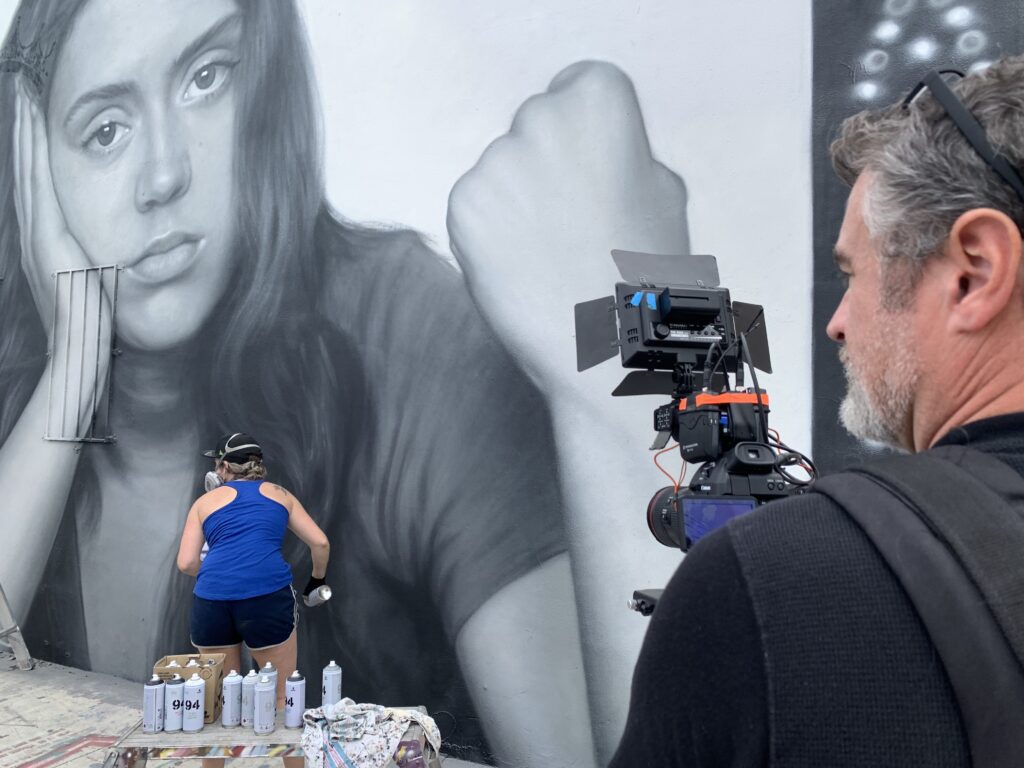 The Design Tourist videographer filming a street artist painting a fresh mural for mural fest in the Wynwood District, Miami

I met up with Zack Lawrence, production manager for Wynwood Mural Festival on opening day as vendors were setting up tents and food trucks in anticipation of huge crowds later that evening. 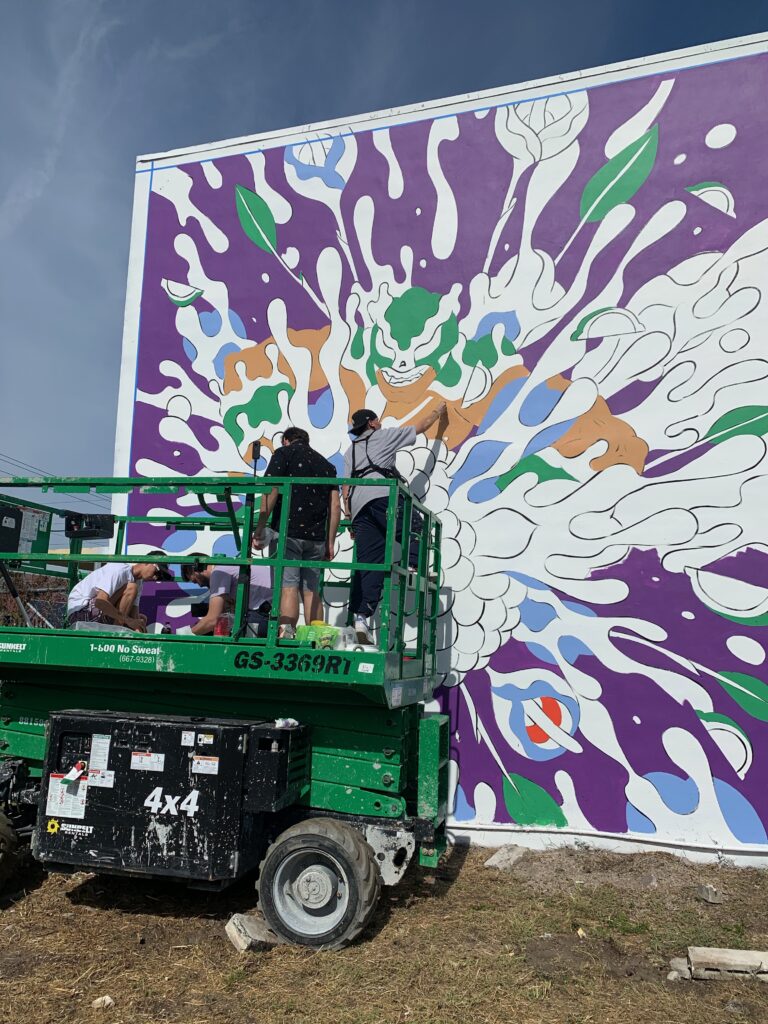 Street artists painting a new mural at the entrance to mural fest in the Wynwood District, Miami

A team of street artists were at work painting a mural at the entrance to the festival grounds, one of many fresh murals coloring the buildings of the Wynwood District. 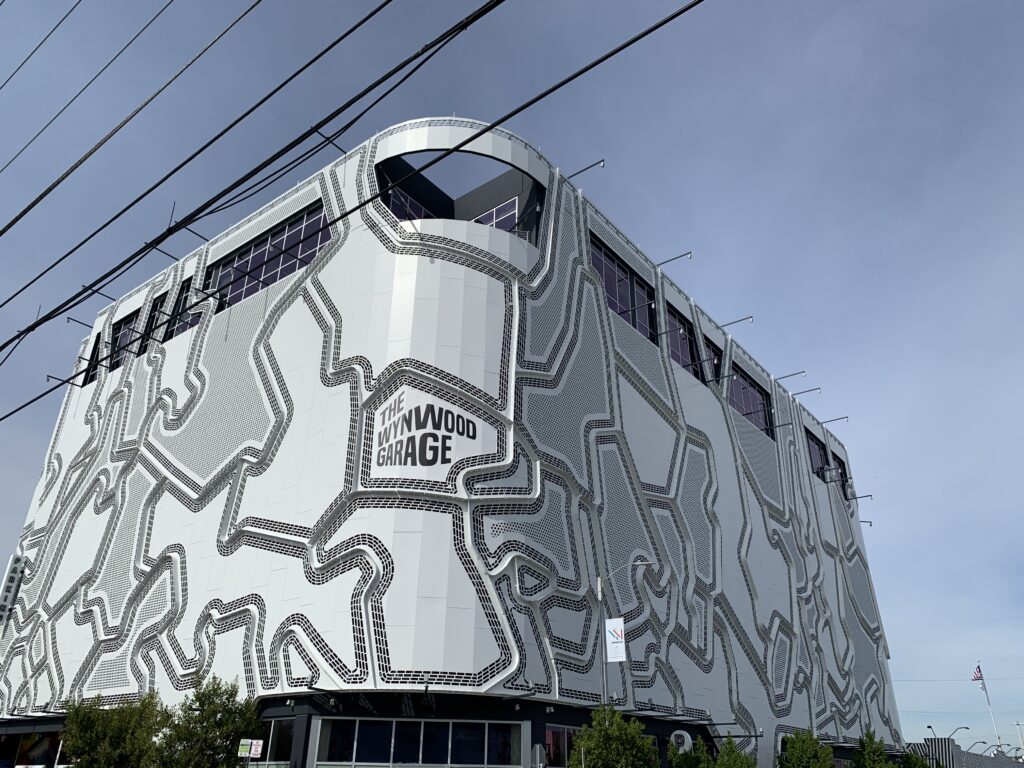 The Wynwood District in Miami

“The Wynwood arts district is an area of Miami that was founded originally by artists. They are bringing this graffiti and mirrorless culture into the city in a major way. They’ve purchased a lot of the properties in the area. They own a lot of the warehouses and they collaborate with a lot of the businesses around this area to create this ethos that exists in this neighborhood. It attracts people from all around the world every single year to paint large murals. A lot of these people are world-famous painters and muralists,” Lawerence says. 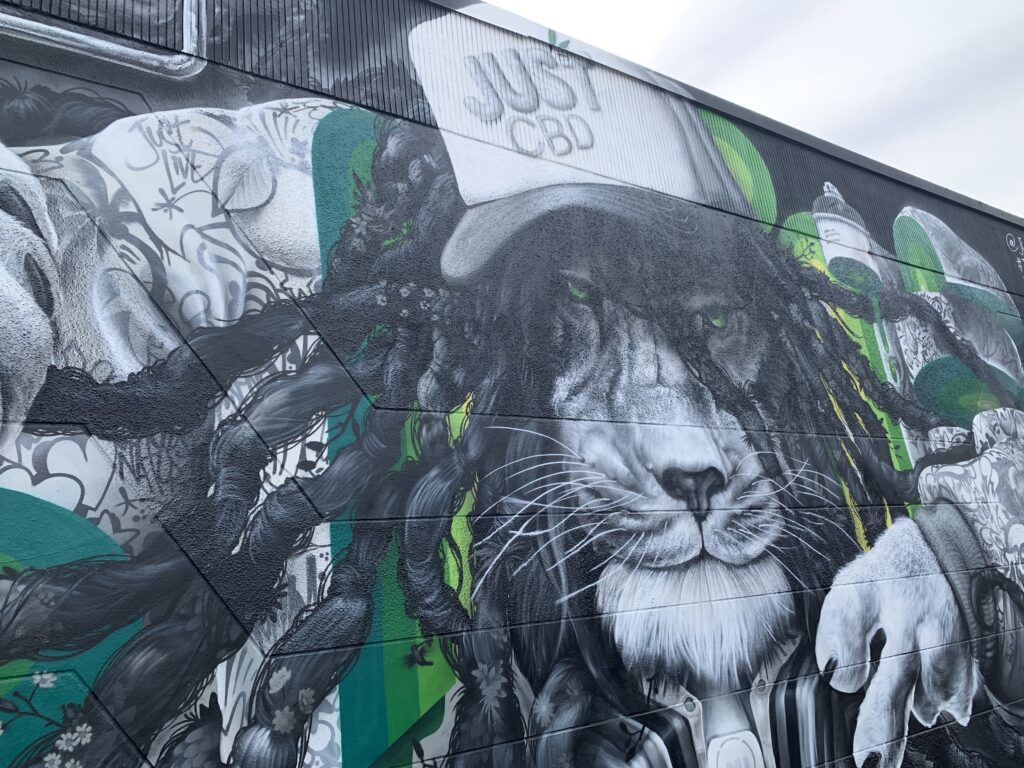 “We’re here for the art and we’re trying to plant a flag in the neighborhood that really makes us a mainstay. We want to continue to put this event on, as well as other events to represent the entire collective of artists and businesses in the neighborhood,” Lawerence says. 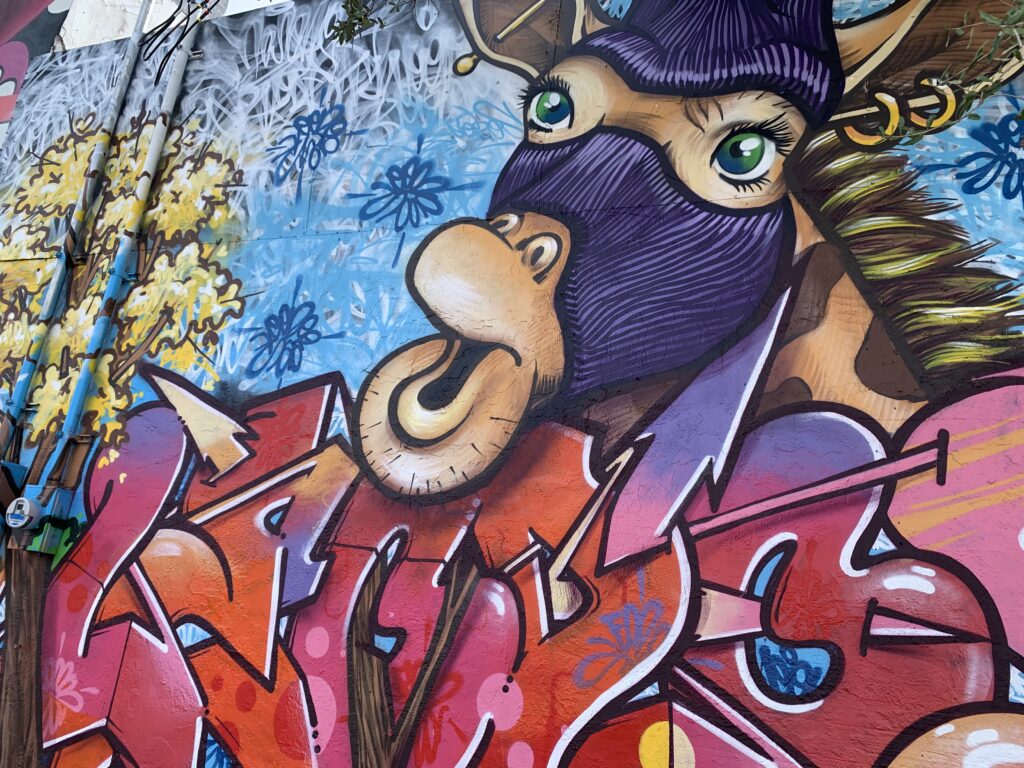 During Art Basel Miami, some of the biggest names in graffiti and street art come to the Wynwood District to paint walls that are divided into zones curated by art experts. I met up with one of the curators, Gleason LeRoy, who selected street artists to paint walls in his zones. “So, the zones are actually different collectives that actually have been painting their own zones every year. We came together as one for the Mural Fest to kind of take back the neighborhood from everybody else. It’s not about competing with each other, but to unify and really give it that artists feel,” LeRoy says. 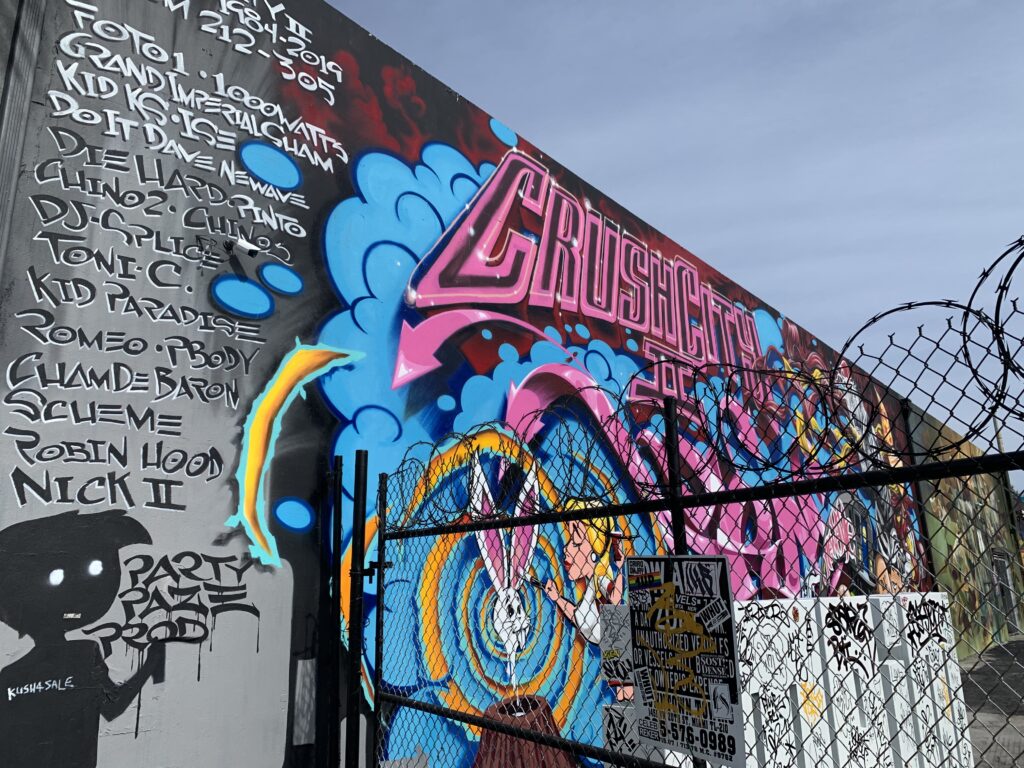 Art Basel Miami, as the anchor of Miami Art Week, serves as the marketing season for street artists who travel from around the world to paint murals for Mural Fest and capture the attention of more than 200,000 visitors filling the streets. 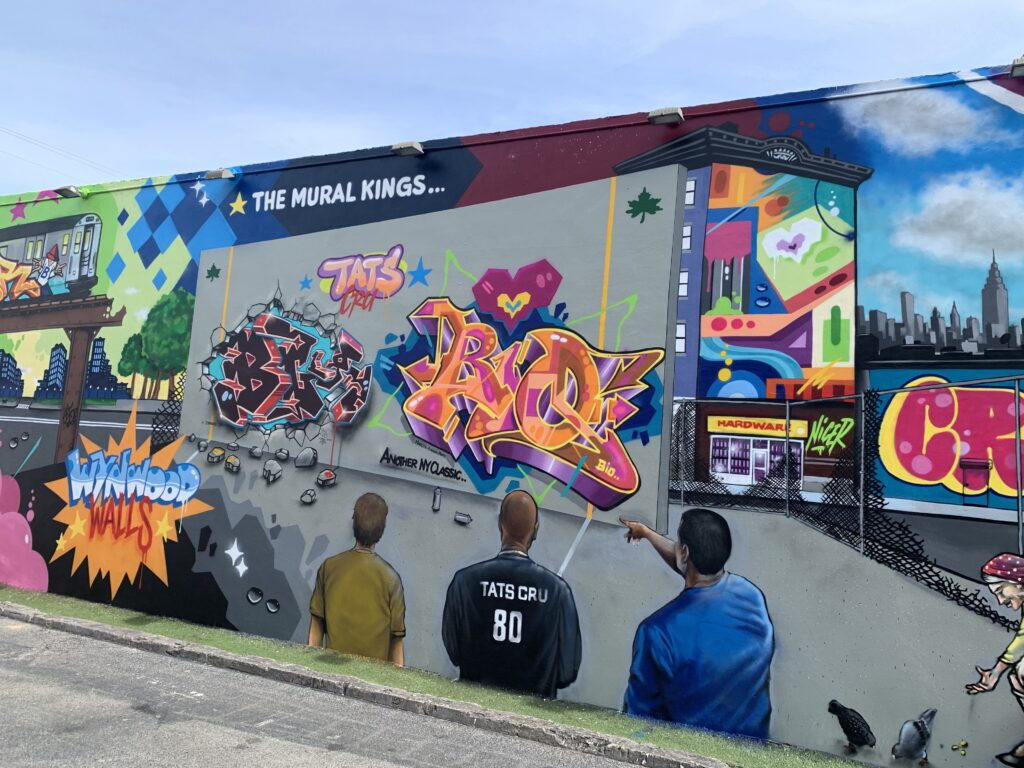 The Wynwood Walls in Miami

“A lot of these people come with different stylistic choices in different ways that they communicate their message of art,” Lawerence adds. 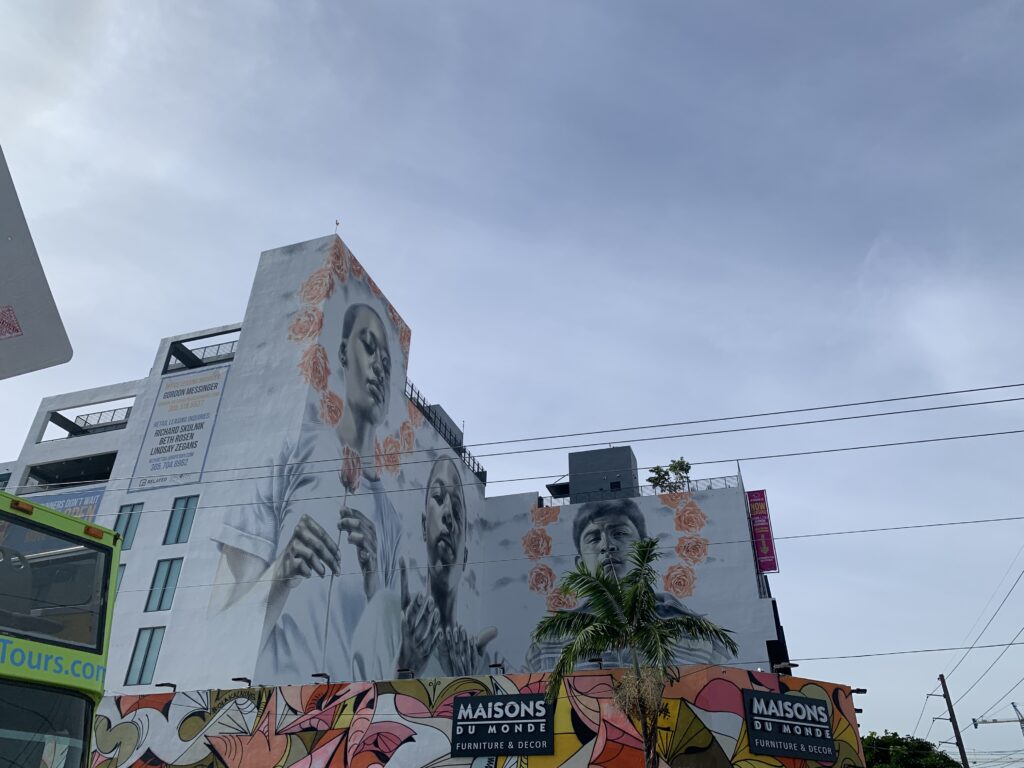 The Wynwood District in Miami

Art Basel Miami brings together art in all its iterations and the Wynwood District offers that unique opportunity to experience creativity outside the bounds of traditional art fairs and galleries. It’s an outdoor art museum that is free and always open to the public.