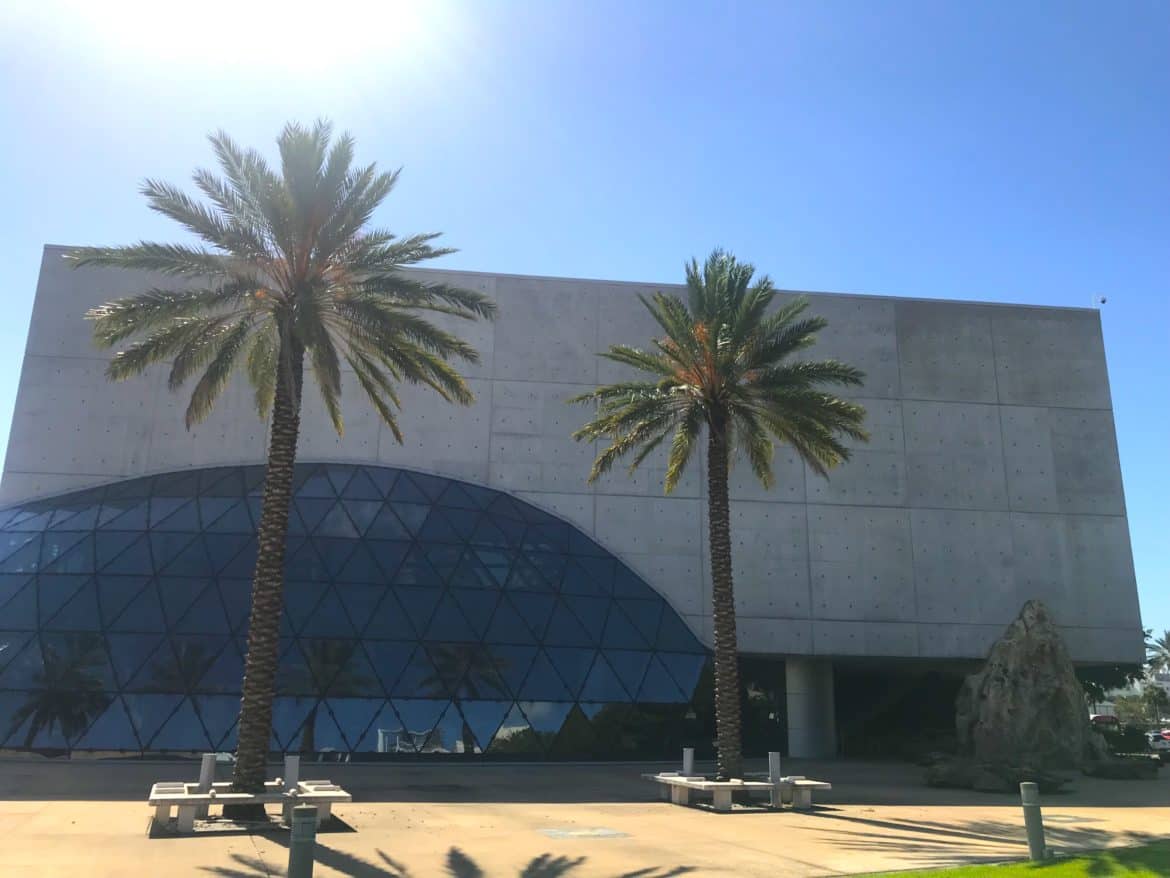 In downtown St. Petersburg, Florida, lies a futuristic glass and concrete structure that looms large over the waterfront dotted with docked sailboats. This architectural oddity is an attraction inspired by its the contents, the surrealist works of Salvador Dali. 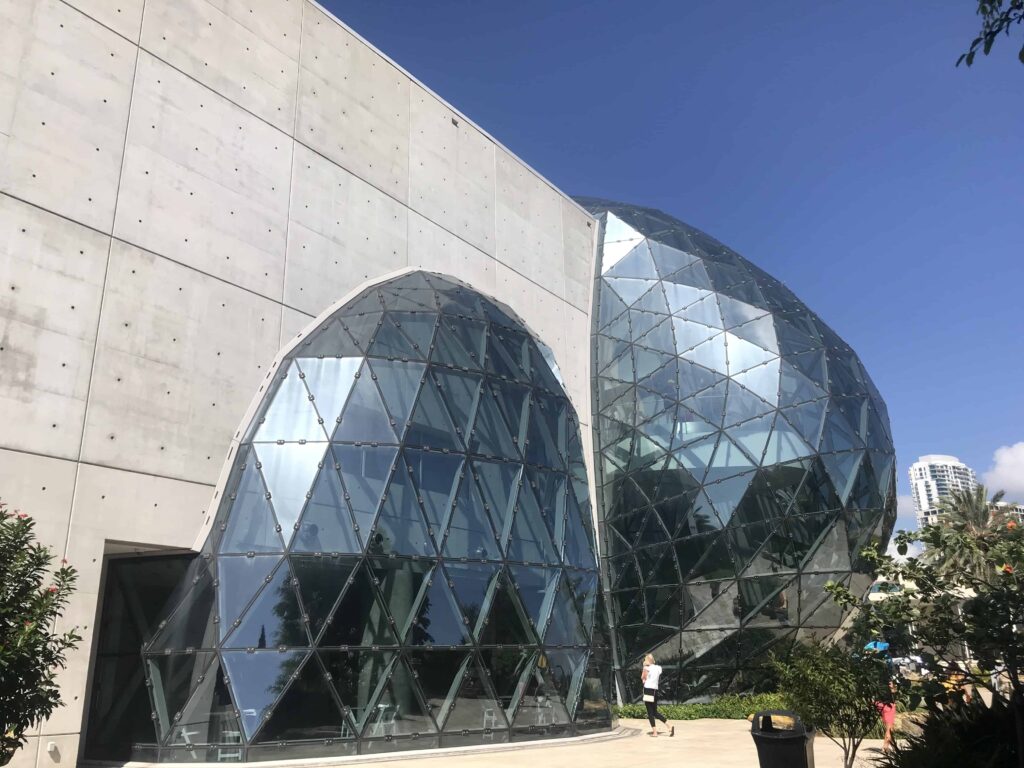 The Dali museum is designed by architect Yann Weymouth of HOK, combining “the rational with the fantastical.” Oozing out of a hulking concrete box with 18-inch thick hurricane-proof walls is a large free-form geodesic glass bubble known as the “enigma”. 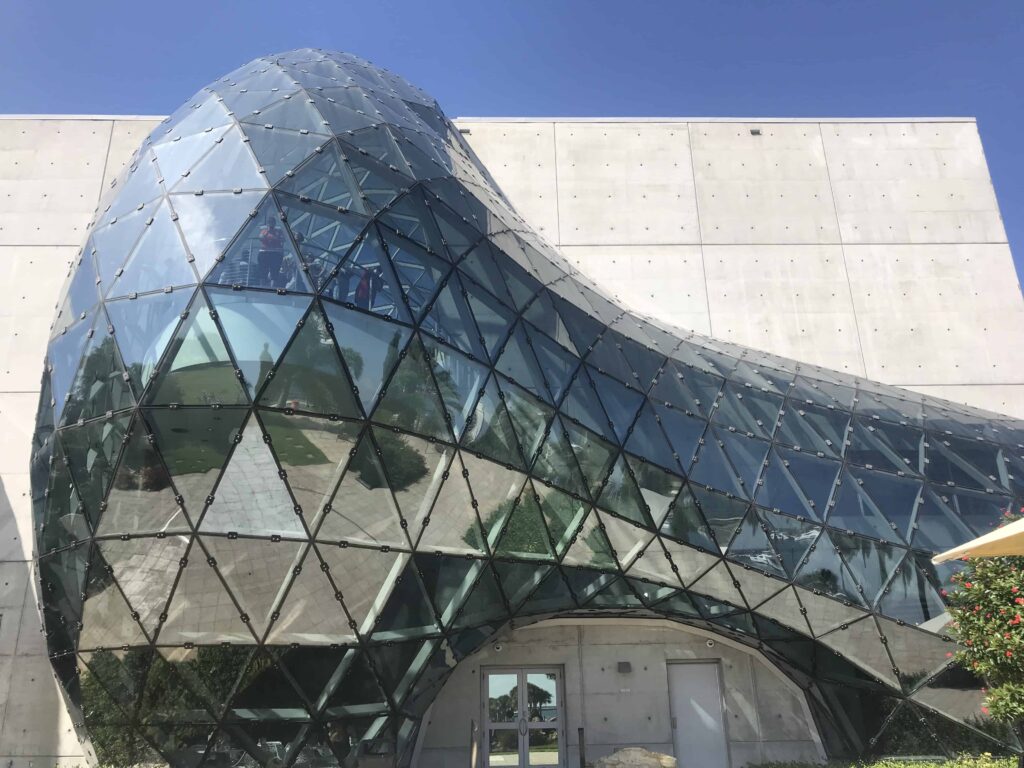 The Enigma is made up of 1,062 triangular pieces of glass, stands 75 feet at its tallest point, a twenty-first-century homage to the dome that adorns Dali’s museum in Spain. 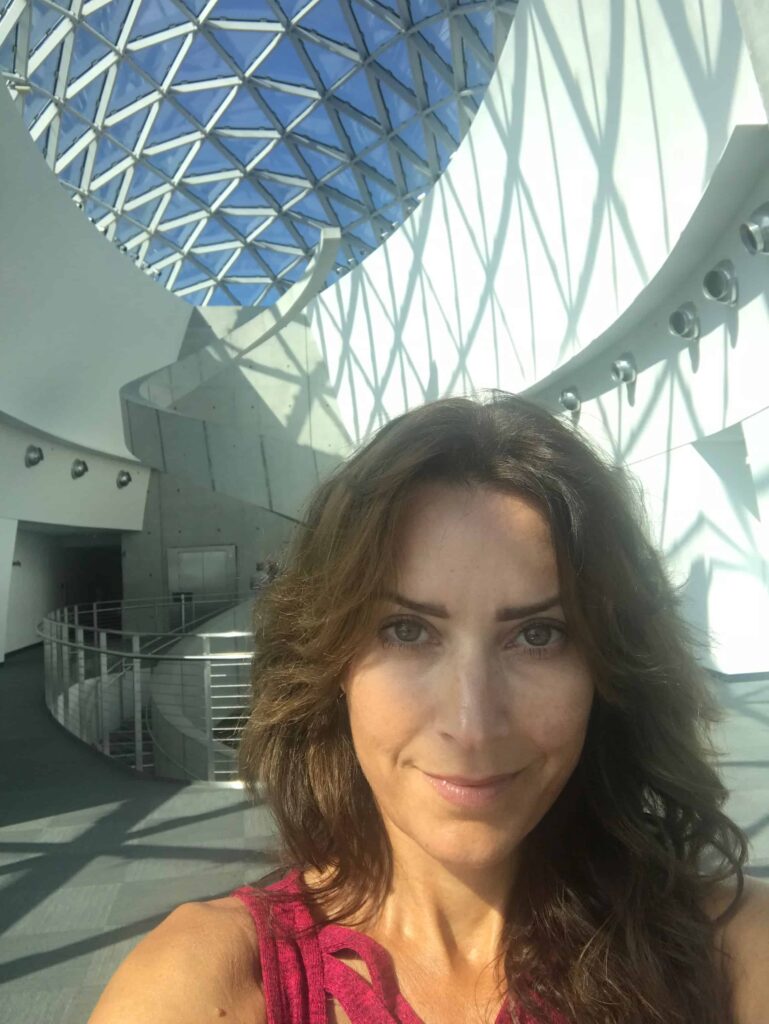 Design Blogger Karen LeBlanc aka The Design Tourist visiting The Dali Museum in St. Petersburg Florida. A selfie at the spiral staircase.

I recently visited The Dali Museum and my advice to anyone wanting to enter Dali’s headspace is to begin at the winding helical staircase,  a nod to Dali’s obsession with spirals and the double helical shape of the DNA molecule during his Nuclear Mysticism period of art, and gaze through the geodesic skylight. 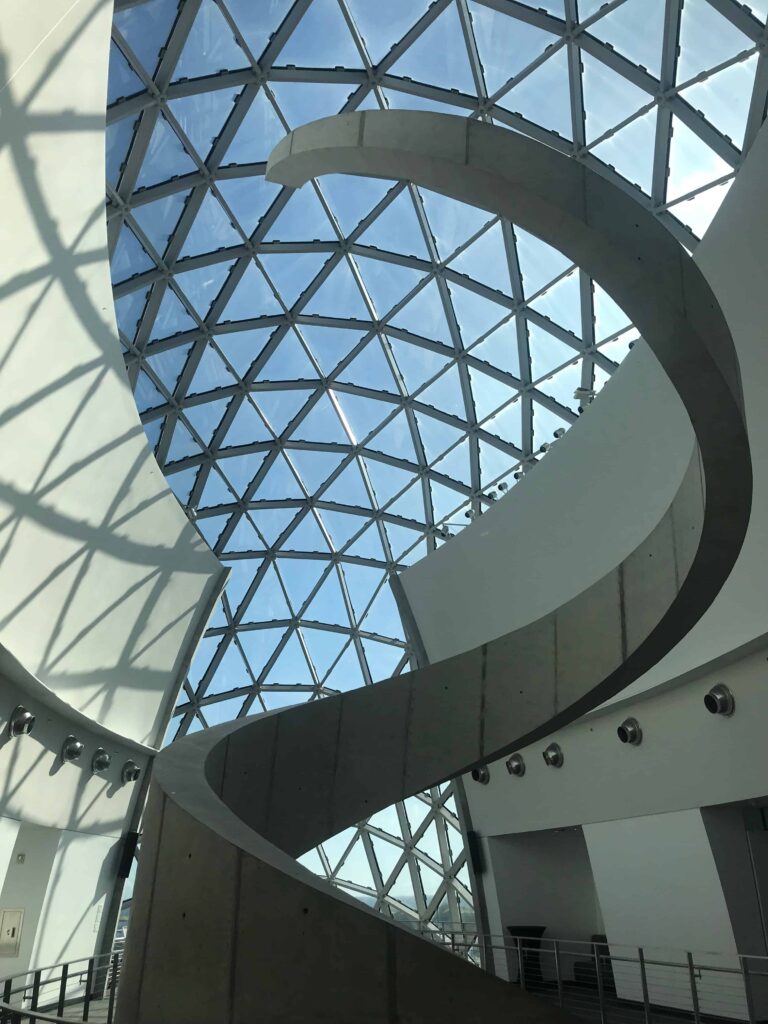 The winding helical staircase inside The Dali Museum

It’s how I found myself teleported into the magical mind of Dali before I began to peruse the largest collection of his works outside of Dali’s native Spain. 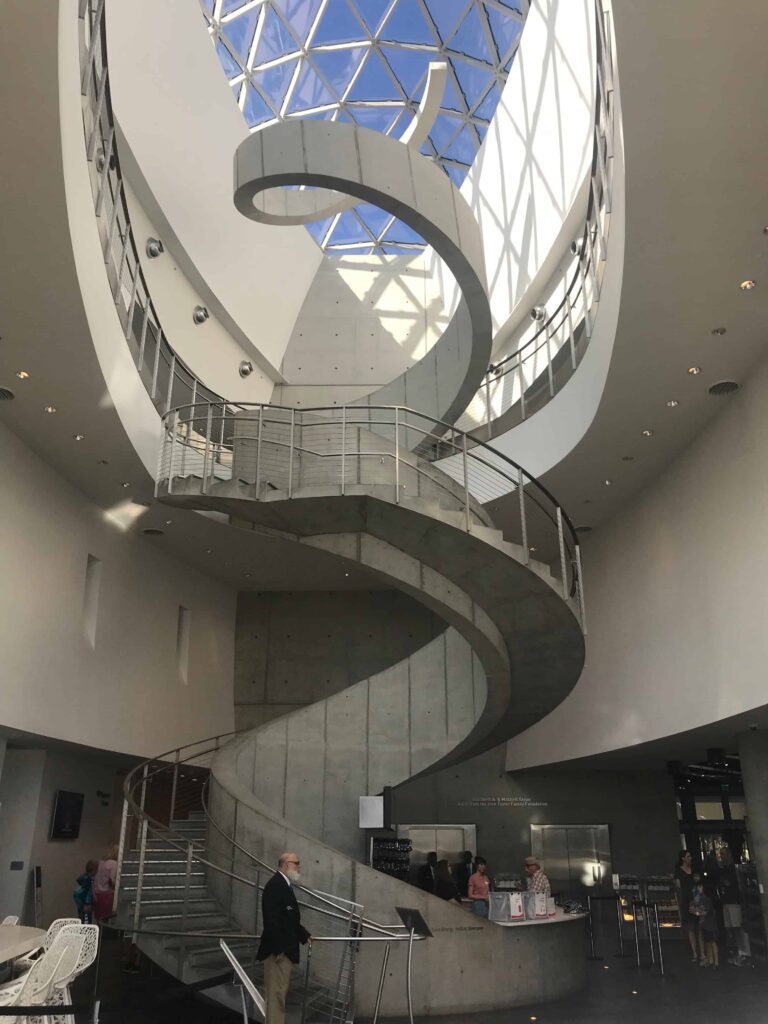 The Dali Museum permanent collection is home to art spanning Dali’s career from his student pieces through works of Anti-Art, Surrealism, Nuclear Mysticism. I came to see how his native landscapes inspired his most memorable works in a special exhibit, Clyde Butcher: Visions of Dali’s Spain on view through November 25, 2018. 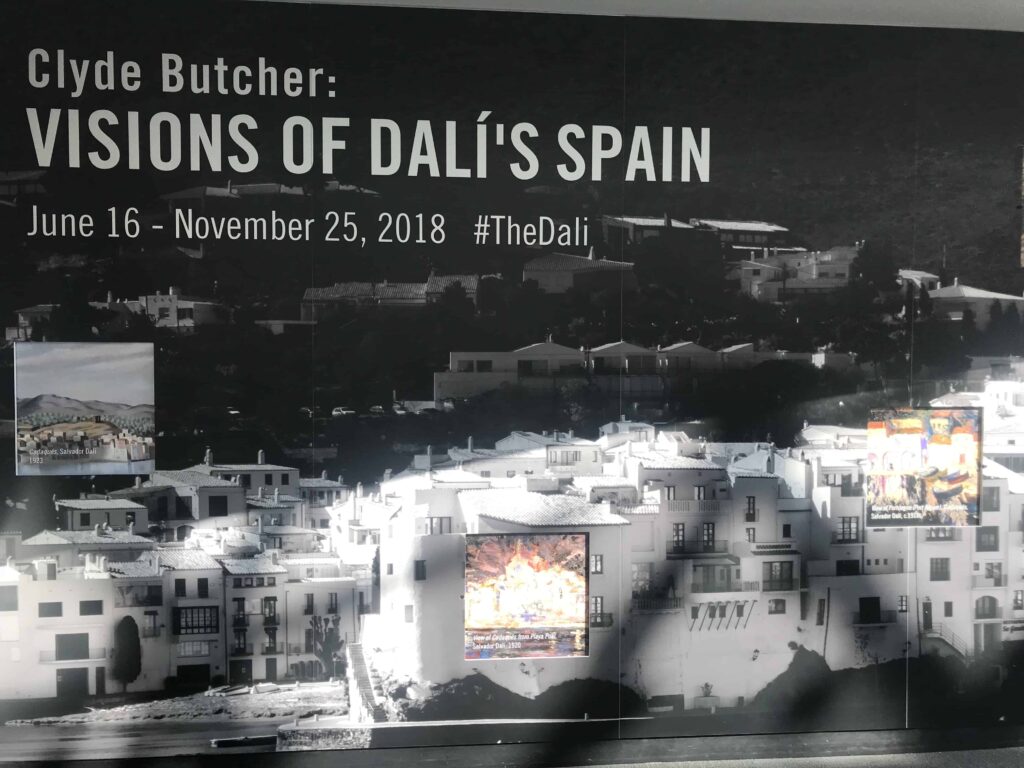 Clyde Butcher is known as “the Ansel Adams of Florida” for his large format black and white photos capturing the beauty of the Everglades. The Dali museum commissioned Butcher to photograph Dali’s dreamlike world, “to bring to light the geological delirium that Dali embraces in his work.” 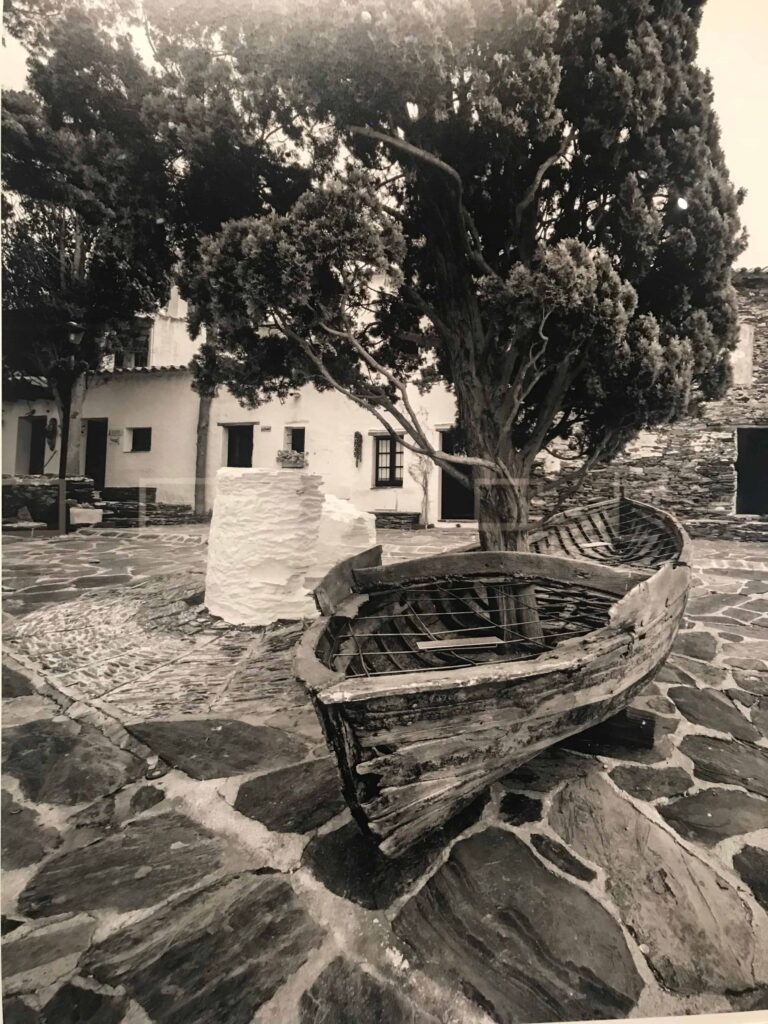 Photographer Clyde Butcher’s image of Dali’s home in Port Lligat, where visitors are greeted by a surreal icon of a cypress tree growing out of a fishing boat.

In 2016, Butcher traveled to Dali’s homeland, Catalonia’s Mediterranean region, in Spain to photograph the landscape including Cadaques where  Dali spent summers growing up and Port Lligat and the region of Cap De Creus, all area featured in Dali’s work. 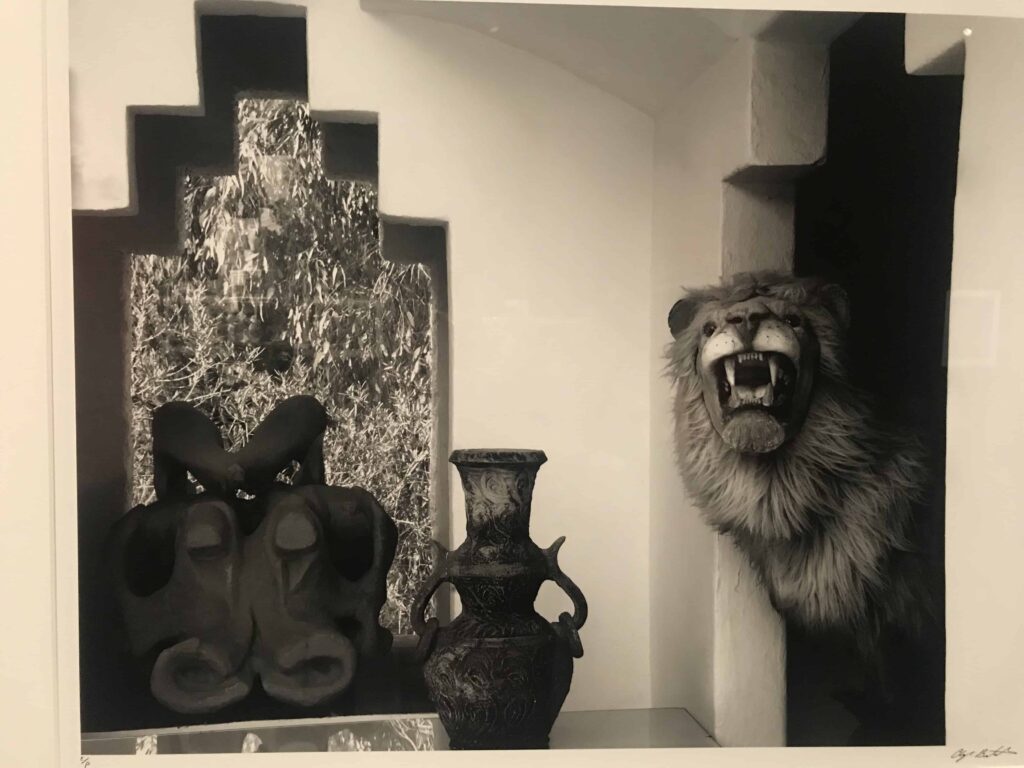 In Port Lligat, where Dali and his wife Gala lived in a grand surreal home that began as a simple fishing shack, Butcher captures the curiosities the filled the living spaces. Dali and Gala eventually purchased adjacent shacks to create a meandering structure of rooms that has now become a museum. 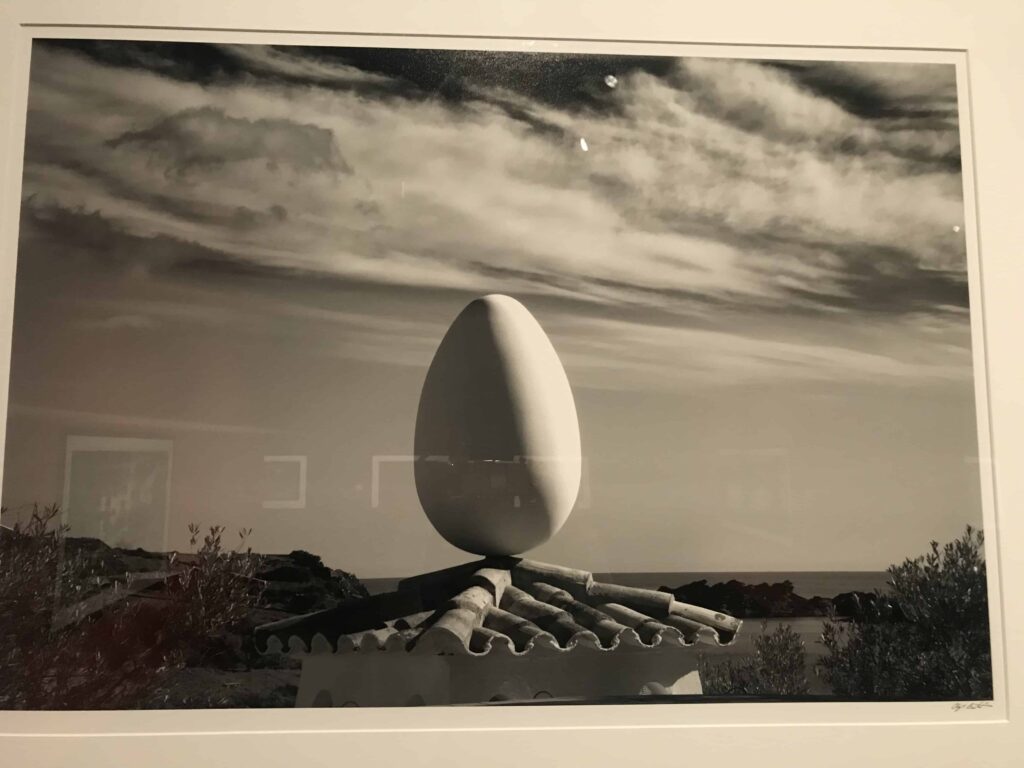 One of several egg motifs, a Dali favorite, on view at his home in Port Lligat. Clyde Butcher took the photograph as part of the exhibit Visions of Dali’s Spain on view at The Dali Museum in St. Petersburg.

Butcher typically photographs with a large format camera but for The Dali Museum commission, he used a smaller format digital camera. “I shoot digital like I shoot film. I wait for the composition and light. Some days I only took two pictures. I don’t shotgun shoot,” Butcher says of his process. 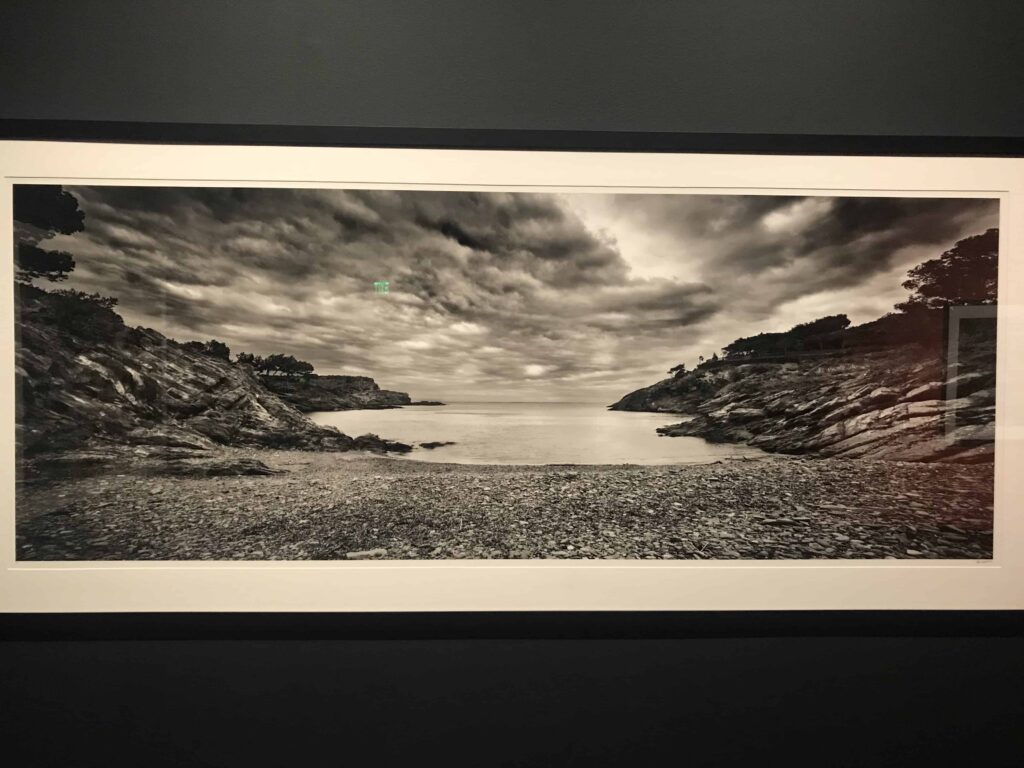 Landscape photo taken by Clyde Butcher of Port Lligat, where Dali lived and worked. Dali drew inspiration for his art from the natural vistas that surrounded his home.

The Clyde Butcher exhibit pairs the photographer’s photos of Dali’s native landscapes with Dali paintings that drew inspiration from them. It’s a unique window into Dali’s mind and soul where the physical landscapes in his life are reimagined in dreamlike renderings. 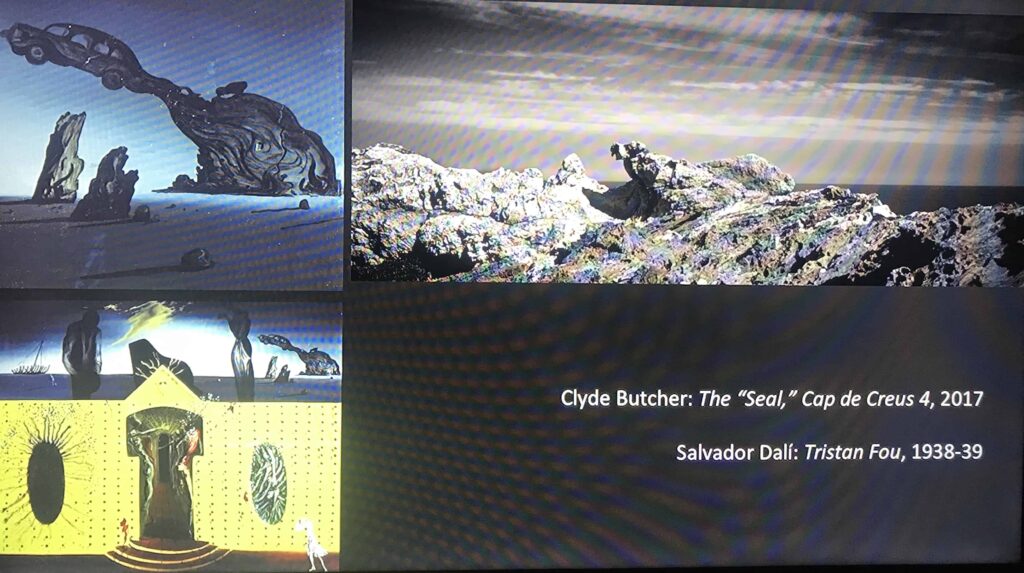 “When people see the exhibit I would like them to see what inspired his paintings,” Butcher says. In the exhibit, Dali’s paintings are paired with Butcher’s landscape photography to reveal the inspiration behind many of Dali’s surrealist paintings. 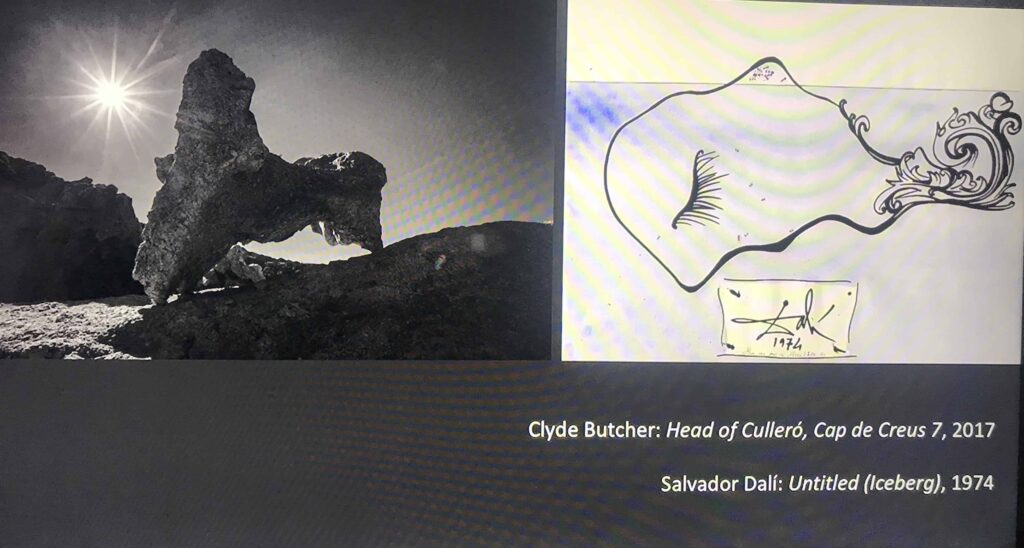 Dali said of his work that people discern only a tenth of what’s visible in his paintings and that the meanings and themes run much deeper. 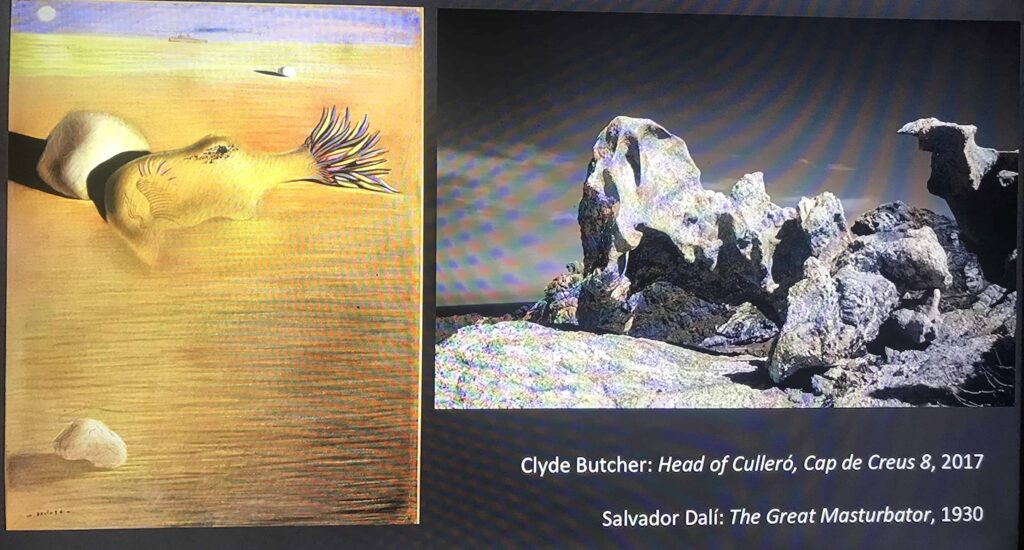 Clyde Butcher’s photography gives us a new lens to interpret Dali’s work providing a context to many of his paintings. 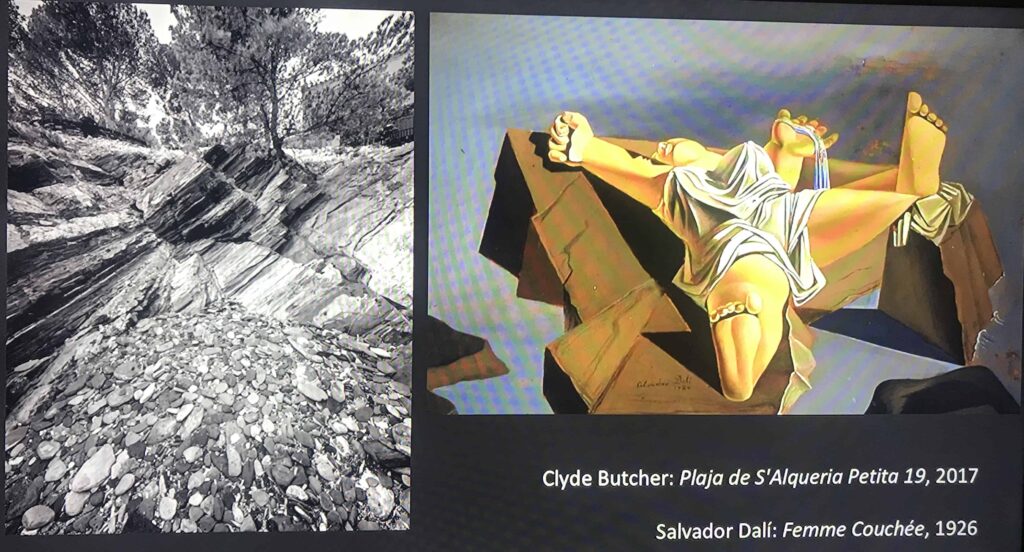 The Dali Museum holds the finest collection of his work outside of Spain chronicling Dali’s artistic evolution starting in the 1920s when Dali discovered surrealism after reading Sigmund Freud’s The Interpretation of Dreams while attending art school. 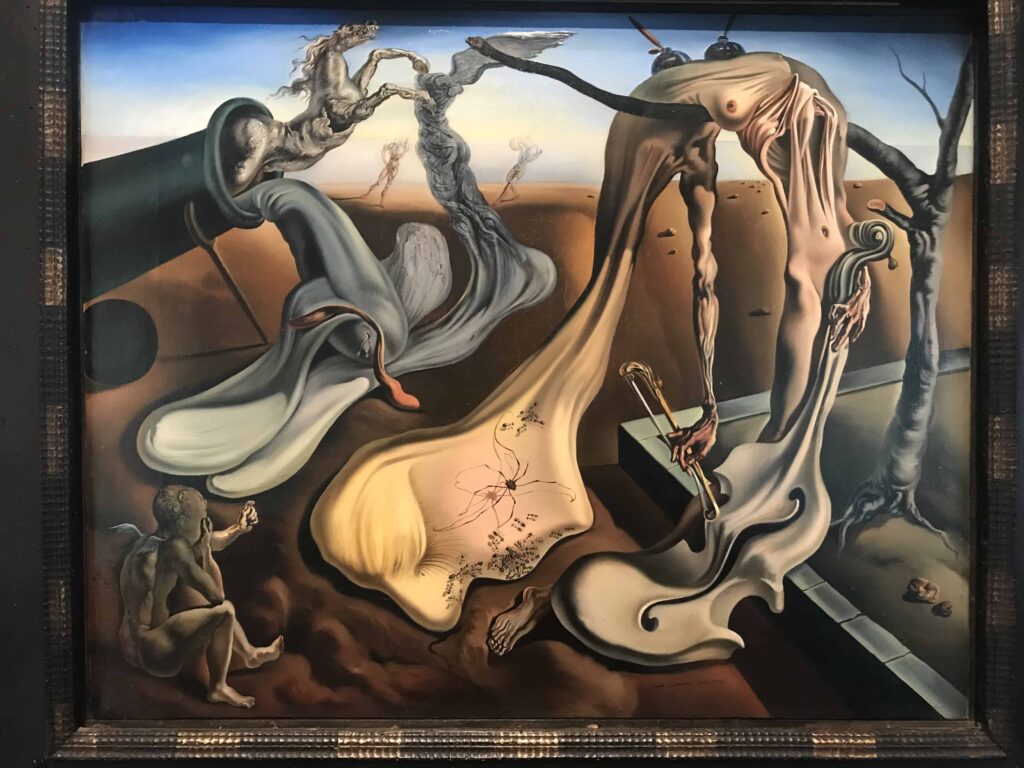 For the next 10 years, Dali’s work was the irrational subject matter with symbolic imagery and complex dreamlike stories. By the 1930s Surrealism grew from its literary origins to become a broad cultural movement encompassing art, design, film, animation and fashion. Dali became a central figure. The defining icon of the movement became Dali’s melting clock. 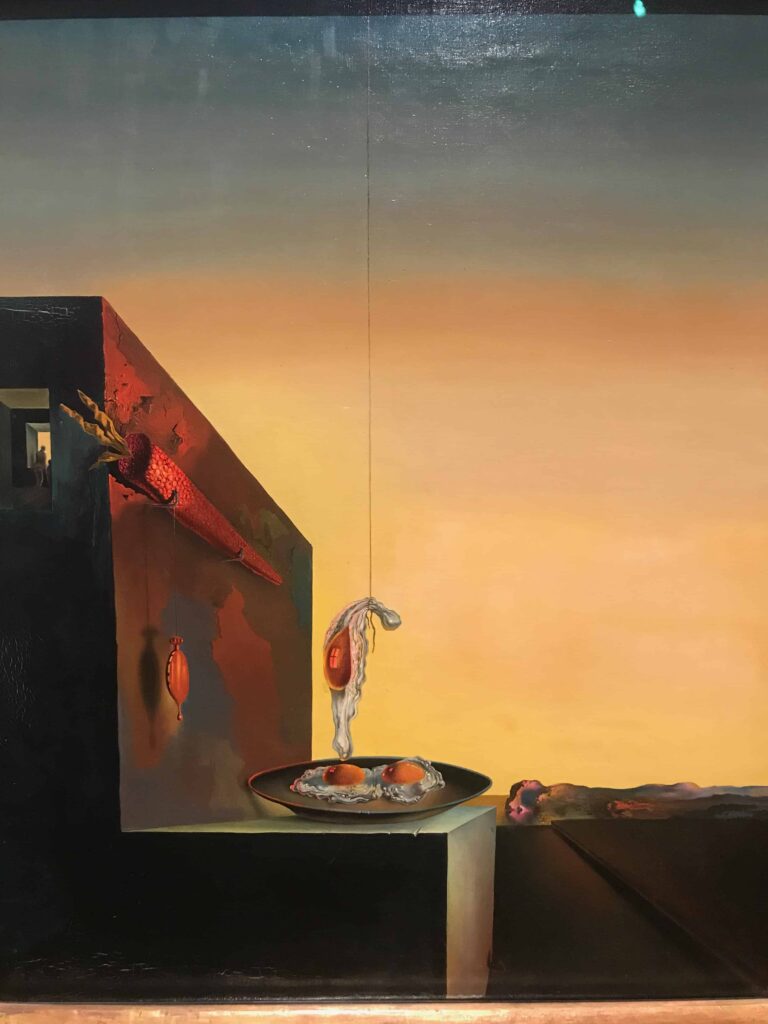 The painting: “Oeufs sur le Plat sans le Plat. In this painting, Dali said he had this vision of fried eggs in his mother’s womb so he painted the hanging egg to represent an embryo.

By 1940 Dali was no longer a surrealist. After he and Gala escaped from war-torn Europe living as refugees in America from 1940 to 1948. He branded himself as a classical artist reacting against modern art’s emphasis on abstraction. 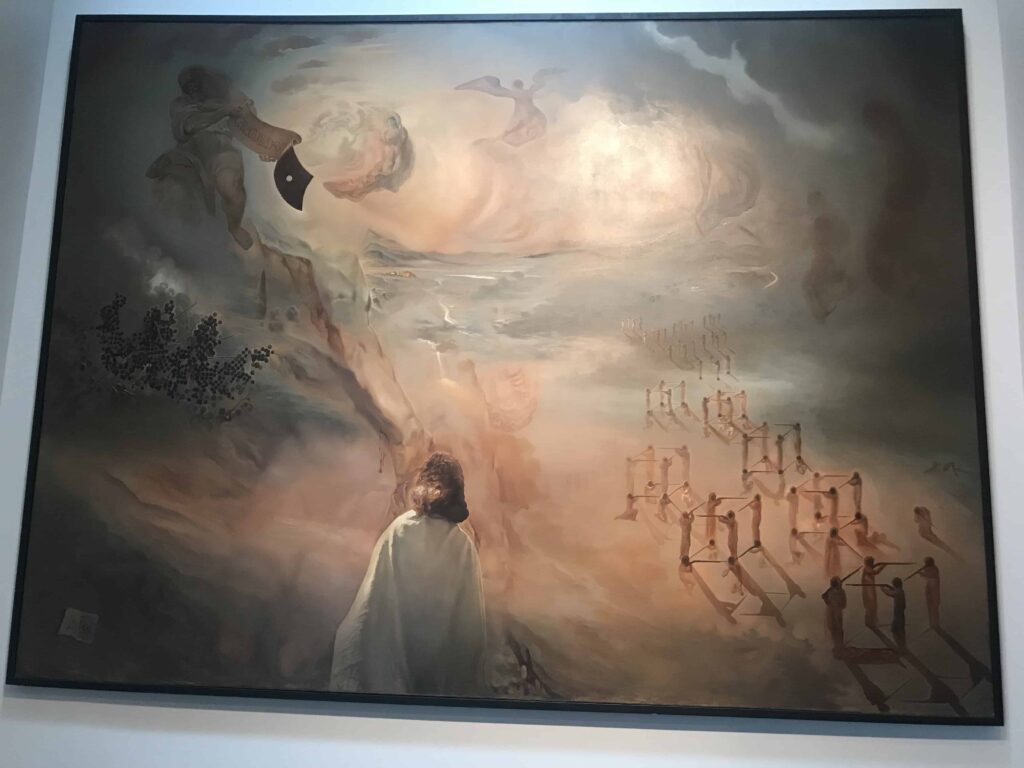 Dali’s Nuclear Mysticism works include the painting, Galacidalacidesoxiribunucleicacid on view at The Dali Museum

In 1950 he created the term Nuclear Mysticism to describe this new phase of work. imaging moved from surrealism’s personal imaginings to the shared worlds of science and religion. 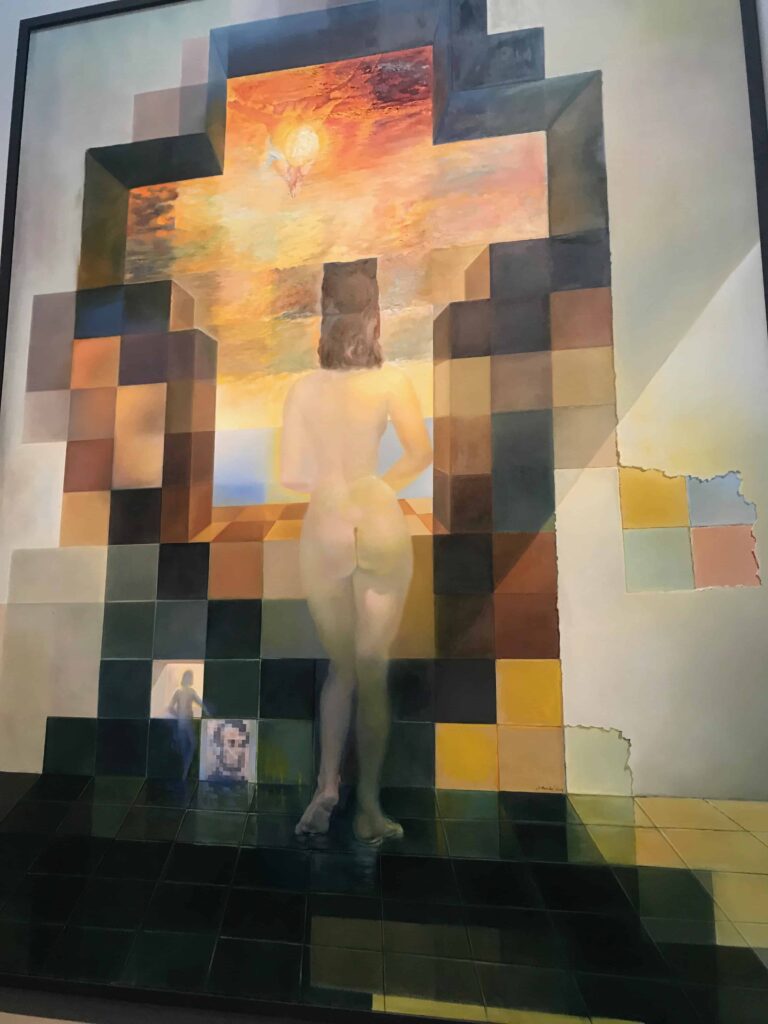 One of Dali’s optical illusion paintings on view at The Dali Museum. This one is called “Gala Contemplating the Mediterranean Sea Which at Twenty Meters Becomes the Portrait of Abraham Lincoln-Homage to Rothko 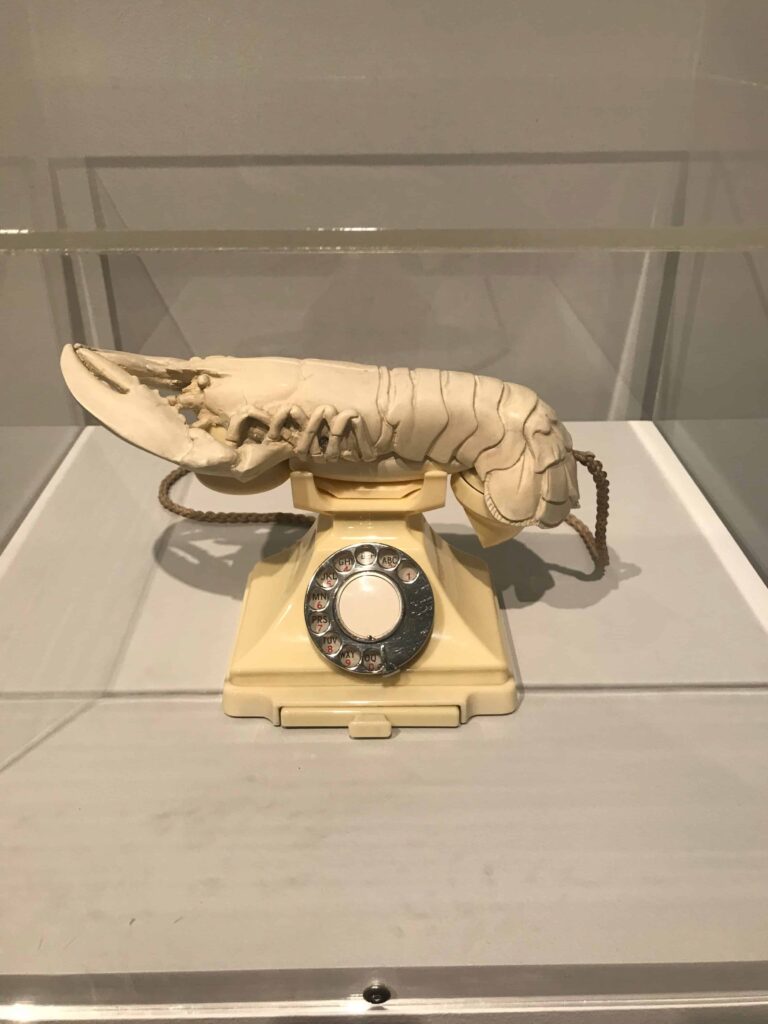 The Lobster Telephone by Salvador Dali, 1938 made of plastic and painted plaster.

The museum features several of Dali’s quirkier works including this lobster phone. Dali says the idea came to him while dining on lobster as he saw someone toss a lobster shell landing on a telephone. 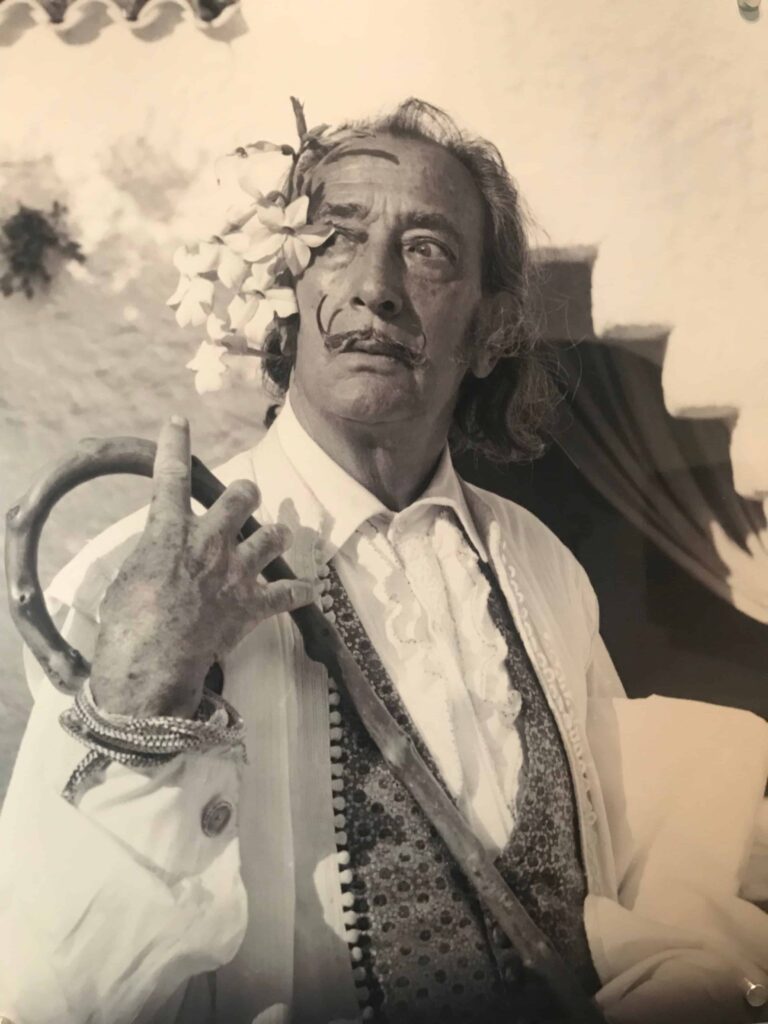 Visions of Dali’s Spain, a photography exhibit by Clyde Butcher at The Dail Museum runs through November 25, 2018. I highly recommend a visit to admire and experience sublime art, photography and architecture.

The Process and Benefits of Installing Double Glazed...

Beating The Heat This Summer

Your Design Skills Could Be Twice As Good...

The Combination of Colors in the Design Process

Kit Your Home Out With Summer Essentials