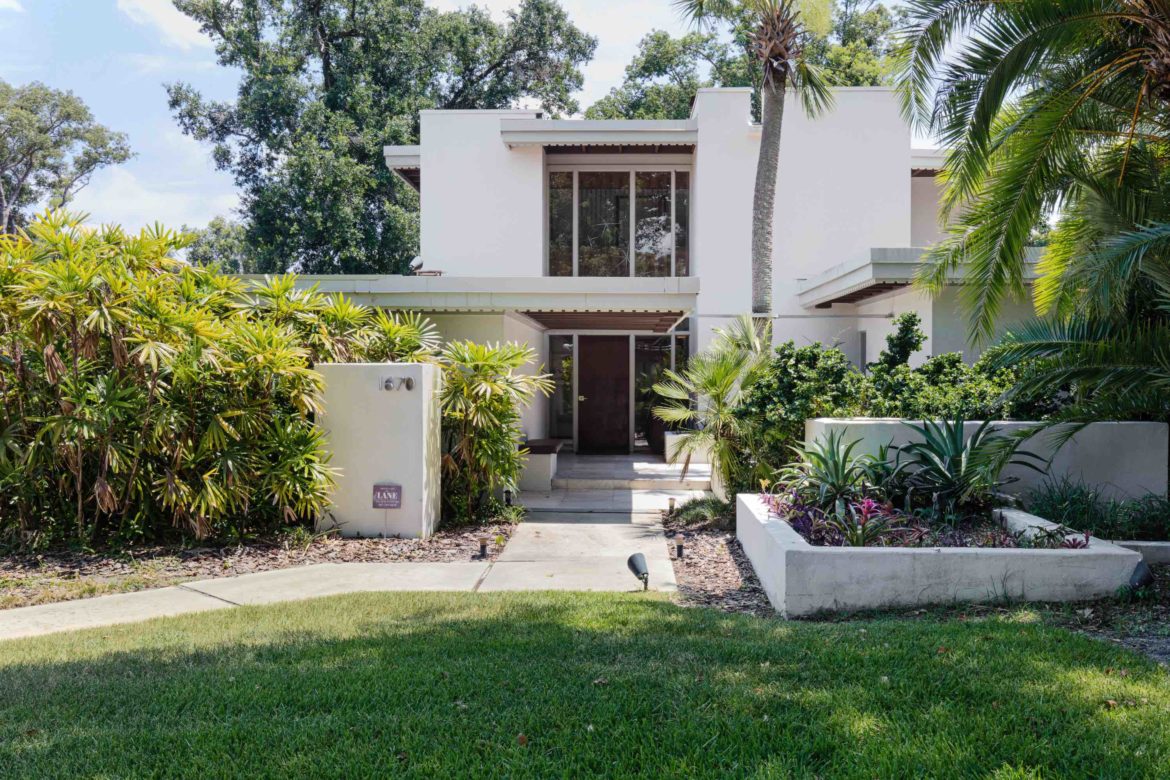 2019 marks the 100th anniversary of the Bauhaus movement that became a way of life and thinking still resonating today.  Walter Gropius founded the Bauhaus school in Germany in 1919 with interdisciplinary ideals merging art and technology, collectively called modernism.  Bauhaus means “School of Building,” in German and it attracted students who wanted to build “cathedrals to the future” using new materials and technologies born of a new era of mass production. 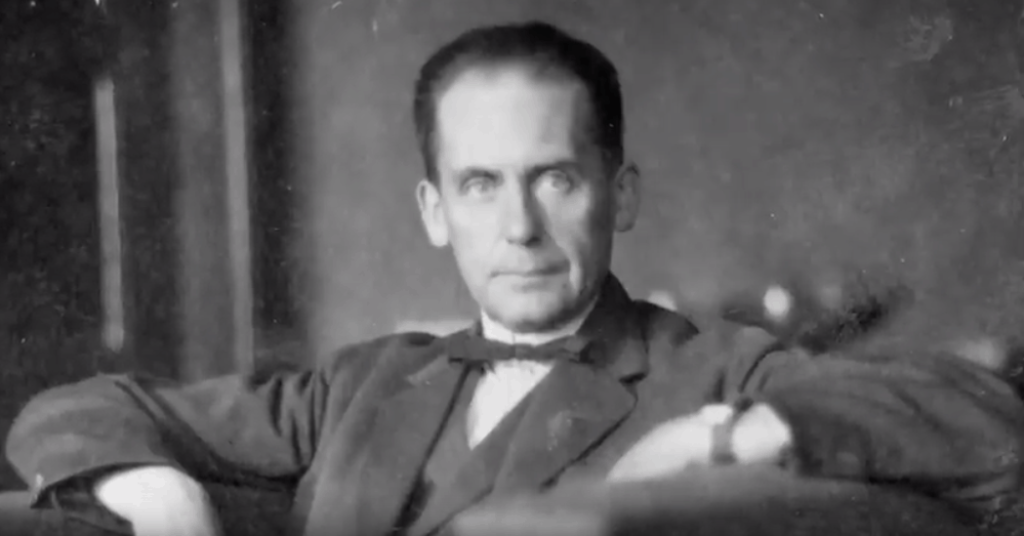 Walter Gropius founded the Bauhaus school in Germany in 1919

The Bauhaus school thrived as an incubator for ideas based on the ethos “form follows function,” until 1933 when the Fascist regime forced it to close. Many Bauhaus teachers and students dispersed to the United States, during World War II and took positions at architecture and design schools including founder Walter Gropius, who joined the faculty of Harvard University’s Graduate School of Design in 1938. Gropius replaced the Bauhaus’s first Director of Architecture, Ludwig Mies van der Rohe, who left to become head of the Illinois Institute of Technology. 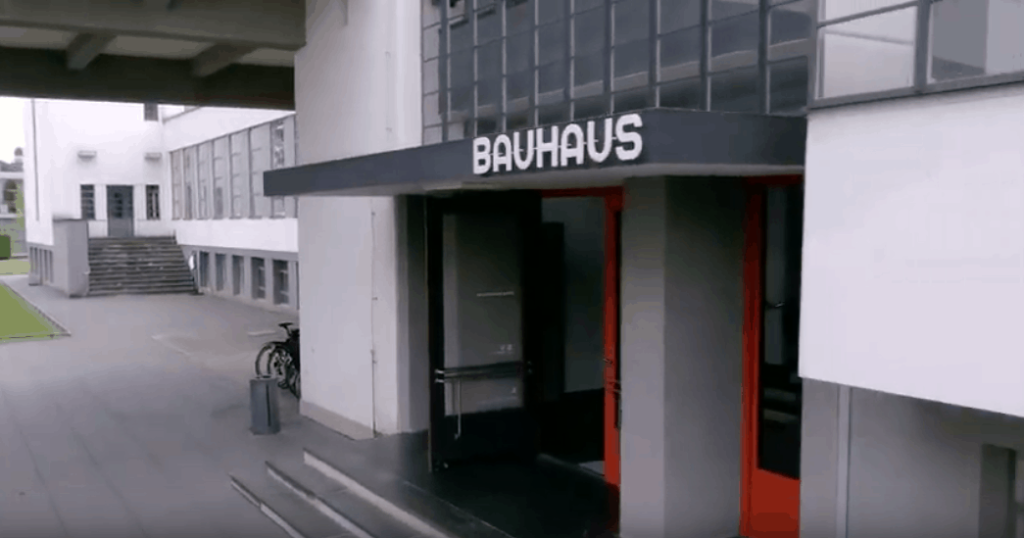 The Bauhaus School in Weimar, Germany

This influx of Bauhaus-trained creatives fostered a new modernist approach over traditional methods taught in architecture and design schools. By the late 1940s and early 1950s, the first generation of American-trained modernists began to work in commercial practice and  Florida was fertile ground for experimentation.

Bauhaus ideals spread across the US, morphing into geographical interpretations and regional iterations of modernism that adapted to landscape, climate and culture.  Florida, my home state, has a rich architectural legacy of modernism, expressed in many building types and structures erected in the state during the post-World War II era (1945-1975). 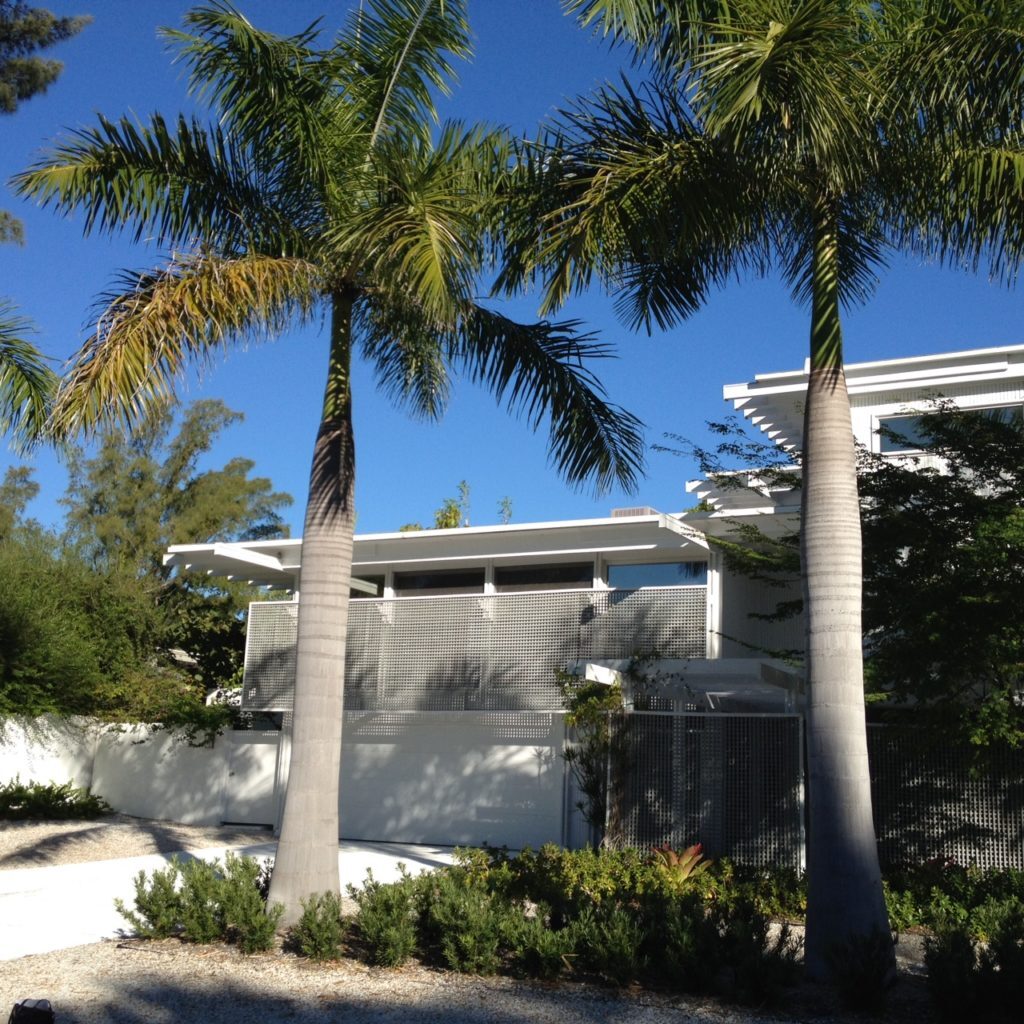 The Harkavy Residence in Sarasota, Florida

Florida Modernism is a genre that springboards straight off of the philosophy of Bauhaus. If you want to take a deep dive into Florida’s modernist architecture, I highly recommend the document, “Florida’s Mid-Century Modern Architecture 1945-1975.” This survey of the modern structures, architects and design trends of the sunshine state catalogs 50 Flagship Structures that should be further researched, documented, and considered for landmark designation. The study was undertaken by the University of Florida’s Historic Preservation Program, College of Design Construction and Planning. To download the report click here: 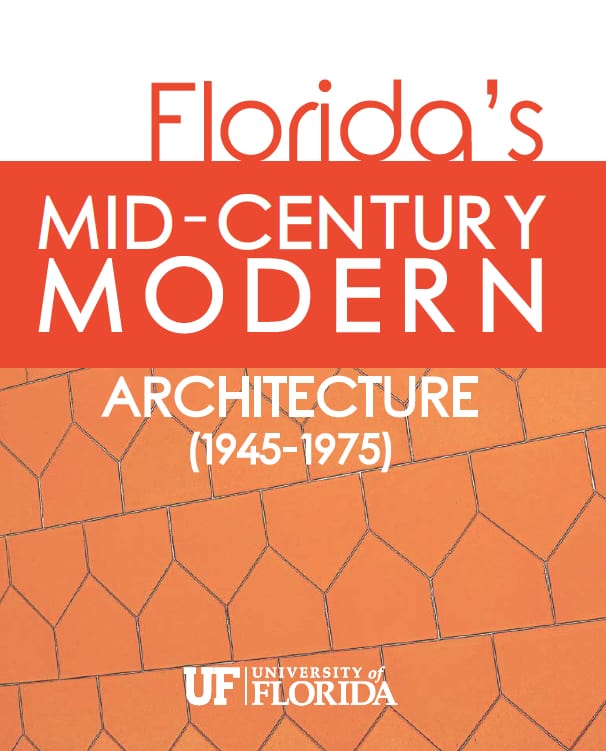 In Sarasota, Florida, a group of forward-thinking Bauhaus proteges formed the Sarasota School. Together they brought us iconic modernist homes including the emblematic Umbrella House, designed by architect Paul Rudolph. 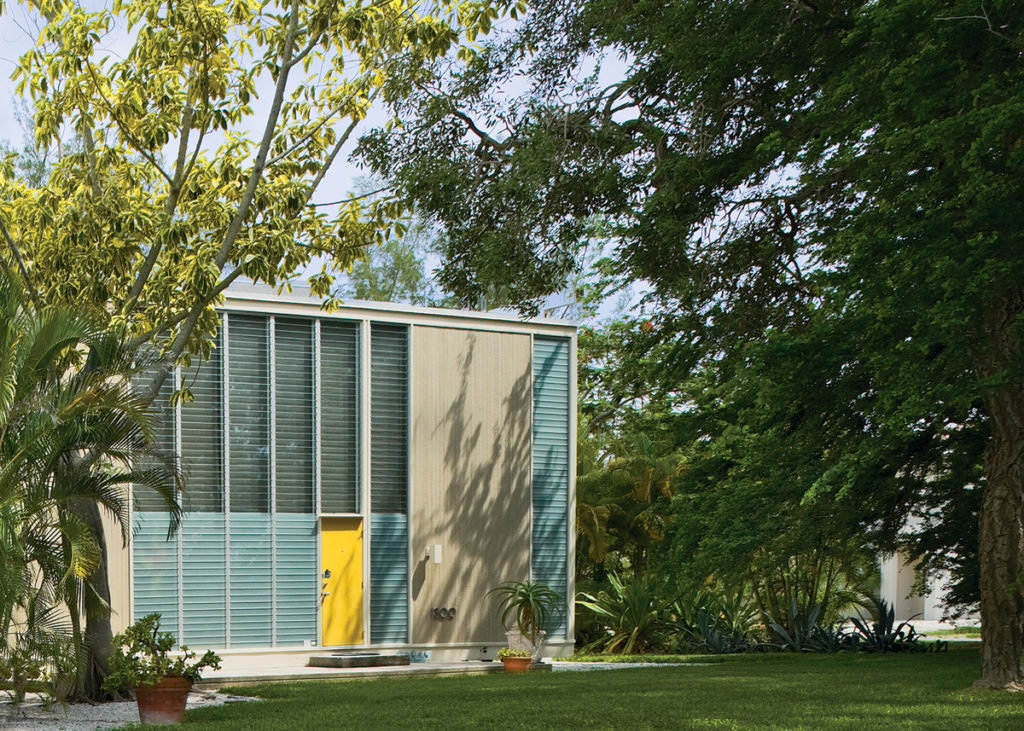 In 1953, Lido Shores developer Philip Hiss commissioned Rudolph to create one of the 20th century’s most iconic houses. The dominant feature of the house, the aptly named “umbrella,” was originally built of wood and used to shade the house from the intense Florida sun was lost in a storm in the 1960s. The full umbrella over the pool was restored in 2015 by Hall Architects. 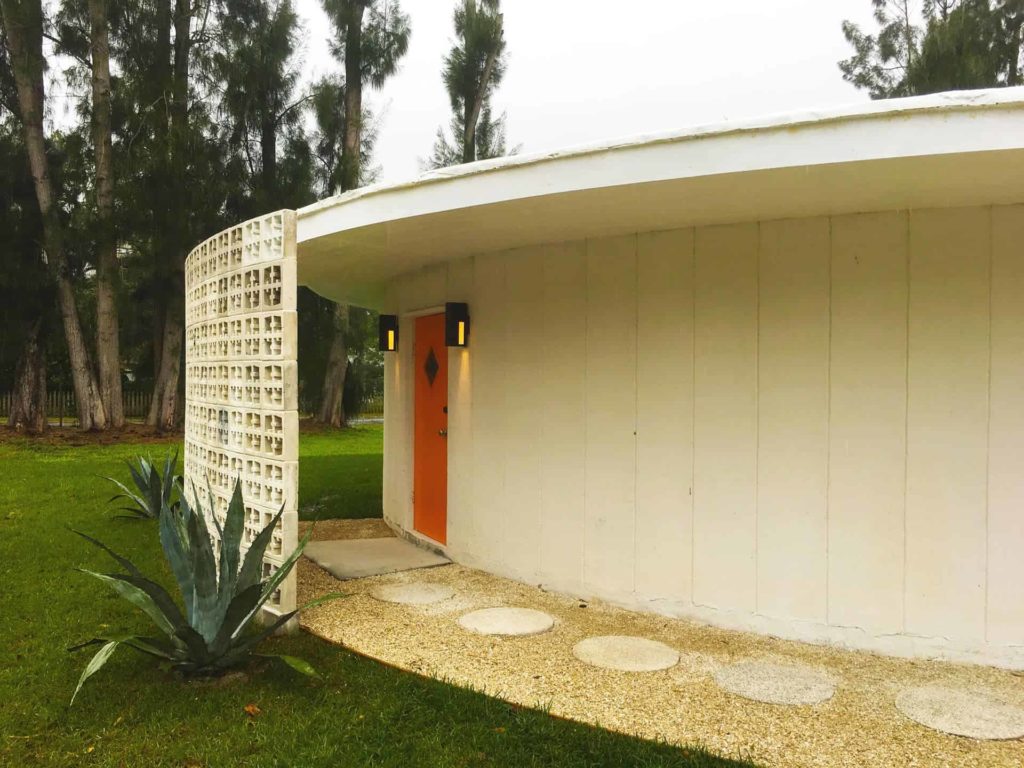 The recently restored “Other” Round House is yet another architectural jewel from the Sarasota School. Electrical engineer Frank Williams designed and built the Round House in 1971 as a one-story concrete cylinder with period breeze-blocks. The home stands out amongst typical rectilinear suburban houses of its time. 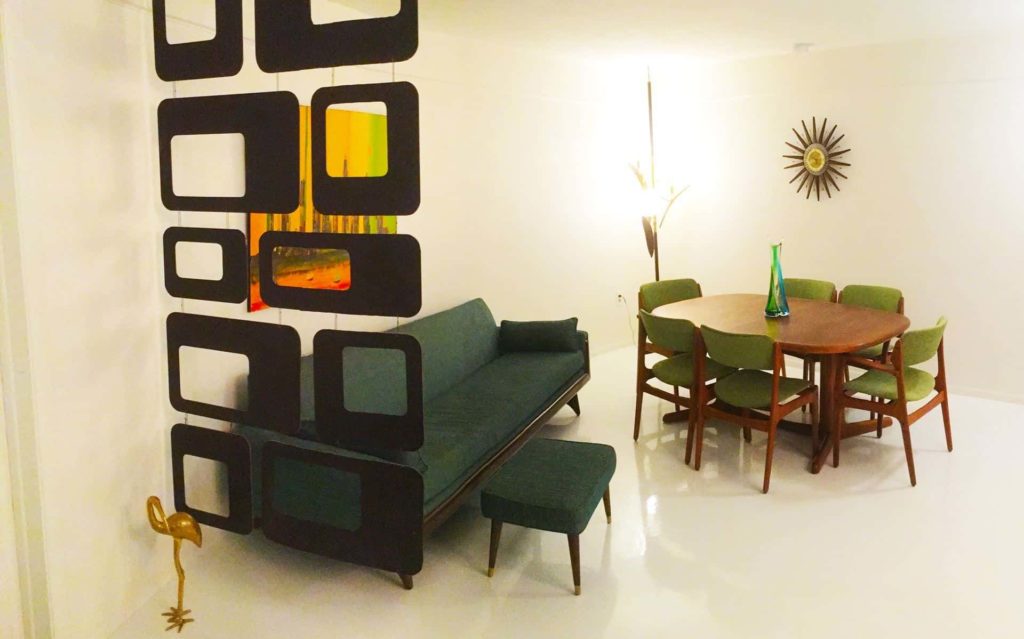 Interior of the “Other” Round House designed and built by electrical engineer Frank Williams. Photo credit: Sarasota Architectural Foundation

Rudolph working with architect Ralph Twitchell also designed The Revere Quality House in 1948.  The home’s restoration was made financially feasible with the construction of a detached companion house with a dynamic relationship between the two structures to justify the cost of the land. 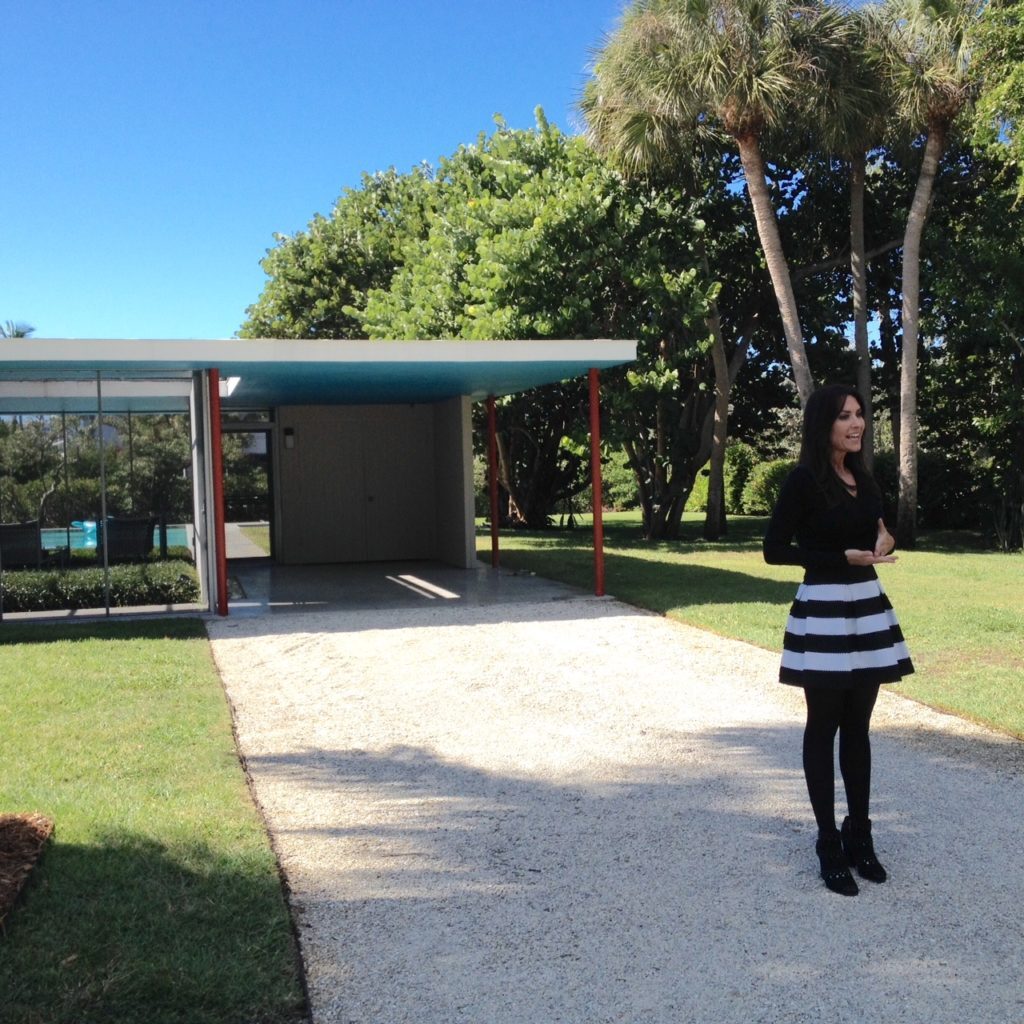 Karen LeBlanc, aka The Design Tourist, filming at The Revere Quality House in Sarasota, Florida, designed by architects Paul Rudolph and Ralph Twitchell.

The new house emerges both east and west of the existing house with walls of glass that take advantage of interior site views as well as views to the bayou and Gulf of Mexico beyond. The floor-to-ceiling heights were kept to a minimum to remain consistent with the language of the existing Rudolph + Twitchell house. The home’s original colors include Peacock Blue on the ceiling, Burnt Red on the lally columns and Buttercup Yellow in the kitchen and are each used once on site walls in the new composition. 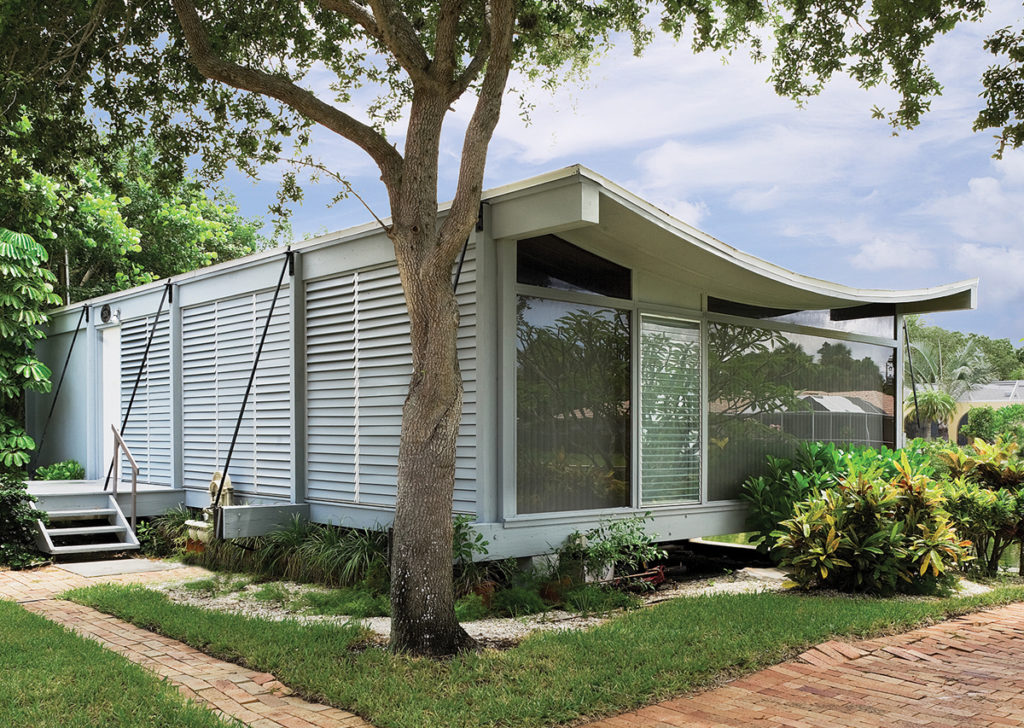 Rudolph and Twitchell also teamed up to design the Healy Guest House, also known as Cocoon House.  Built in 1950 and located on Bayou Louise Lane on Siesta Key, Cocoon House is a two-bedroom, one-bath, 760-square-foot cottage built as a guesthouse for Mr. and Mrs. W. R. Healy. The house gets its name from the technology used to build its roof: a polymer spray that Paul Rudolph saw being used at the Brooklyn Navy Yard on warships returning after WWII in order to “cocoon” or moth-ball them. Rudolph’s creativity made him realize that this material could also be used in the construction industry.

For architecture tourists interested in Sarasota School, I highly recommend attending the annual SarasotaMOD Weekend, this year held November 8 – 10, 2019 and presented by The Sarasota Architectural Foundation (SAF)  I invite you to check out my episodes of The Design Tourist featuring some of the Modernist homes on tour:

In Central Florida, the modernist movement expressed itself through the works of Taliesin-trained, Frank Lloyd Wright proteges such as Nils M. Schweizer. One of Schweizer’s most prominent and best-preserved residential designs is the Goldman House, recently listed on the National Register of Historic Places. 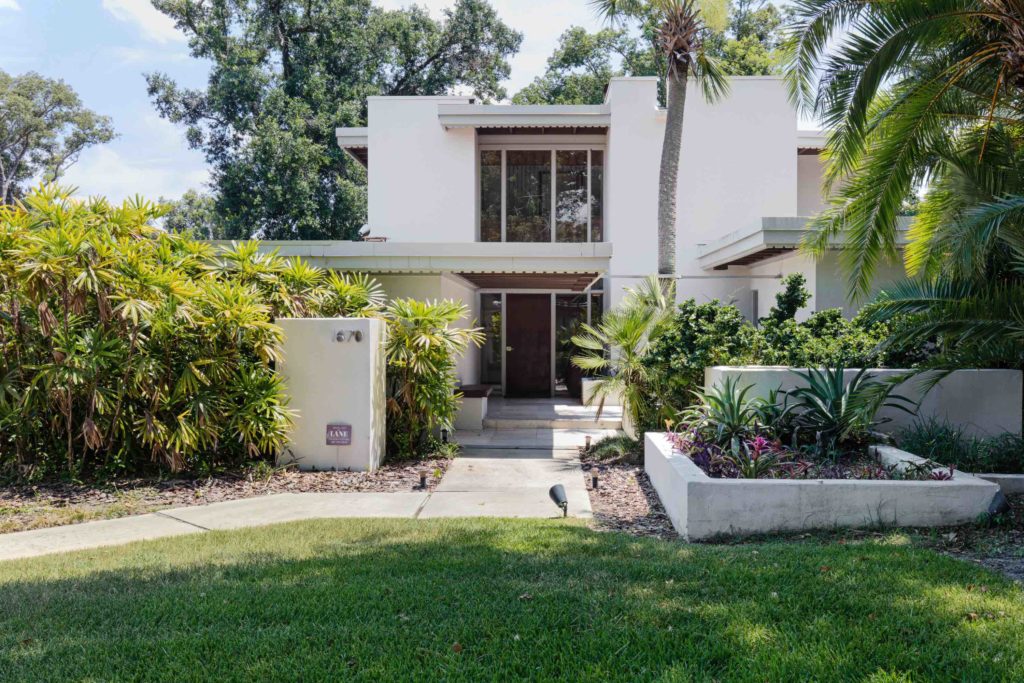 The Goldman House in Maitland, Florida designed by architect Nils M. Schweizer is now listed on the National Register of Historic Places. The Goldman House is a significant representation of modern design during the mid-twentieth century in Central Florida and is a rare example of the residential work of prominent architect Nils M. Schweizer. The home is located in the Maitland neighborhood of Dommerich Woods.

Schweizer practiced in the Orlando area and supervised many of the Frank Lloyd Wright designed buildings at Florida Southern College in Lakeland, Florida. Many call him the “Dean of Orlando architecture,” for his many notable residential and commercial structures including EPCOT’s Mexico Pavilion and the Orlando Public Library Addition. 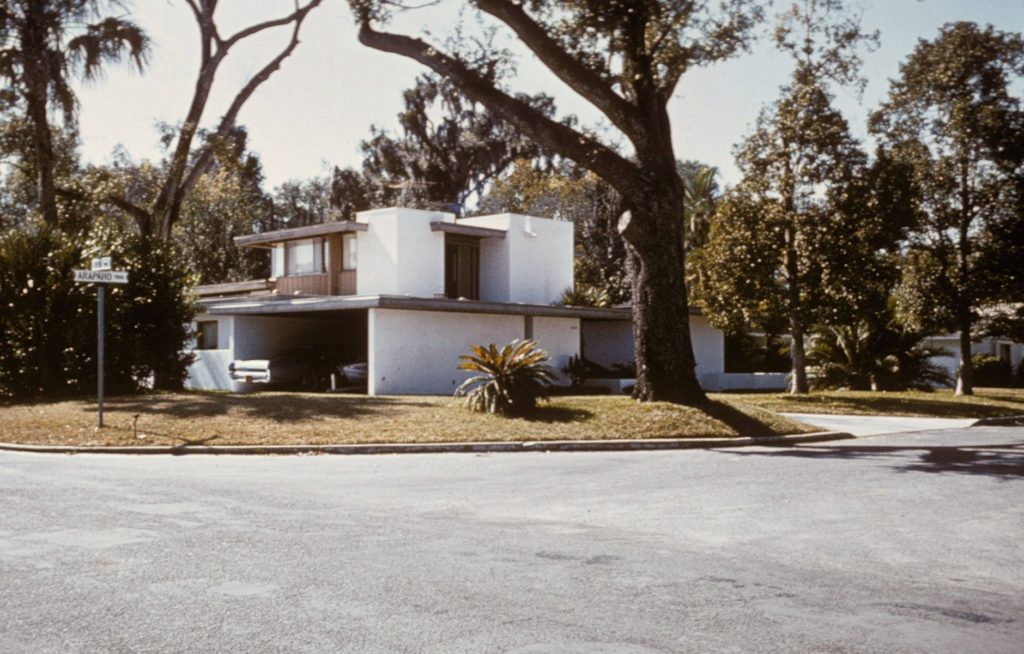 The Goldman House in 1965, the year it was designed and built. Nils M. Schweizer designed the home and the Goldmans acting as their own general contractor, supervised construction.

In 1965 Siegmund and Marilyn Goldman commissioned Schweizer to design a family home for the couple and their two children in a residential suburb north of Orlando. Schwizer designed the home and the Goldmans, who operated S.I. Goldman, Co., one of the largest heating and cooling contractors in the region, acted as their own general contractor. They build the 3385-square foot modernist home at a cost of $35,000.  Constructed of walls of concrete block set on a poured concrete slab, the white stucco exterior contrasts with the lush greenery growing from concrete planters framing the primary facade. 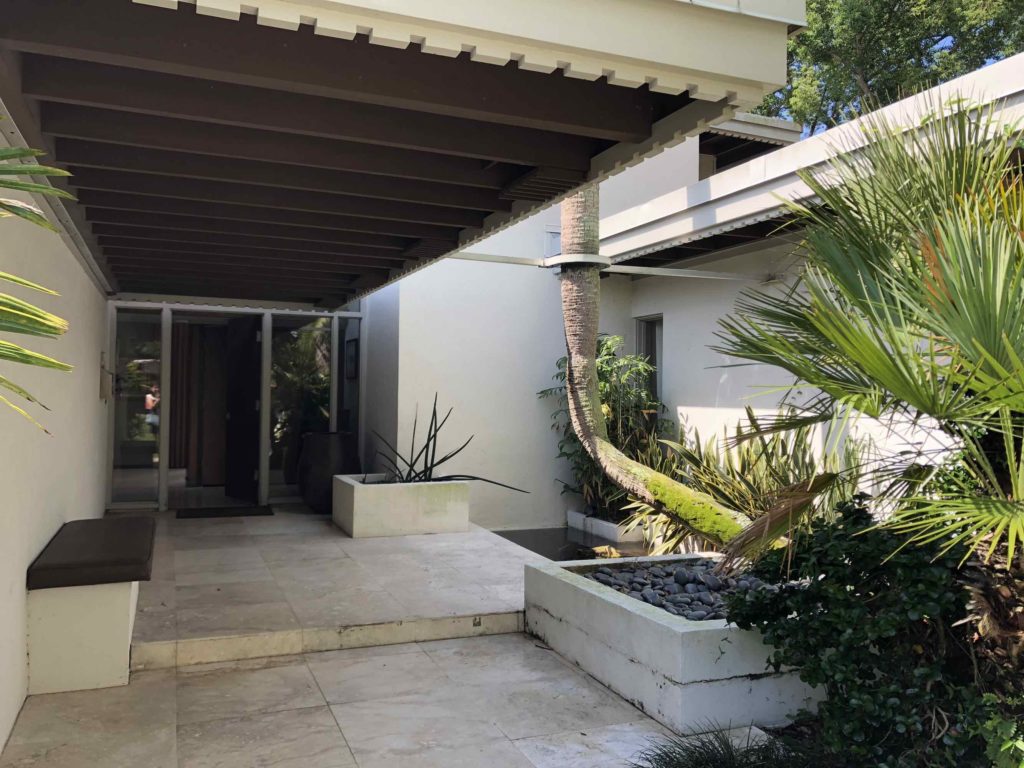 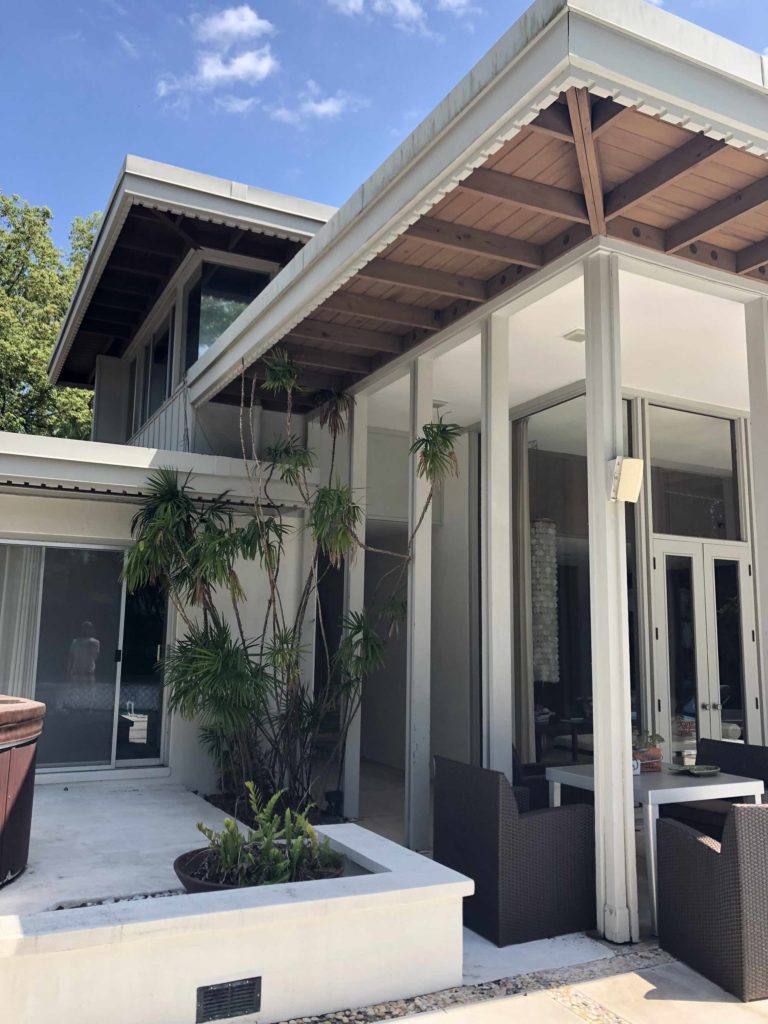 Schweizer incorporated his trademark notched dentil pattern on the wooden cornice line of the Goldman Home in Maitland, Florida. 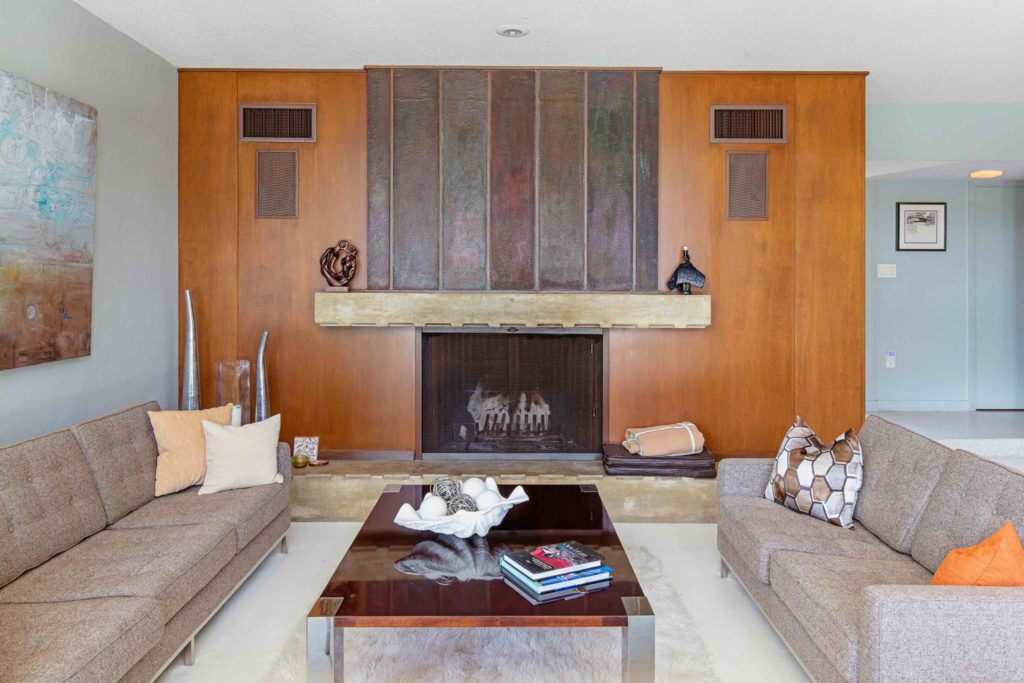 The sunken living room features a fireplace hearth and floating mantel shelf are cast concrete. The mantel has a notched dentil edge matching the pattern of the cornice line around the house. Above the mantel, the copper wall covering is hand-hammered, created Marilyn Goldman at the request of Schweizer.

Florida also claims a residence designed by  Frank Lloyd Wright, The Lewis Spring House in Tallahassee built in 1954.   Wright created an unconventional pod-shaped wedge to mold to a five-acre lot. He also tasked Schweizer to supervise the construction of the two-bath, three-bedroom house. 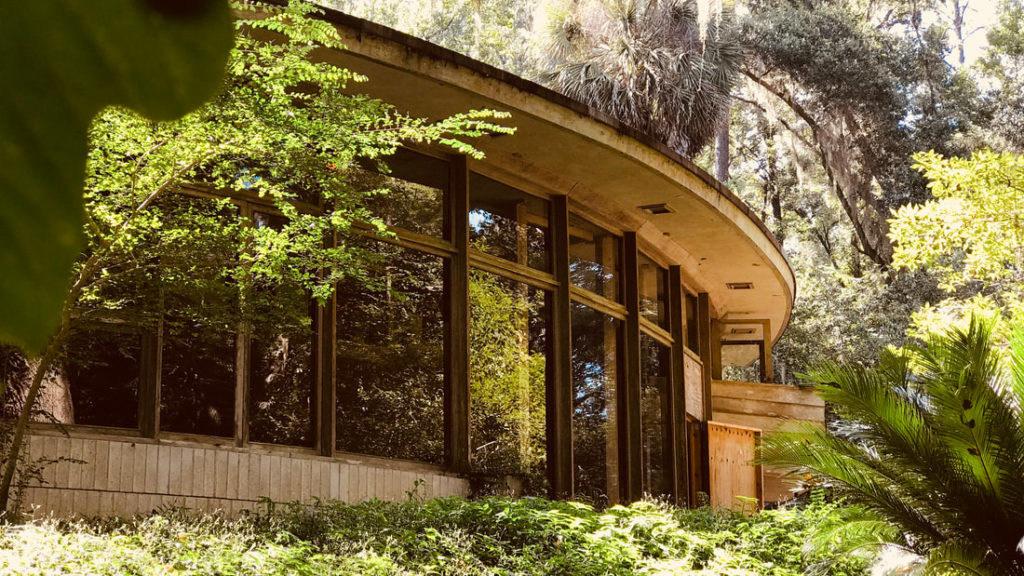 The Lewis Spring House in Tallahassee, Florida is the only residence designed by Frank Lloyd Wright in the state. There is a preservation effort underway to restore the home.

Spring House was built at the same time as Wright and Schweizer were finishing buildings at Florida Southern College in Lakeland. The two-story home is designed as a hemicycle, a rare example of Wright’s work in this style. The open interior plan of the house is characterized by concentric and intersecting circles. A circular utility tower on the west side houses the kitchen, baths, heating, plumbing, and ventilation. 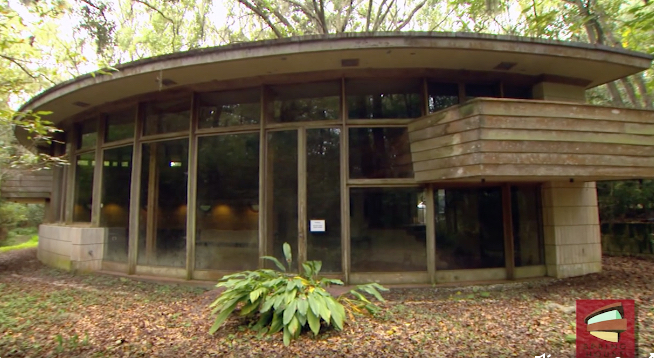 The east side, arced facade of the Spring House is a curtain wall of wood-framed, fixed, plate glass mirrored on the interior by the arc of a cantilevered balcony overlooking the open living area.

The first story and the tower are constructed of unpainted Ocala block with deeply raked horizontal joints set on a polished concrete slab tinted with red pigment. Red cypress weather-board is used on the interior and exterior to distinguish the second floor. Transom windows at the bedroom level provide light and air with small, semi-circular windows in the masonry wall beneath. Spring House is listed on the National Register of Historic Places and on-going preservation efforts by The Spring House Institute, Inc.,  intend to fully restore the building.

Florida’s Mid-Century Modern Resources, 1945-1975, a historic structures survey and analysis through the University of Florida, makes a case for the preservation of Florida’s midcentury modern architectural legacy. The report notes, “The state’s mid-century modern architecture is now reaching an age when many of these resources should be assessed and their significance evaluated for meeting the criteria for listing on the National Register of Historic Places and/or designation as local landmarks.”

For more on Central Florida’ s rich modernist legacy, I invite you to read my article profiling the Maitland Art Center, a rare example of Mayan Revival modernism and a National Historic Landmark.

Stunning Quartz Worktops For Your Kitchen

Most Scenic Islands in Australia You Have to...

How to Make Your Wedding Stand Out

How to Modernize Your Outdated Home

Design Mistakes That Are Stopping You From Relaxing...

The Many Health Benefits Of Home Hot Tubs