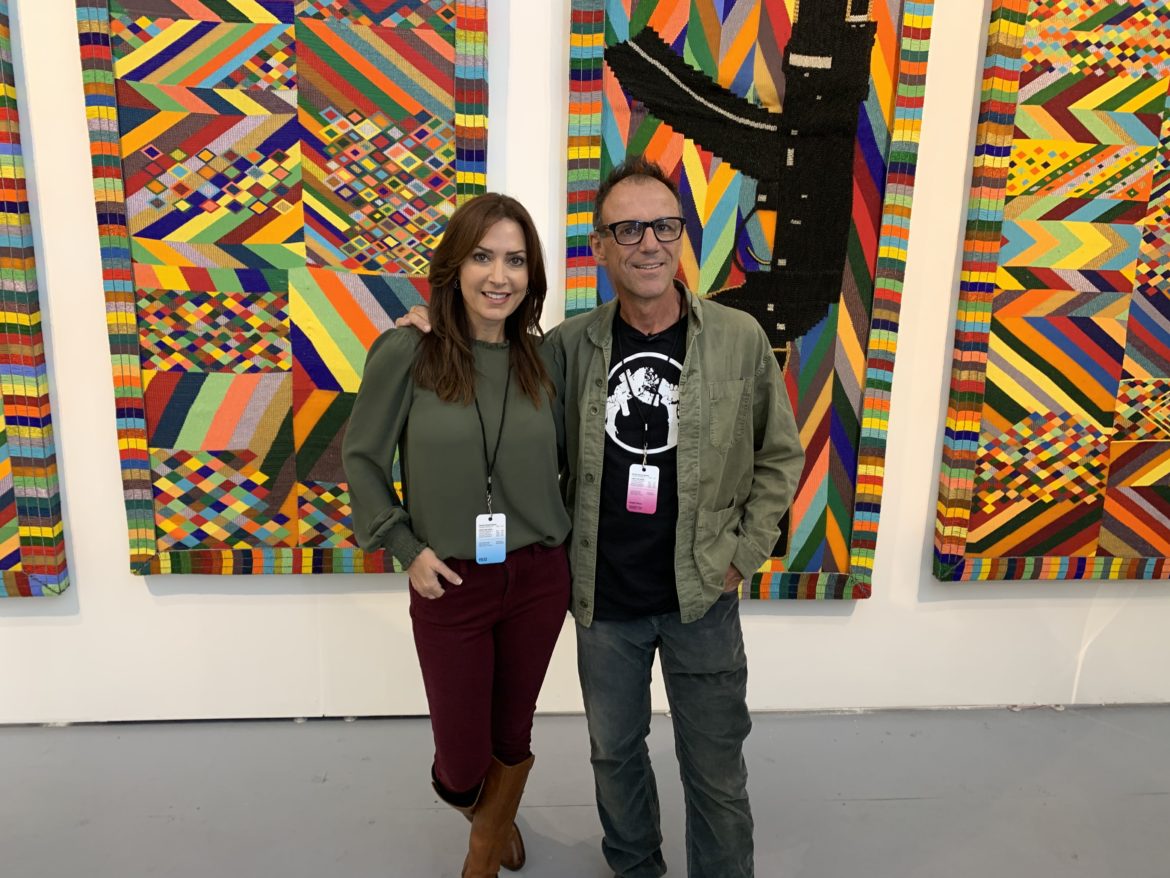 The Idea: Humanitarian Art That Reconciles South’s Africa’s Apartheid Past

The Art: The Casspir Project 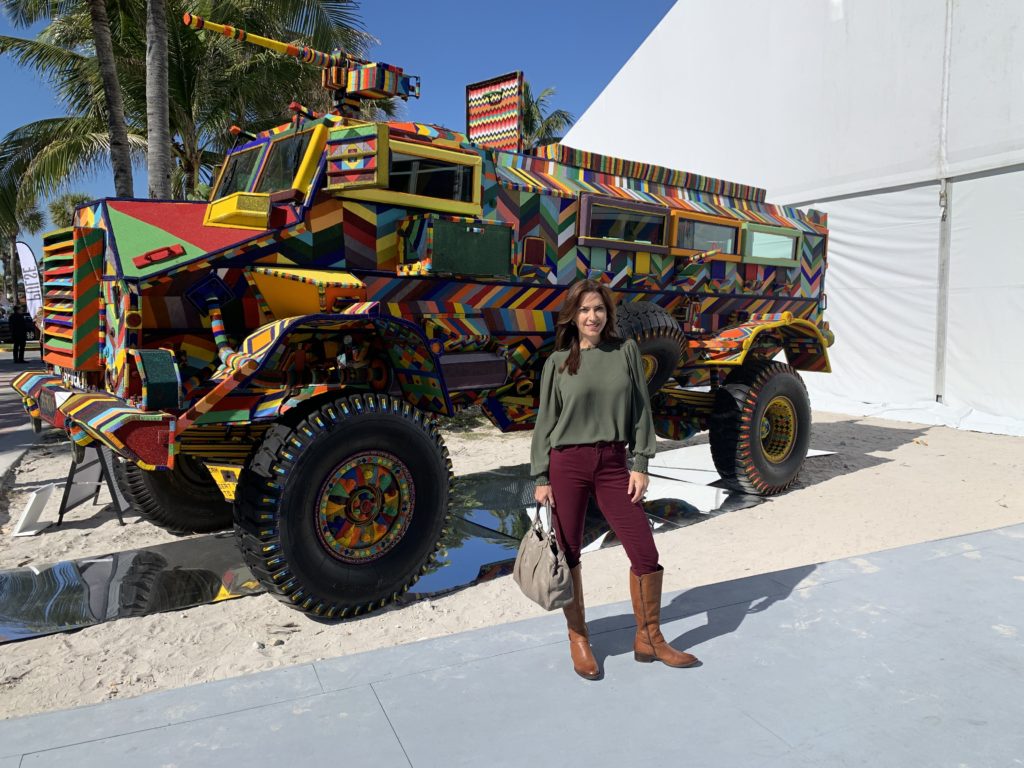 An overarching theme to the creative works that intrigued me during Miami Art Week was about a hyperawareness of social issues. Artwork with a confessional quality that offered insight into the artist’s personal politics resonated deeply.

At the entrance to PULSE Art Fair, I encountered an armored all-terrain vehicle covered in colorful beads by South African artist Ralph Ziman. It was both disturbing and oddly beautiful—an emotionally jarring juxtaposition. The beaded tank is called a Casspir, used by the South African Police and Defense Force against civilians during apartheid. Ziman named it  ​SPOEK 1 and it weighs 11-tons and is covered in 70 million glass beads, arrayed in panels of traditional patterns​ by African artisans from Zimbabwe and the Mpumalanga province of South Africa, including women of the Ndebele tribe, known for their craftsmanship. 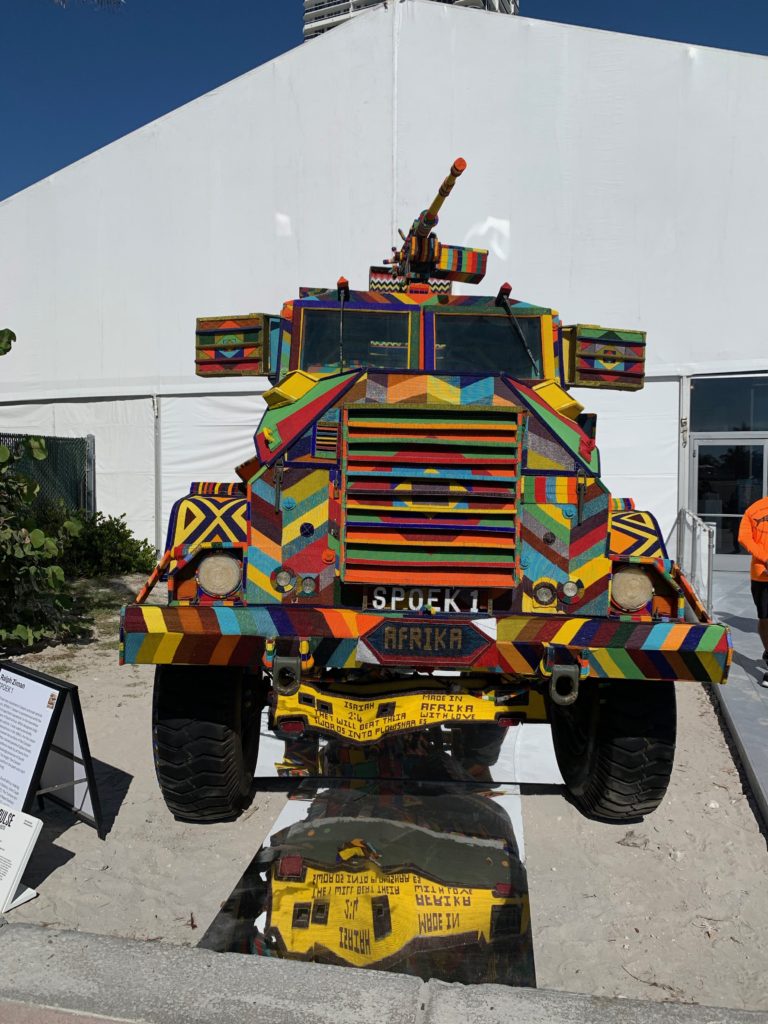 SPOEK 1 ​ and The Casspir Project was presented by The Rendon Gallery at Miami Art Week, December 5-8, 2019 as part of the special projects section at PULSE Art Fair.

His art is about making amends with South Africa’s apartheid history by reframing emblems of violence and oppression into art objects. “In Africa, there’s a belief that when you touch something, you take away its power. By covering the Casspir with beads, it became non-threatening. People could come up, put their hands on the tank and by doing so, take away its power to oppress,” Ziman explains. 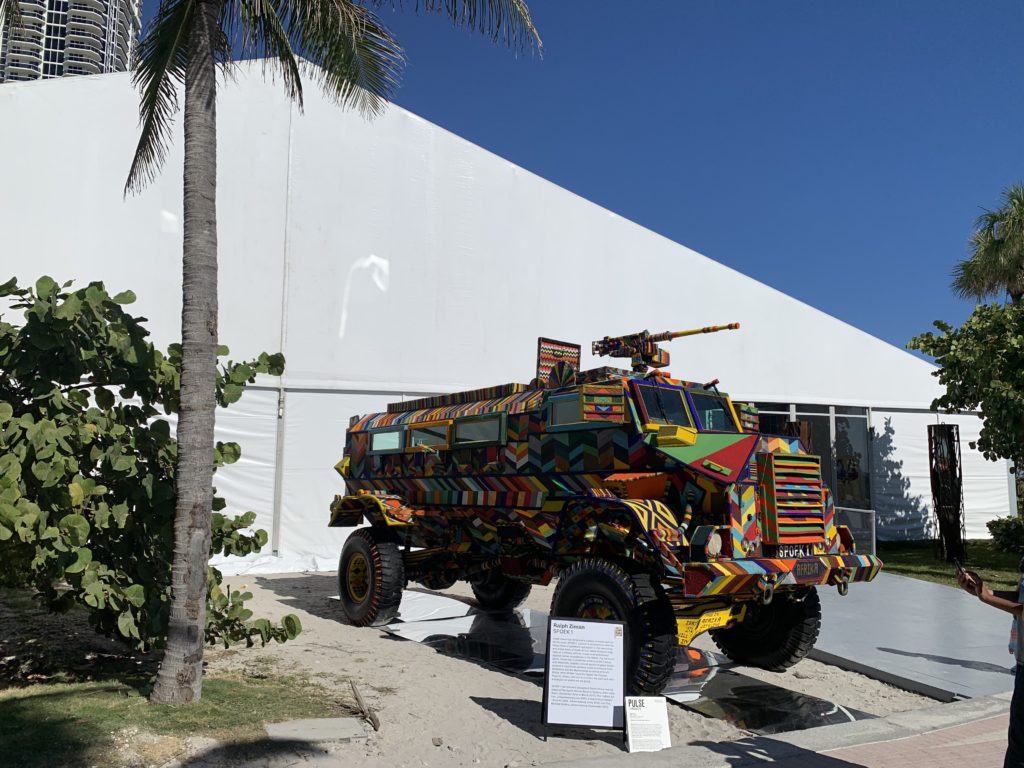 The Casspir has been transformed into a work of art for ​SPOEK 1, ​ its surfaces covered in 70 million, elaborate and brightly-colored glass beads, arrayed in panels of traditional patterns​.

The name “Casspir,” is an anagram combining the name of the designer (the Council for Scientific and Industrial Research, CSIR) and the end-user (the South African Police, SAP). Ralph, working with African artists. 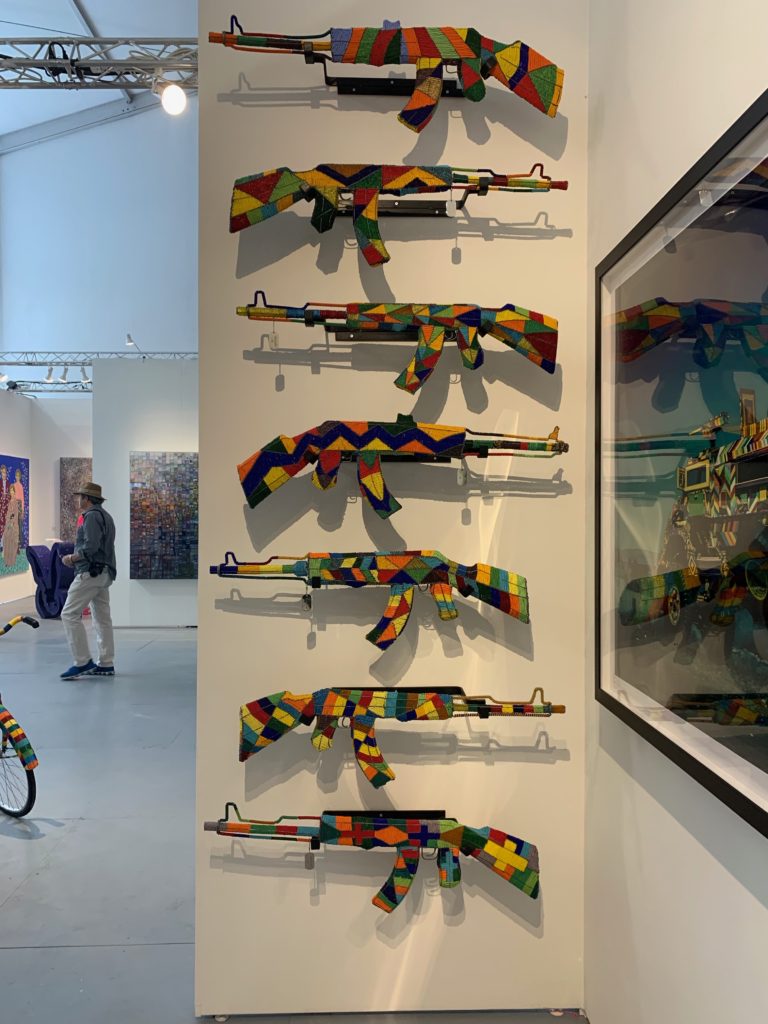 Glass beads cover AK-47s as part of The Casspir Project by South African Artist Ralph Ziman. His works were on view at PULSE Art Fair during Miami Art Week.

Ziman also embellishes weapons with colorful glass beads as social and geopolitical commentary.  “We originally started with the AK 47 as a response to the arms trade coming into Africa. I was constantly seeing photographs in the press of Somali rebels and pirates. There were AK 47’s everywhere. I thought that it would be great to do this reversal of the arms trade where we make non-lethal, beautiful weapons in South Africa and ship them to the rest of the world. The root of the project is its humanitarian mission to support the families of South African artisans. With every work that sold, the proceeds would amount to a month of living expenses for an entire family,” Ziman says. 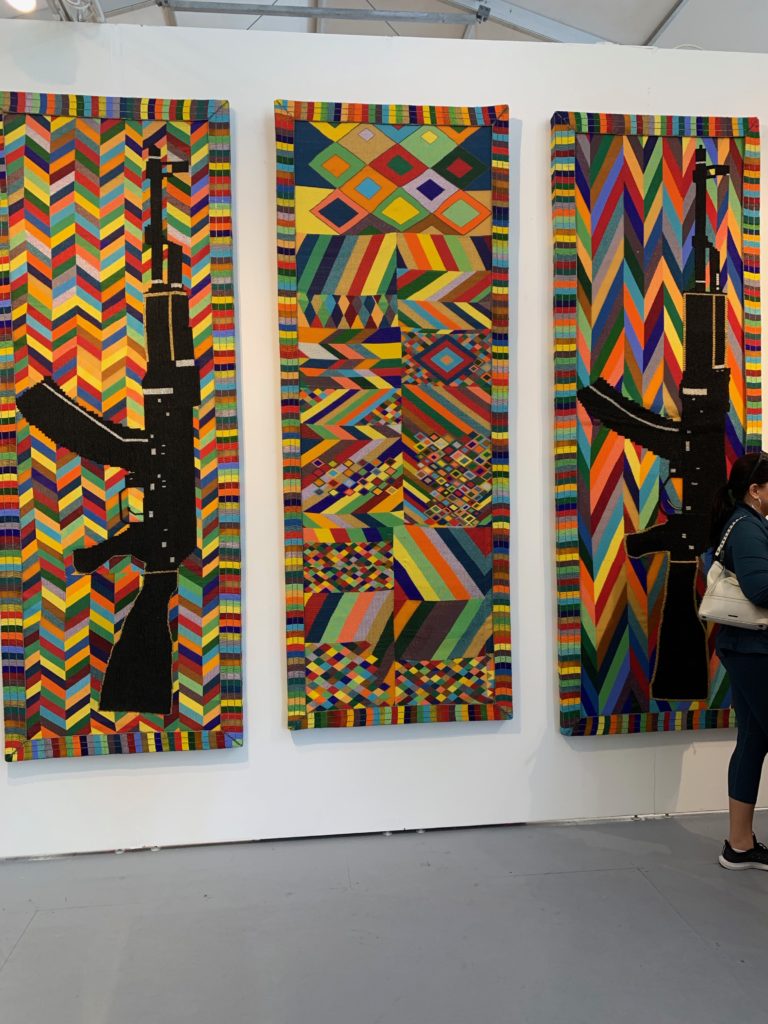 He employs 10 artisans full time working out of his studio in Johannesburg. He discovered these artists selling beads and wire sculptures to tourists on the streets of the city. “They were hustling to make a living. We wanted to create an environment where we could pay everybody a living wage and pay for their kids to go to school,” Ziman explains.

The Casspir was built during the apartheid as a vehicle for the South African police force to patrol and control neighborhoods. “When I left South Africa in the early eighties, it was the height of apartheid, policing involved a bunch of Casspirs with white cops sitting on top with automatic weapons. The Casspir was developed by like the white African military, so while it’s South African, it was very much a white invention,” Ziman remembers. 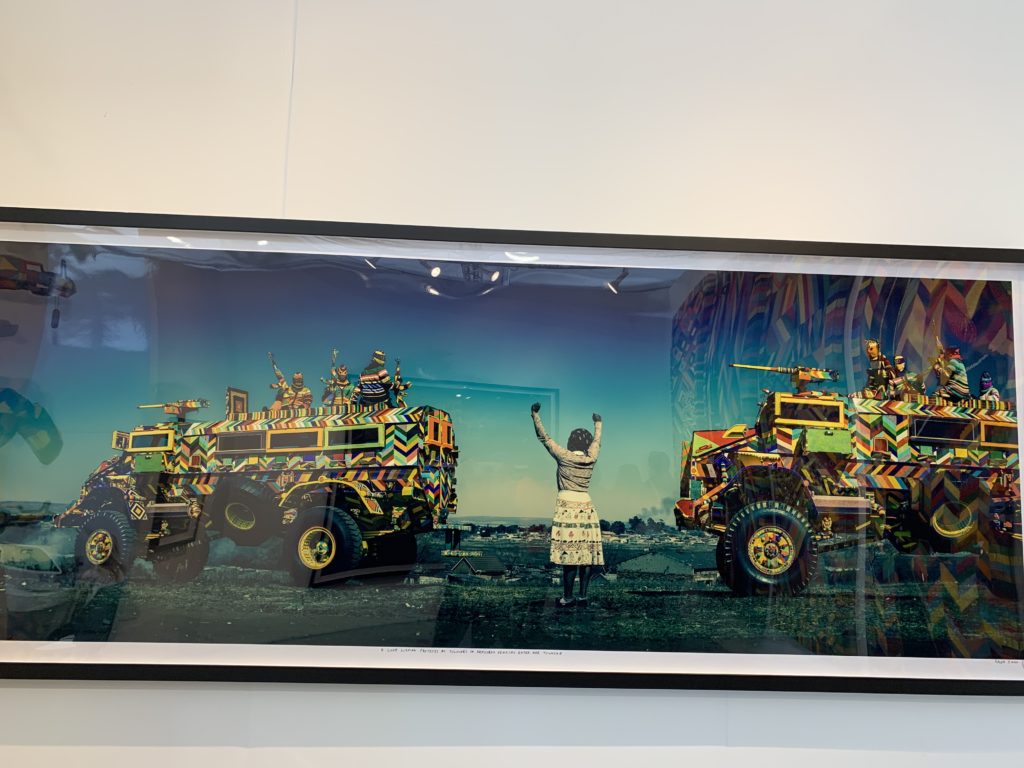 Photography that is part of The Casspir Project by South African Artist Ralph Ziman. This image shows two Casspirs covered in glass beads.

He bought the 1981 police Casspir from a scrap yard and rebuilt it to factory standards. It took more than 100 artisans three years to cover the tank in colorful beads. “This project is about owning up to our history of apartheid and the Casspir and transforming that,” Ziman adds. 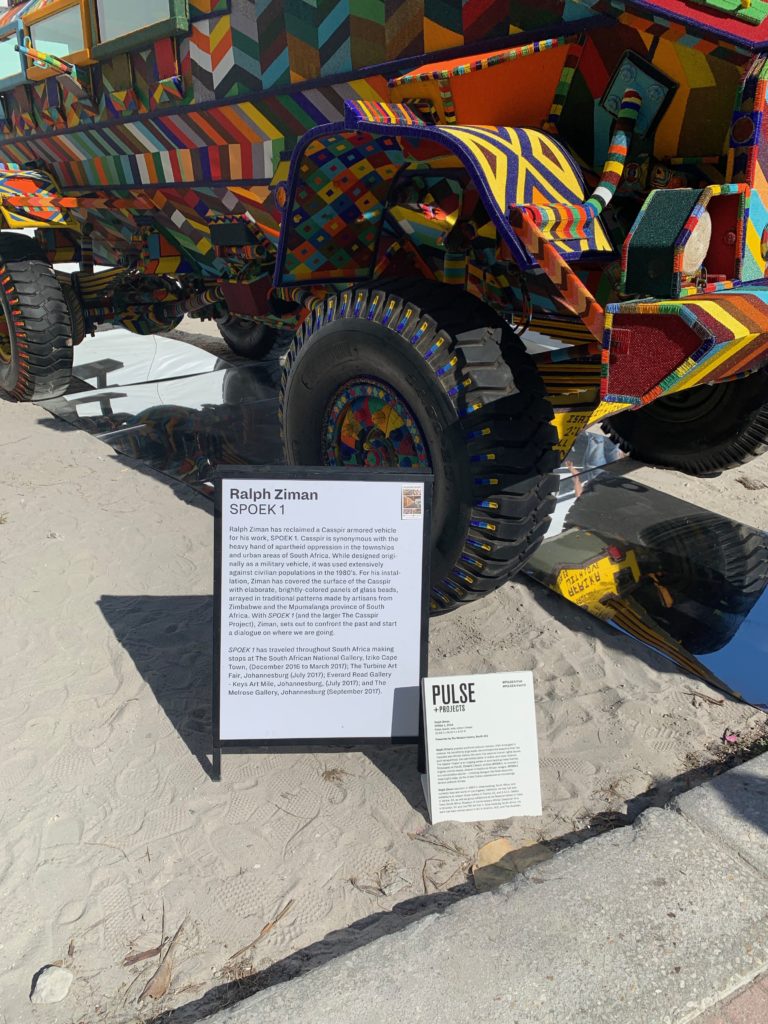 Ralph Ziman was selected for the special project section of the 2019 edition of PULSE Art Fair where he will present ​SPOEK 1, an 11-ton decommissioned, apartheid-era Casspir vehicle that has been restored and reclaimed

The South African government decommissioned Casspirs after the apartheid leaving their hulls in scrap yards as a relic of their tumultuous past. The United States bought several to use during the Iraq war years, r​ebranded as the MRAP (Mine-Resistant Ambush Protected)​. ​After the war, these Casspirs were given free of charge to local United States police departments under the Pentagon’s 1033 Program. 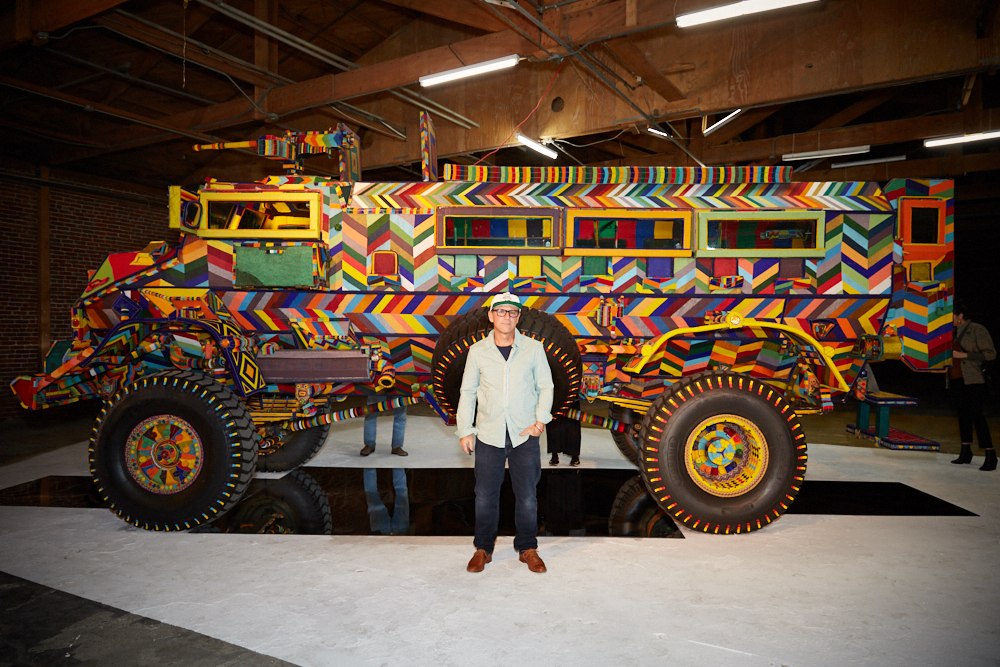 “I felt an urgency to do this project because I started seeing these Casspir vehicles showing up on the streets of America, in the news, in protests such as Black Lives Matter. I wanted to tell our joint history with the Casspir,” Ziman says.

Ziman says The Casspir Project aims to subvert the narratives of violence and oppression by celebrating South Africa’s creativity and community. 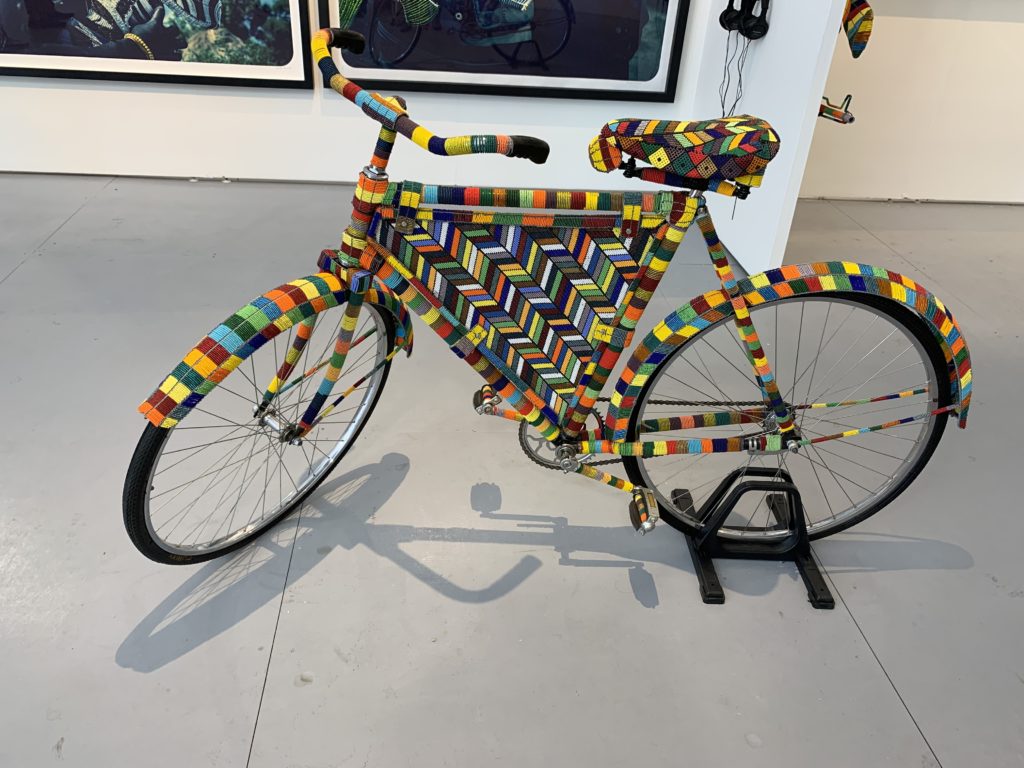 Ralph Ziman was born in 1963 in Johannesburg, South Africa, and currently lives and works in Los Angeles, California.