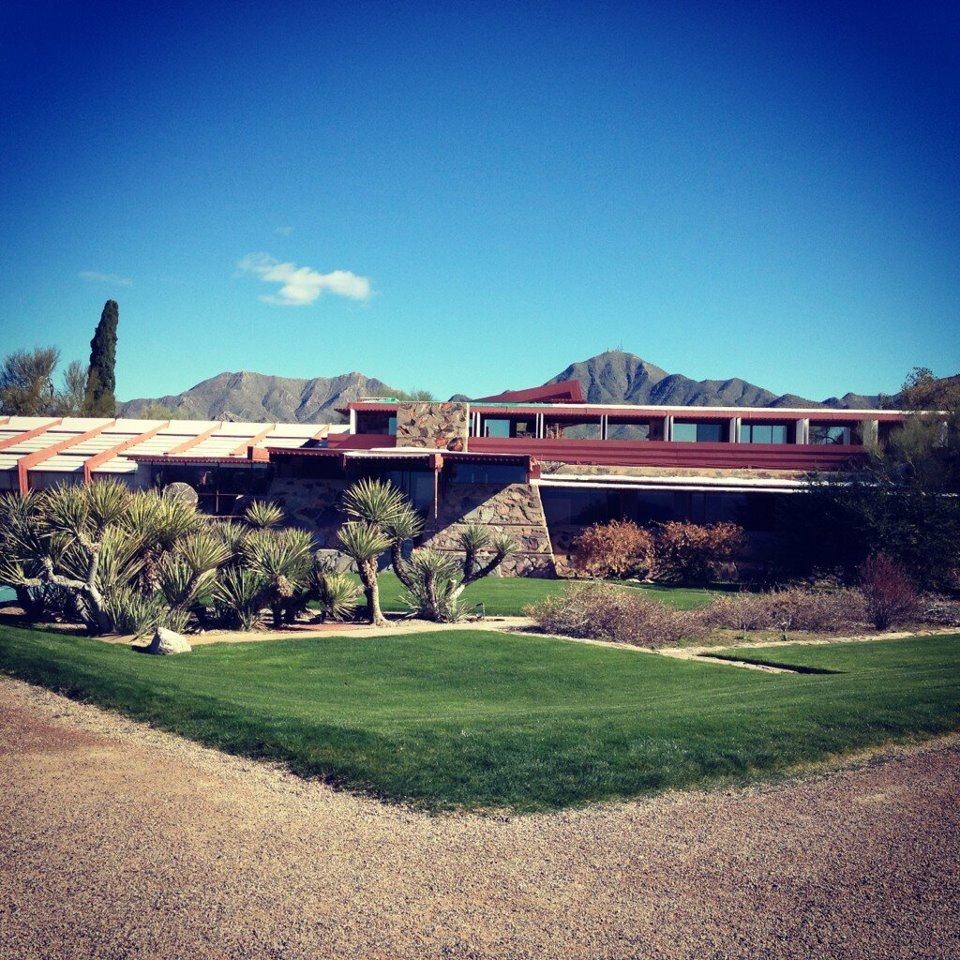 Internationally renowned architect Frank Lloyd Wright’s winter home and studio, Taliesin West is one of eight Wright buildings recently inscribed on the UNESCO World Heritage List. Located in Scottsdale, Arizona, Taliesin West serves as a prime example of Wright’s organic architecture built with a deep connection to the surrounding desert. Wright established Taliesin in 1937 constructing it out of the rocks and sand of the Sonoran Desert to blend with the scenery of the lower McDowell Mountains. This new form of desert architecture and established a legacy that draws visitors worldwide to tour Taliesin West, a National Historic Landmark and the living laboratory of Wright’s ideas. 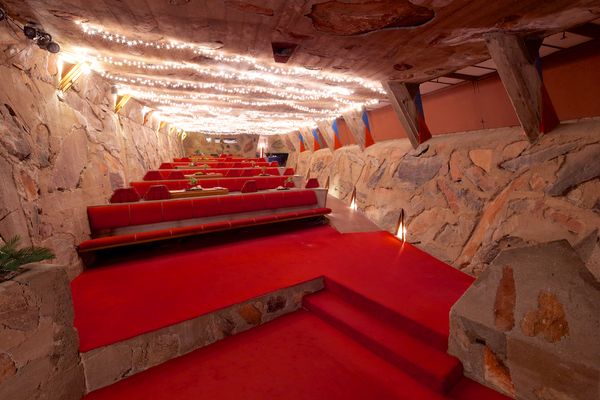 The tour takes visitors through Wright’s private living quarters, added by Wright in 1940, contain a living room, private bedroom and work space. (Wright and his wife Olgivanna’s kitchen and bedrooms were restored to their likenesses from 1959, the year Wright died) Recent transformations at Taliesin West have focused on eco-friendly practices, such as the installation of a 250-kilowatt solar power system. Eventually Taliesin West will become a net-zero facility, meaning it will produce as much or more power than it uses. Taliesin West also has a cabaret theater, music pavilion, and drafting studio. Check out this video for some of the highlights:

Frank Lloyd Wright passed away in 1959 just two months shy of his 92nd birthday in Arizona leaving an architectural legacy in Scottsdale. For more, go to  (www.franklloydwright.org),

For architecture tourists, Scottsdale has put together a Frank Lloyd Wright-inspired itinerary that includes his noted design, the spire at the northwest corner of the Scottsdale Promenade (www.scottsdalepromenade.com) shopping center in North Scottsdale. Originally designed by Wright for the Arizona State Capitol building, the structure is 20 feet wide at the base and 125 feet tall. It is framed with steel, painted in a copper tone, glazed with plastic, and illuminated internally at night. Another notable Wright-designed structure is in nearby Tempe, Arizona, the auditorium at Arizona State University. Wright designed ASU Gammage(www.asugammage.com) based on earlier renderings for an opera house in Baghdad, Iraq that was never built. The auditorium features two long ramps that extend from the second level of the theater out into the parking lot. The ramps are dotted with lamp posts formed into interlocking circles and arches. These ramps were meant to be “arms” welcoming people to Arizona. The project incorporates multiple shades of terra cotta with accents of aqua and teal, and it is meant to be as acoustically perfect as possible.

Other architectural attractions are designed by Wright’s protégées  include the Sanctuary on Camelback Mountain (www.sanctuaryaz.com),  originally designed by architect Hiram Hudson Benedict, an apprentice of Wright. 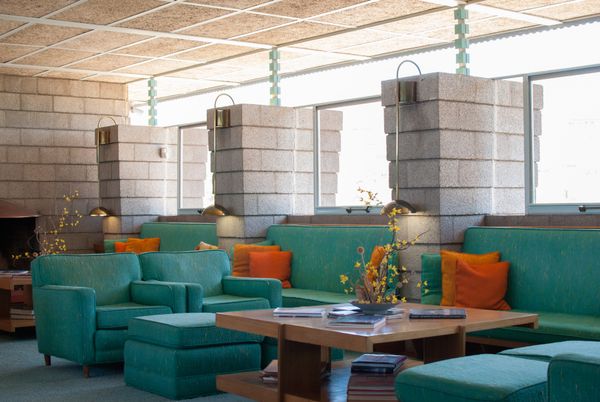 Wright consulted on the design and construction of the famous Arizona Biltmore Resort built in 1929 working with lead designer Albert Chase McArthur. The resort has become an architectural landmark, and it is one of Arizona’s most well-known sights.  The Biltmore Sprites that greet guests as they arrive at the Arizona Biltmore were created by Wright and sculptor Alfonso Lannelli. These geometric architectural statues were conceived in 1914 for the specific purpose of adorning and watching over Midway Gardens, once a center for entertainment, dining and music on Chicago’s lakefront. Most of the Sprites met a premature and unfortunate demise during Prohibition. Years later, the remaining pieces were donated to the Arizona Biltmore, which has been their home since October 1985. Replicas of the sprites can be purchased at Taliesin West.

The Soleri Bridge and Plaza in downtown is designed by Wright student, Paolo Soleri as a piece of public art and the second pedestrian-only bridge to connect the Scottsdale Waterfront area with SouthBridge and downtown Scottsdale.

Soleri came to the United States in 1947 from Italy and spent nearly two years in fellowship with Wright at Taliesin West and Taliesin in Wisconsin.  In December 2010, Scottsdale became the home of the first and only Soleri-designed bridge ever to be built. The bridge, framed by a 22,000-square-foot plaza that includes panels designed by Soleri and produced at Cosanti studio and houses the Goldwater Bell assembly. Visit Soleri Bridge and Plaza:.

Soleri also established the Cosanti Foundation(www.cosanti.com), which is a not-for-profit educational organization. The Foundation’s major project is Arcosanti, a prototype town for 5,000 people designed by Soleri that has been under construction since 1970. Located at Cordes Junction in central Arizona, the project is based on Soleri’s concept of “Arcology,” architecture coherent with ecology. Arcology advocates cities designed to maximize the interaction and accessibility associated with an urban environment; minimize the use of energy, raw materials and land, reducing waste and environmental pollution; and allow interaction with the surrounding natural environment.

The iPorn Art of Michael Seri