Jordan Vineyard and Winery Expresses Terroir Beyond The Wine Glass 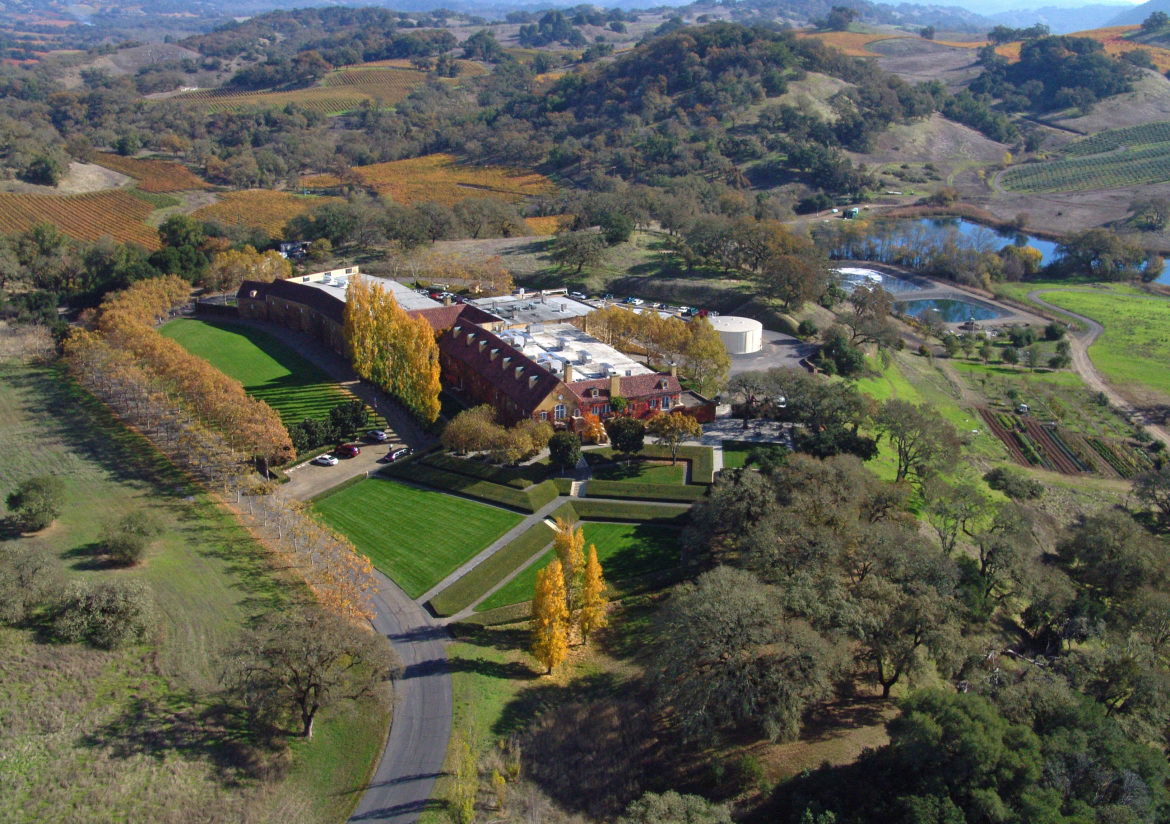 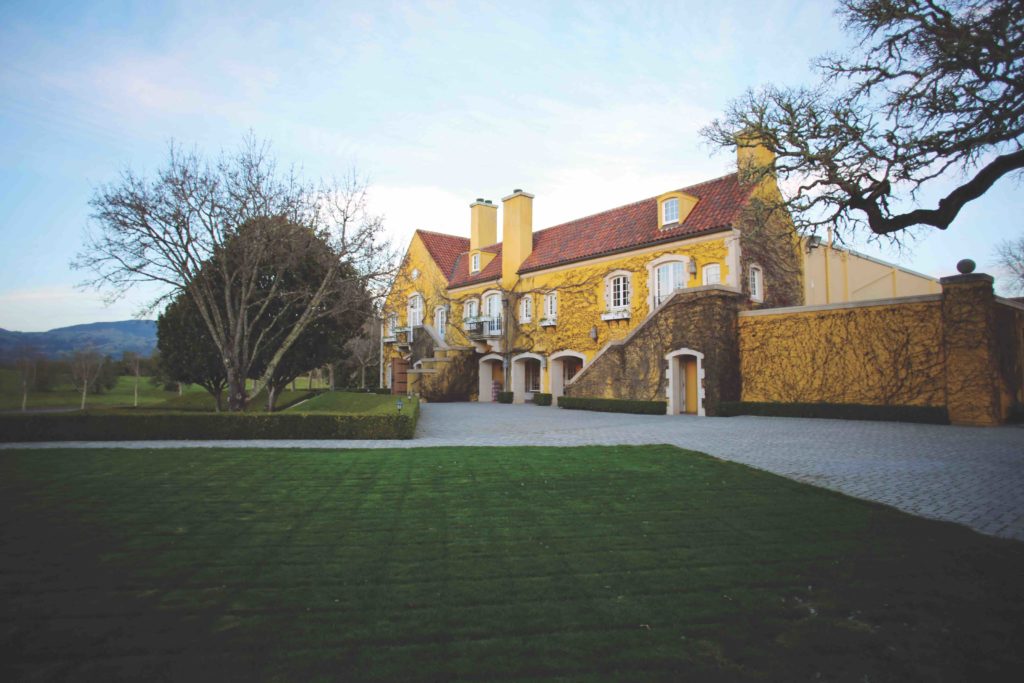 On a recent media trip to Sonoma County, California, I visited Jordan Vineyard & Winery, located in Alexander Valley, five miles north of the town of Healdsburg to experience its symbiotic relationship between food and wine. 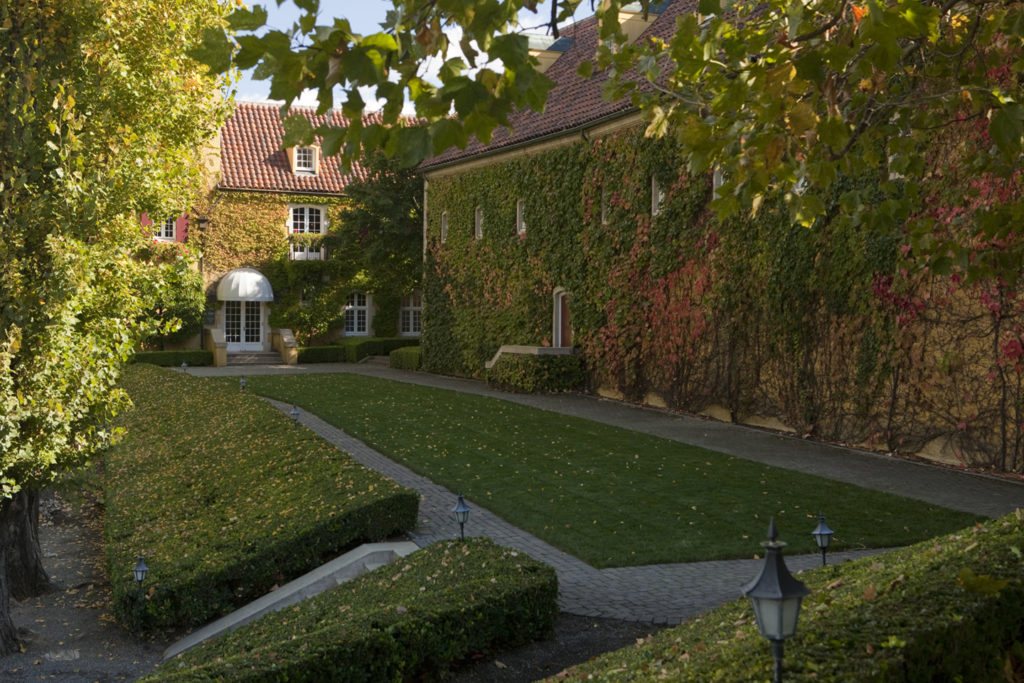 Jordan was founded as a culinary-focused winery in 1972 by Tom and Sally Jordan who drew inspiration from the great wine estates of France. Today, Jordan operates under the guidance of second-generation vintner John Jordan and has built a reputation for its food-focused, restaurant-quality wines. “The Jordan family came into wine from being foodies because they loved to travel and eat. They were inspired to get into the wine business with an interest in Bordeaux-style wines,” says Lisa Mattson, Director of Marketing and Communications at Jordan Vineyard and Winery. 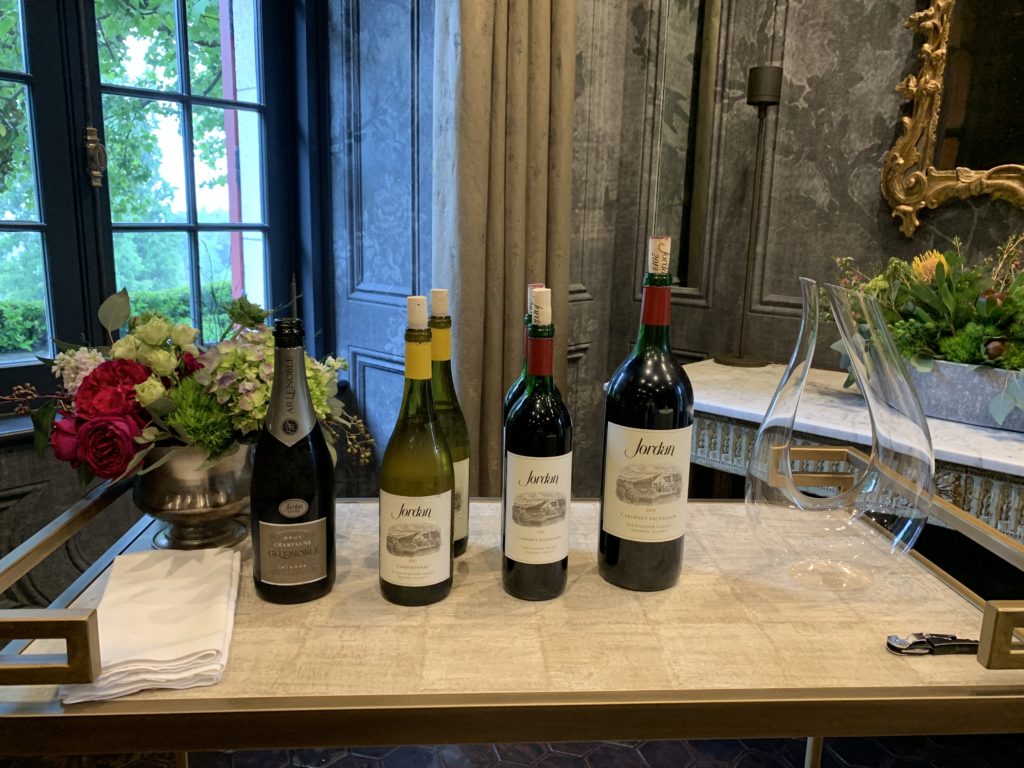 Jordan sells primarily to restaurants— about 70 percent of their cabs with the remaining 30 percent available in wine stores.  Rob Davis, the winemaker, has handcrafted every vintage of Jordan since the inaugural 1976 and is the second-longest tenured winemaker in the US. He is known for a European style of winemaking that isn’t done much in California. 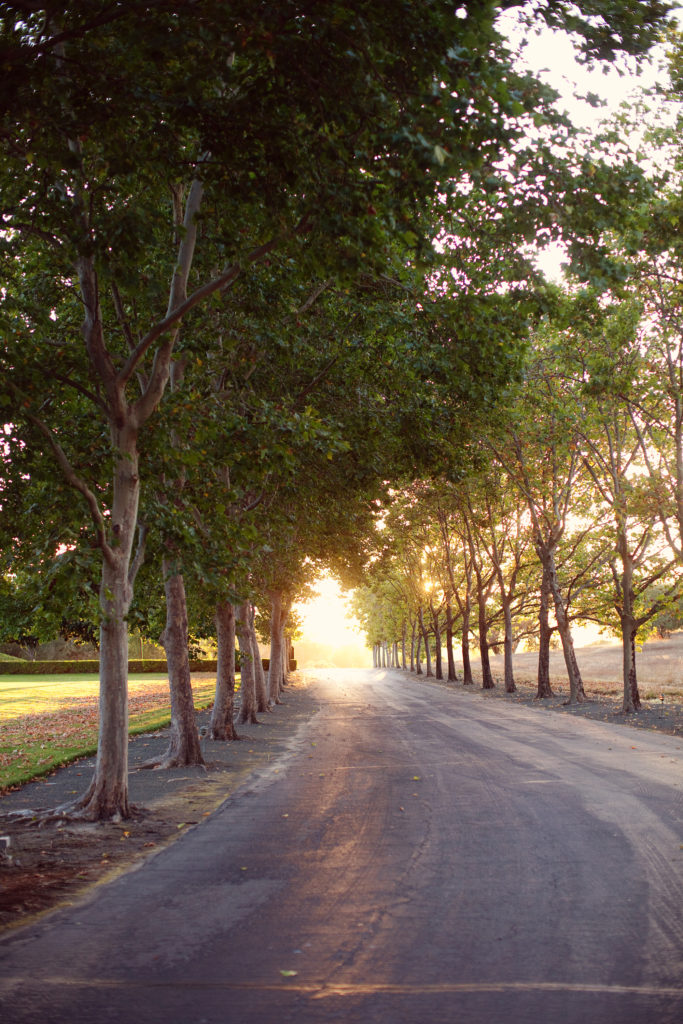 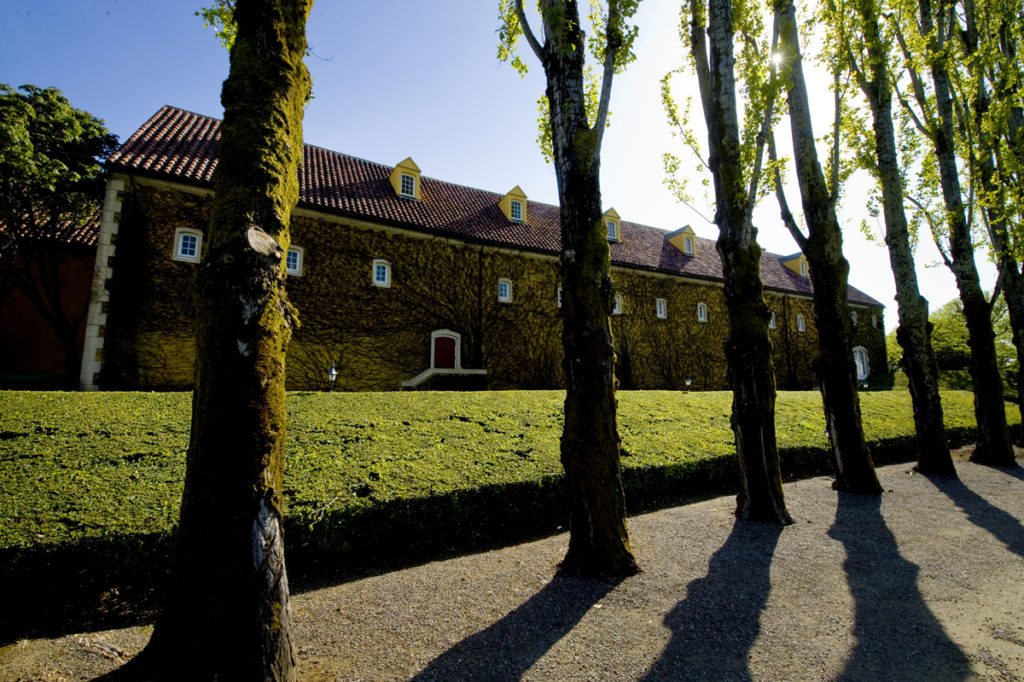 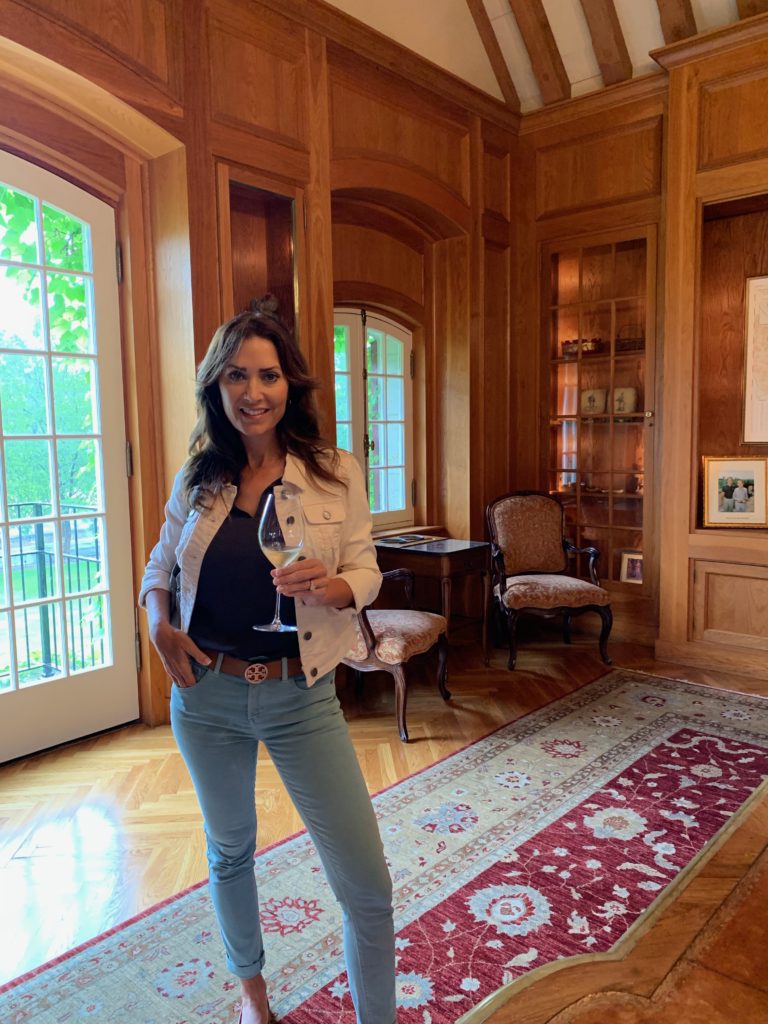 Karen LeBlanc, aka The Design Tourist, tasting Cuvee in the library of the chateau during a tour of Jordan Vineyard and Winery

After tasting an NV Brut Jordan Cuvee by Champagne AR Lenoble in the chateau library, I tour the barrel room. One the day I visited, Jordan’s winemaker Rob Davis was preparing to master blend its 2018 vintage into French oak barrels. (The Cabernet will release in spring 2022 and the chardonnay in spring 2020.) 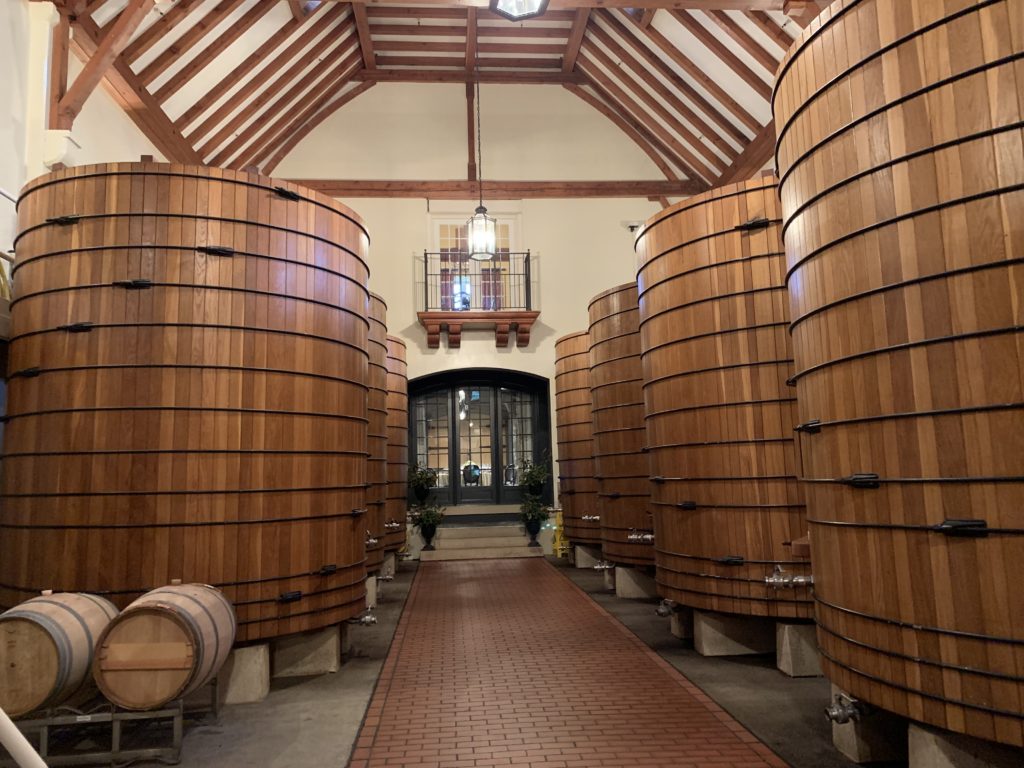 The selection process for master blending starts in November and December when the winemaker does blind barrel tastings to decide which grapes will make it into the master blend. Jordan recently changed its oak barrel program switching to entirely French oak barrels and released the first wine aged exclusively in French oak barrels, the new 2015 Jordan Cabernet Sauvignon. 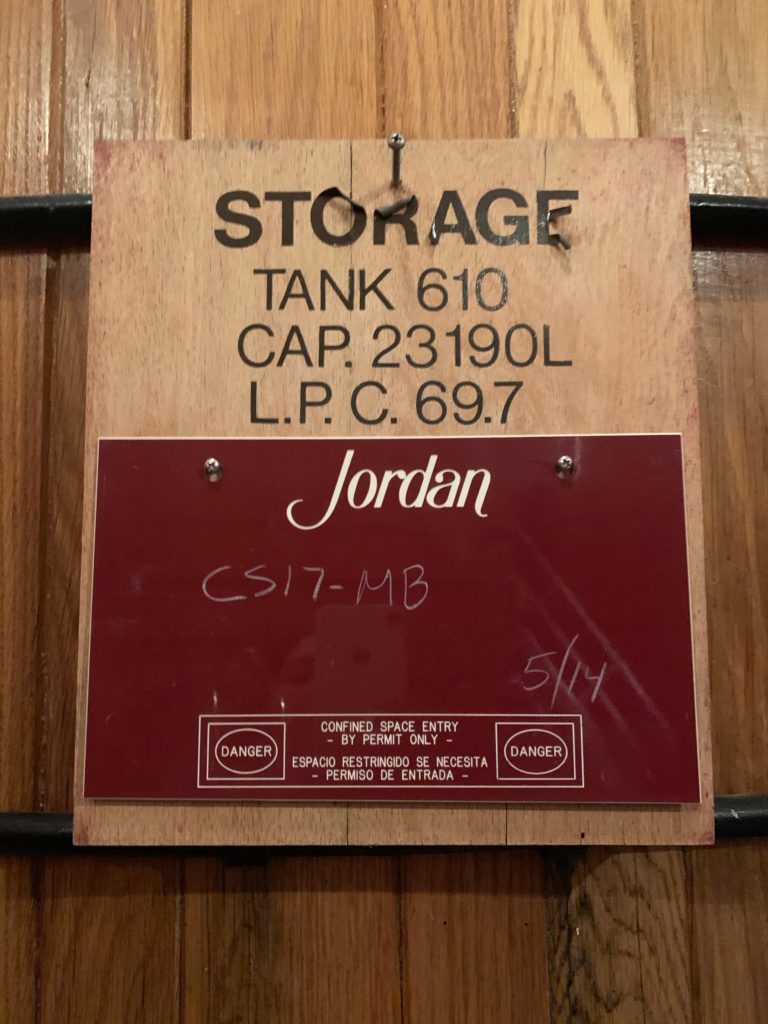 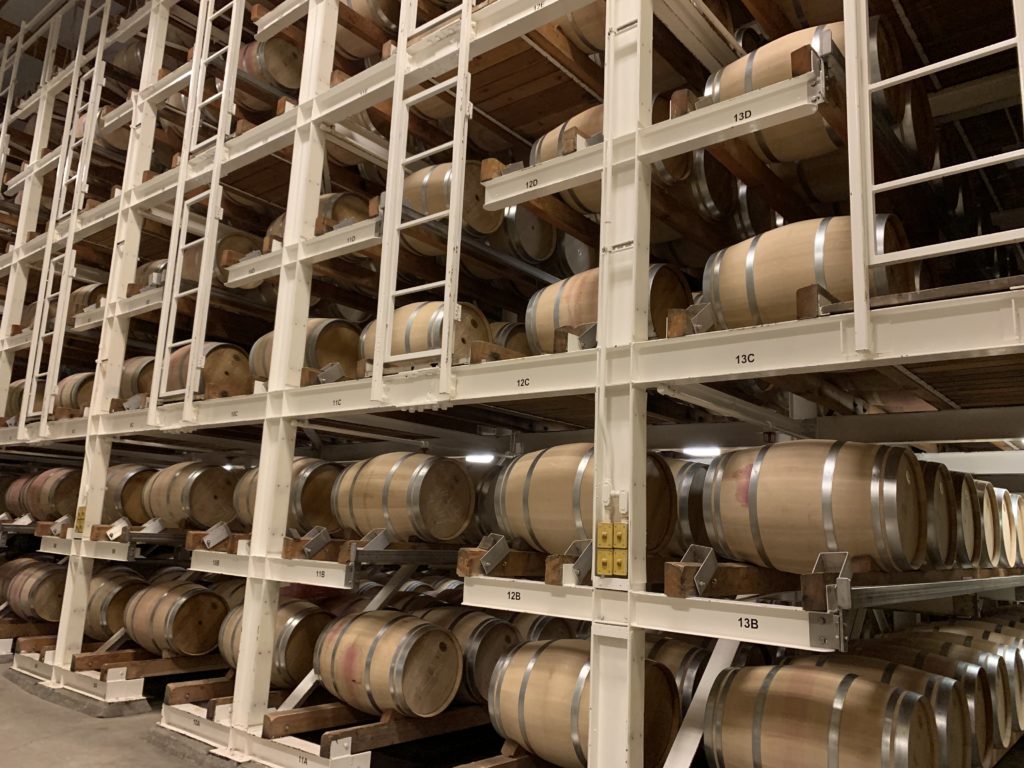 American oak is known for bringing more aggressive aromas of dill and coconut to red wines. French oak is considered more subtle, imparting spice aromas and a silky texture in part because its tannins have a strong attraction to the grape tannins. 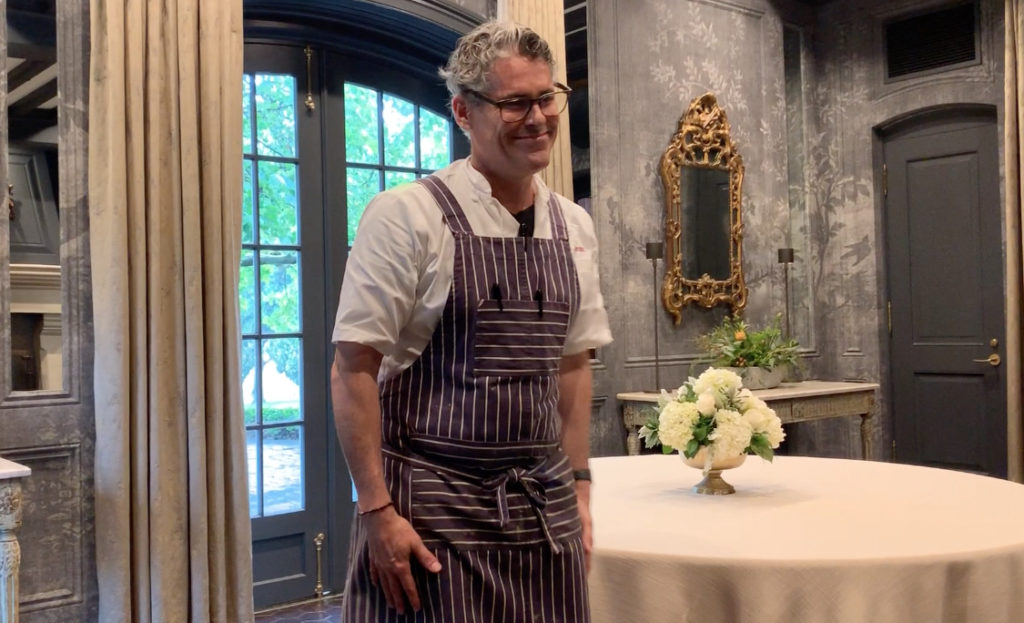 Next, I meet Executive Chef Todd Knoll who uses farm-raised, garden-grown and foraged ingredients to create dishes that reflect the property’s unique terroir.  Chef Knoll has prepared a media lunch to showcase his talents and Jordan’s wines. 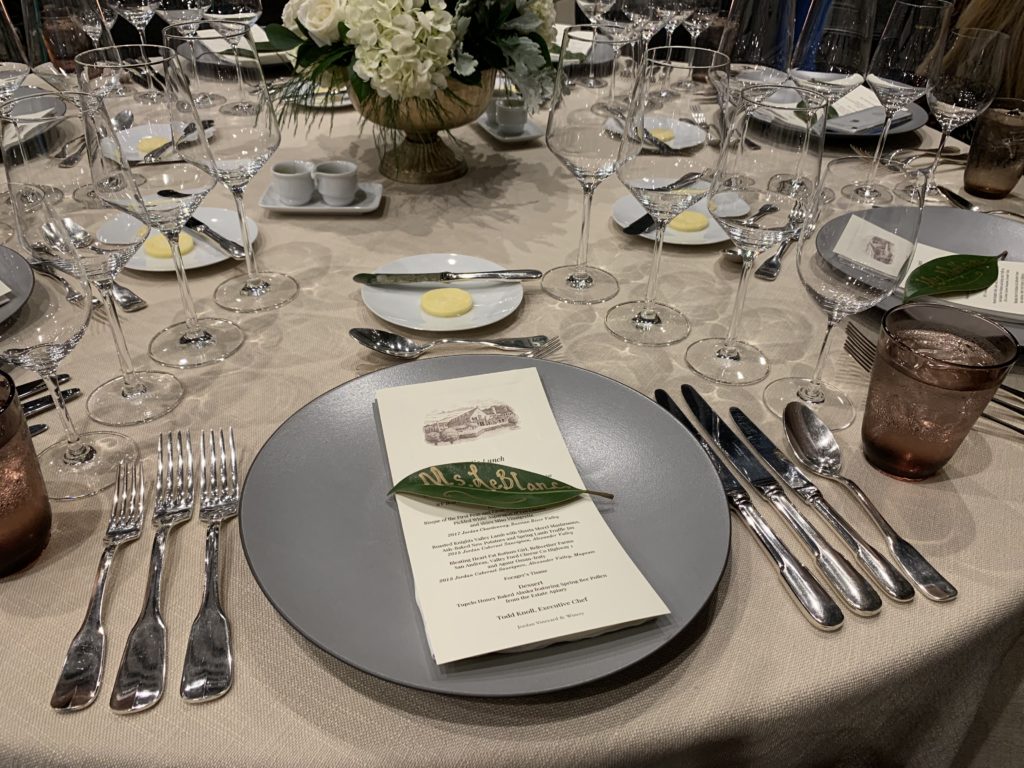 I lunch in the reimagined dining room which debuted in 2019 designed by Geoffrey De Sousa of San Francisco, a top interior design firm on the West Coast. Chef Knoll wanted the decor to echo the estate’s habitats that inspire his cooking. “We wanted a more natural backdrop for the kind of cooking that we do and the flower arrangements we display in this room. The darker color palette reminds me of foraging through the forest. It has a nice, romantic feeling. It was important to us to keep the bones of the original building and its antiques,” says Knoll. 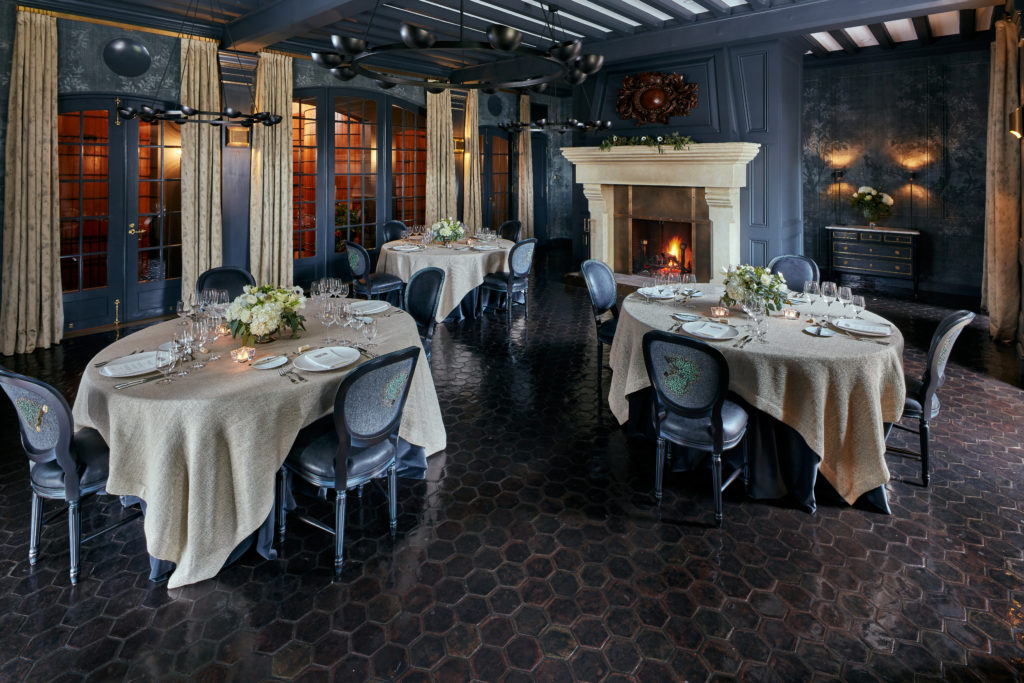 The original dining room was decorated in an 18th-century French style. De Sousa and his staff reimagined the aesthetic, retaining its best architectural features while introducing new design elements to reflect the chef’s culinary philosophy of bringing flavors of the surrounding countryside to the plate. “The Jordan dining room is now not only an homage to old-world France, it’s also a portrait of the surrounding estate and the chef’s philosophy,” notes Geoffrey De Sousa, proprietor of Geoffrey De Sousa Interior Design and De Sousa Hughes. 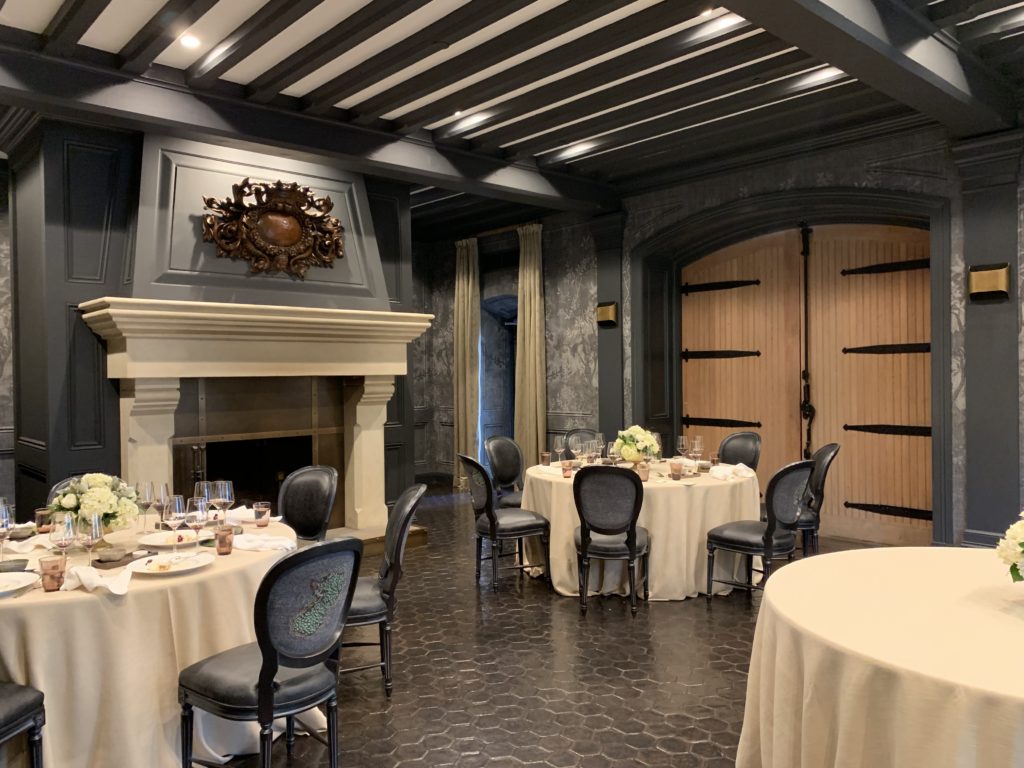 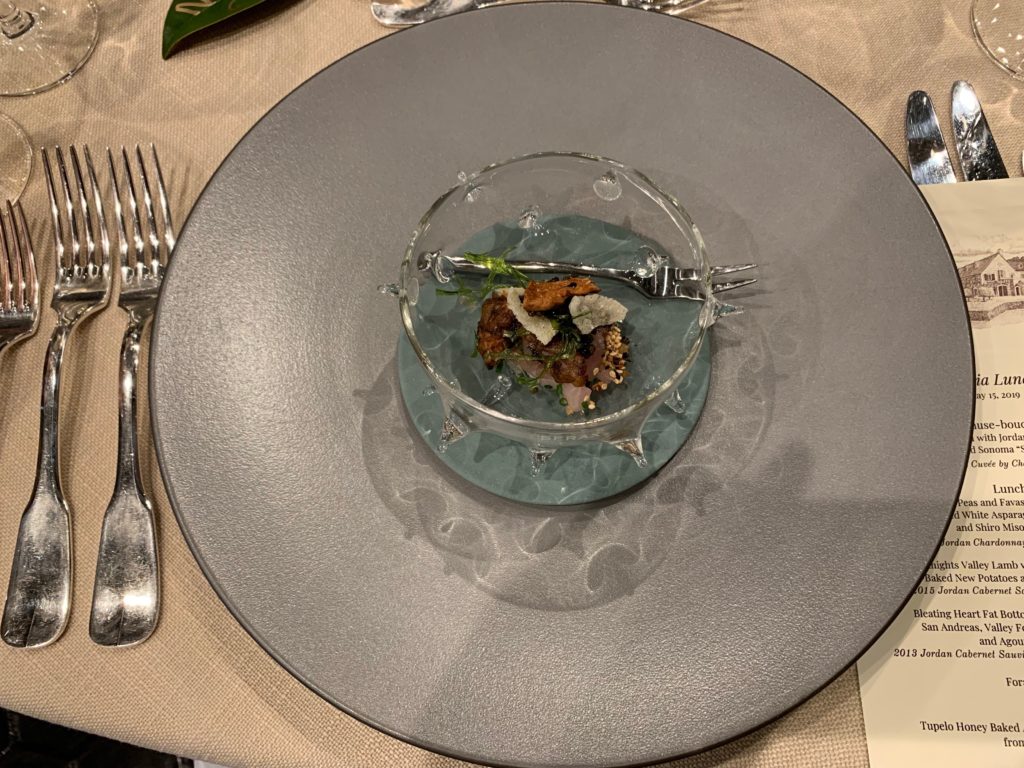 Next, I taste a 2017 Jordan Russian River Valley Chardonnay. The grapes are hand-picked at night when the fruit is cold to lock in that acidity and flavor. The fruit is then pressed immediately and fermented in French oak barrels and stainless-steel tanks for 6 months. 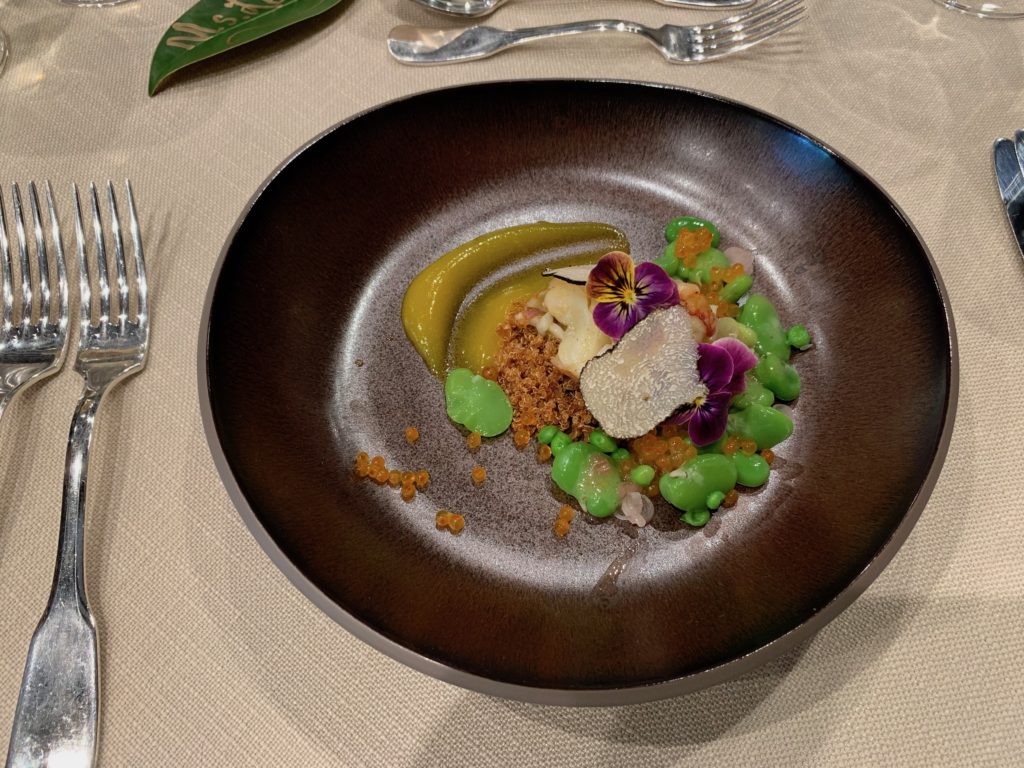 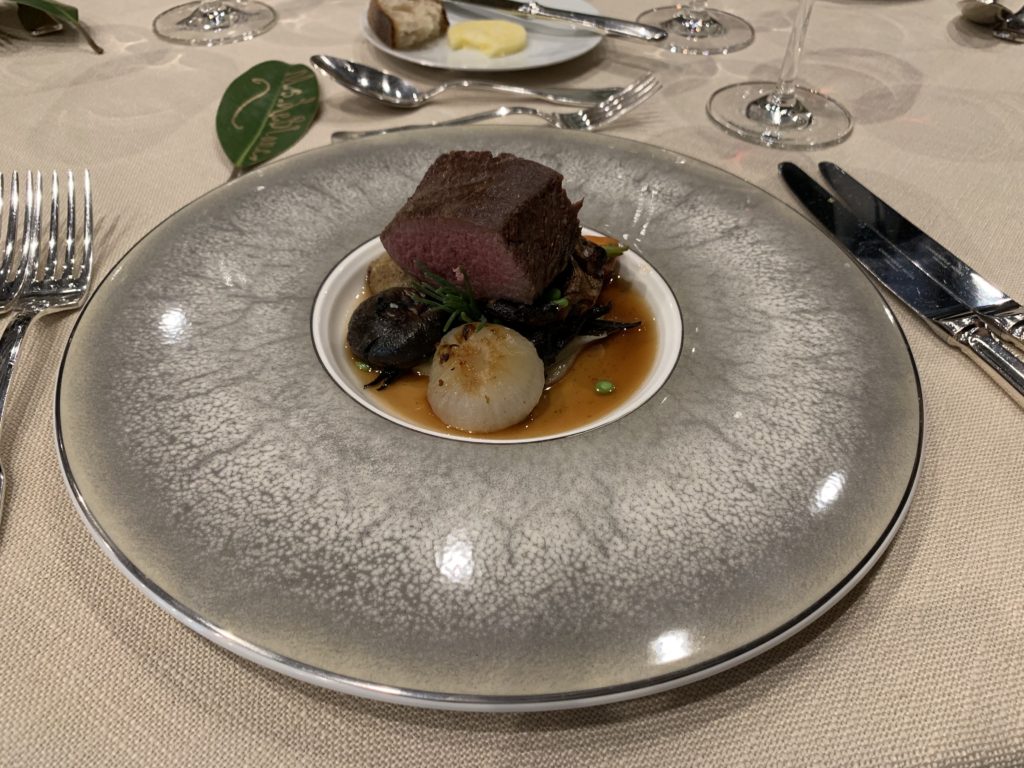 The dish is paired with Jordan’s 2015 Cab, that first release aging in only French oak barrels.  “2015 was a cooler year yielding more of a French style of wine,” says Mattson. 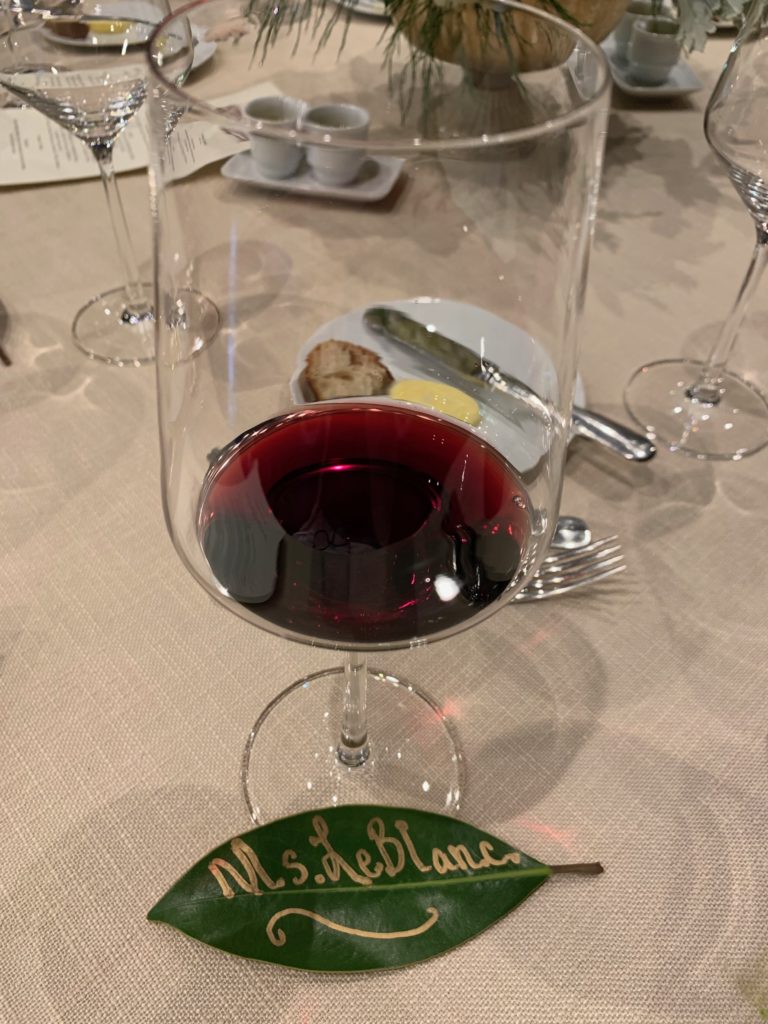 Chef Knoll makes sea salts and the estate grows olive trees to produce Jordan Estate Extra Virgin Olive Oil, both of which are on the table to enhance the tasting experience. 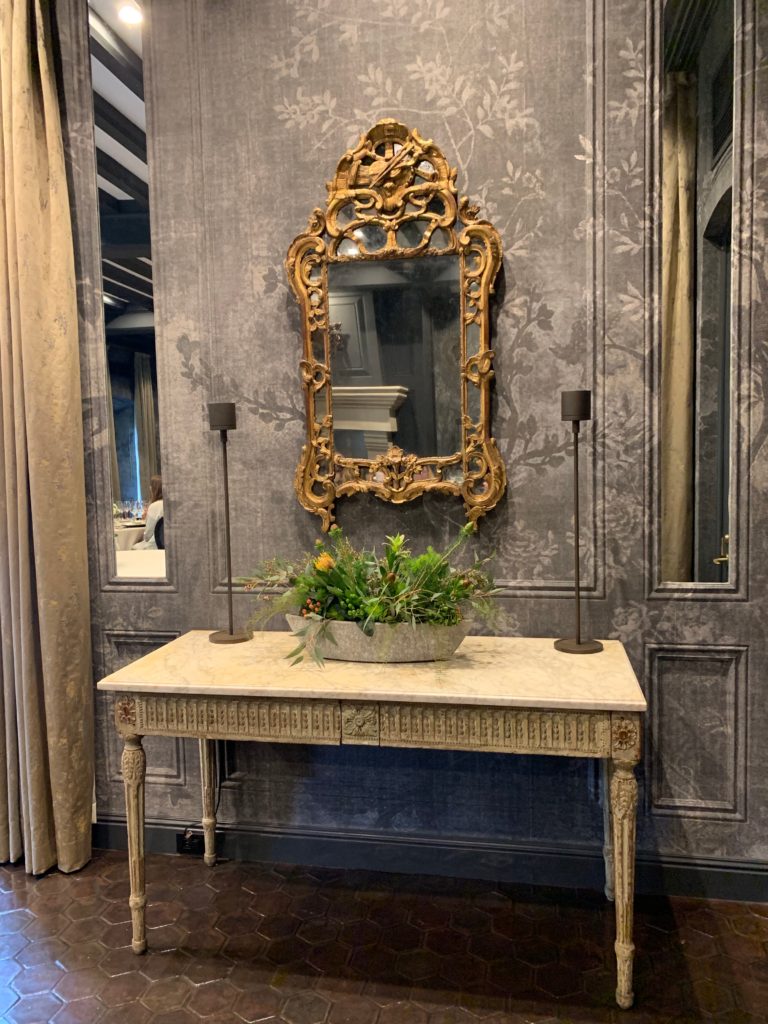 While dining, I can’t help but admire the visual metaphors that connect with the estate’s topography.  Deep gray walls are painted with Benjamin Moore French Beret and accented with a forest-like patterned wallpaper called Midsummer Night from Wall & Deco, created by graphic designer Lorenzo De Grandis of Milan, Italy. 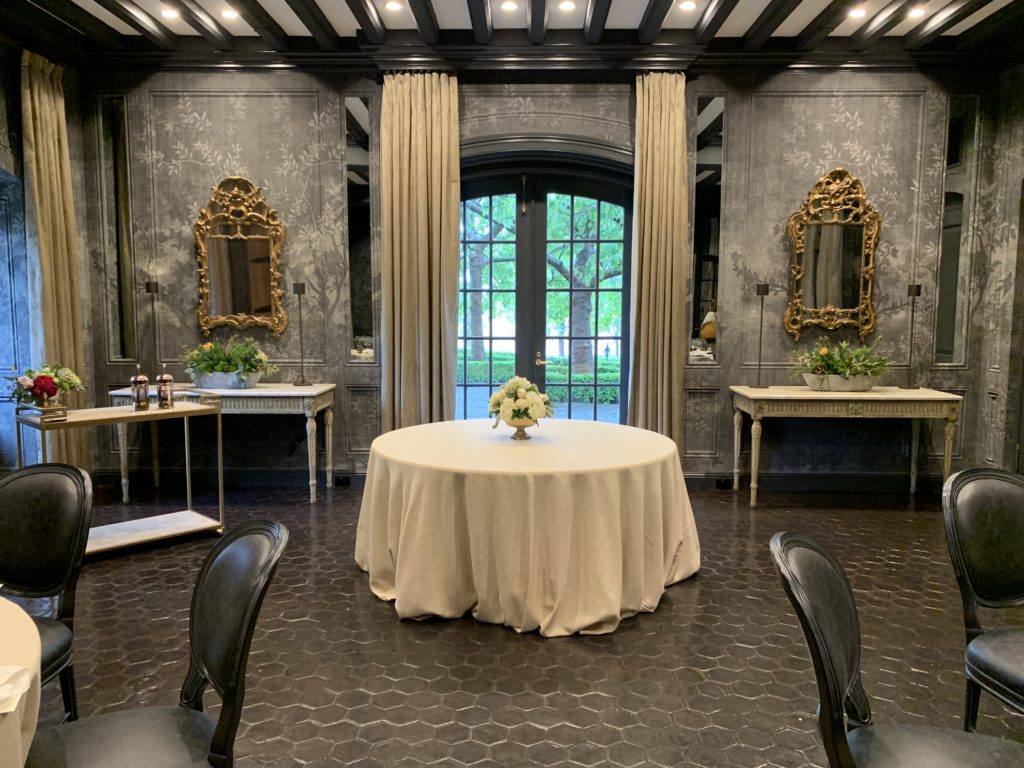 The dining room’s original high-back chairs were restored and reupholstered with intricate chair embroidery by a renowned, haute-couture artist based in London. Each embroidery pattern is distinct and inspired by the vibrant, moss-carpeted rocks and lichen found across Jordan Estate. 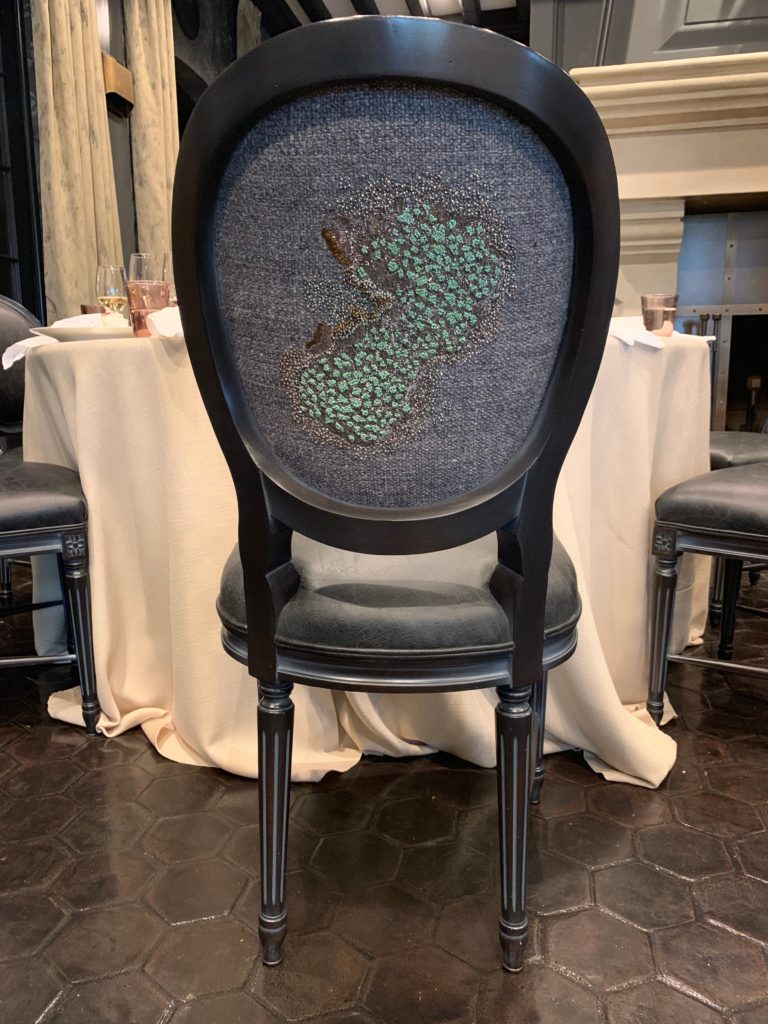 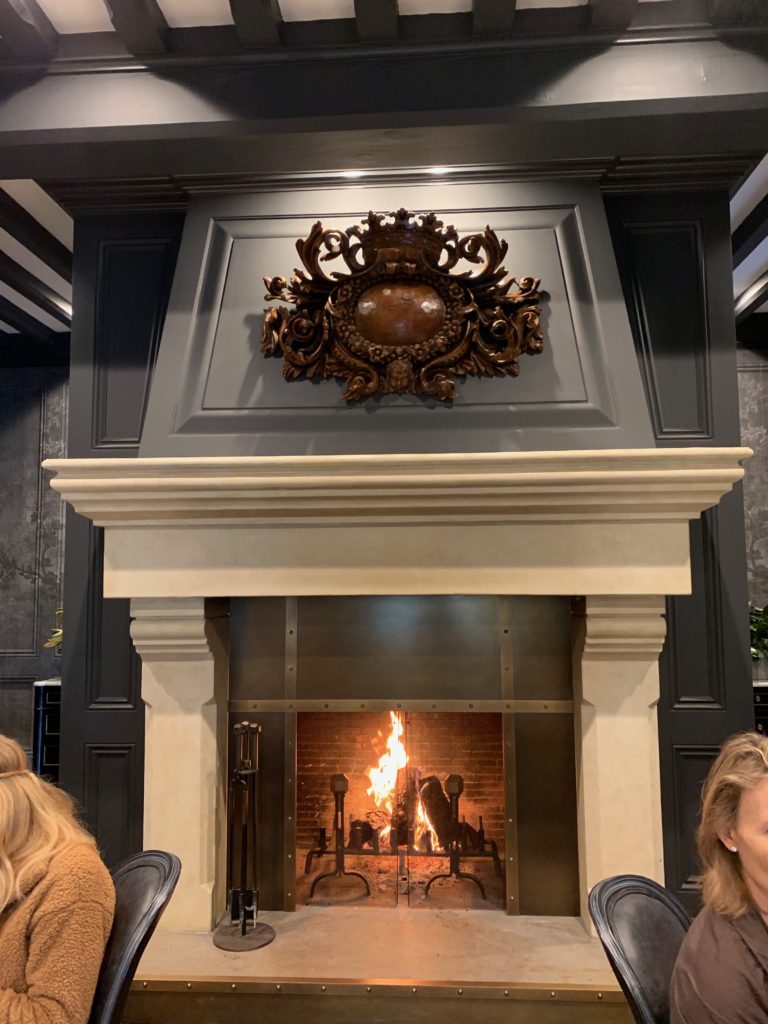 The “Piethian Apollo,” a playful statue by New York artist Stephen Antonson from his pie-faced bust series, which aligns with Jordan’s reputation for its fun culture and humorous music videos.

The walls display photographs taken by Chef Knoll of the estate. A new butler’s pantry features French doors that open to a covered alcove, giving guests the opportunity to see Jordan’s culinary staff in action during outdoor events, such as Picnic Days at Jordan, Bastille Day Brunch and Bounty of Sonoma County Dinner. 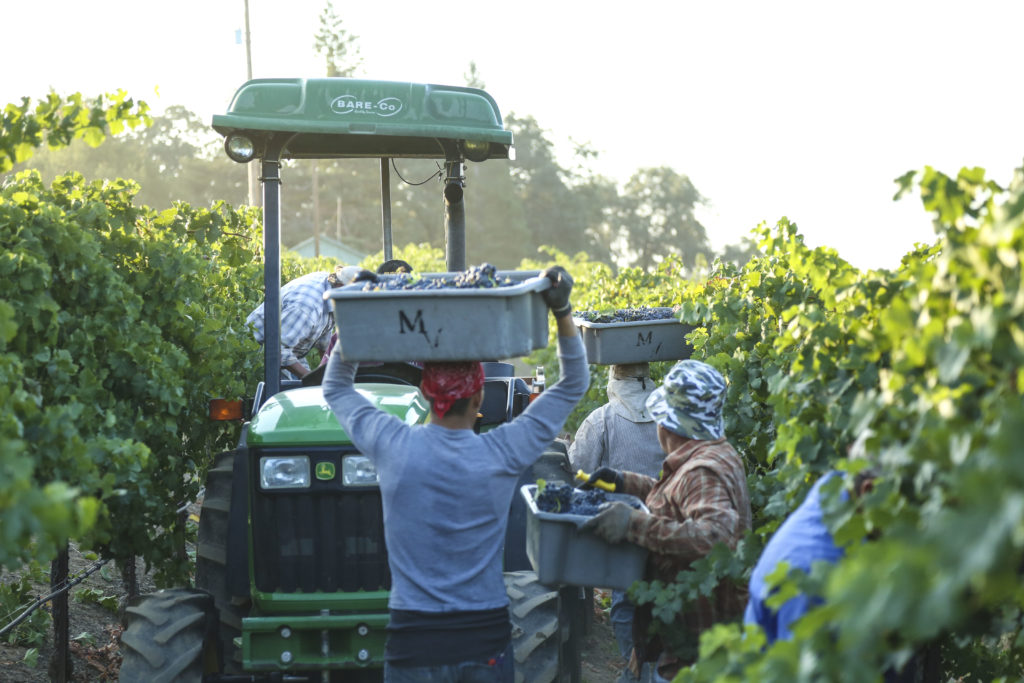 I also learn more about Jordan’s sustainable and holistic practices. The vineyard uses a plant substance called Dust Off on its roads to reduce dust and a clay-based sunscreen on the grapes to prevent sunburn. 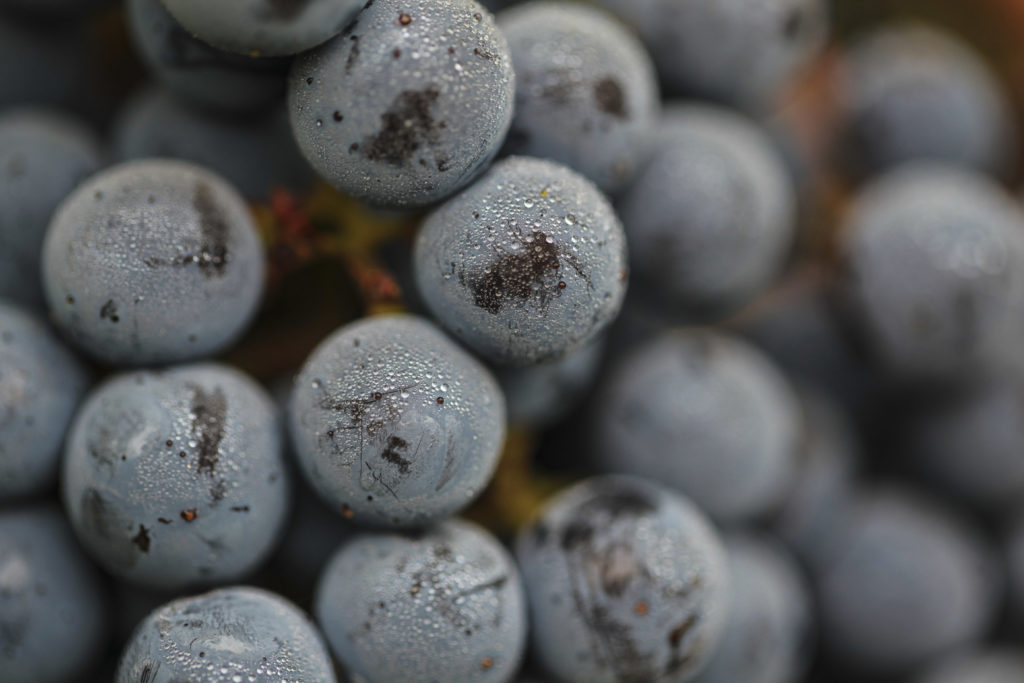 “We take into account the impact every viticultural and winemaking decision has on the native ecosystems under our care. Jordan’s electrical use is carbon neutral, with roughly 90 percent of our electricity coming from hillside solar arrays behind the winery and the rest from renewable resources through the Sonoma Clean Power program,” says Mattson. 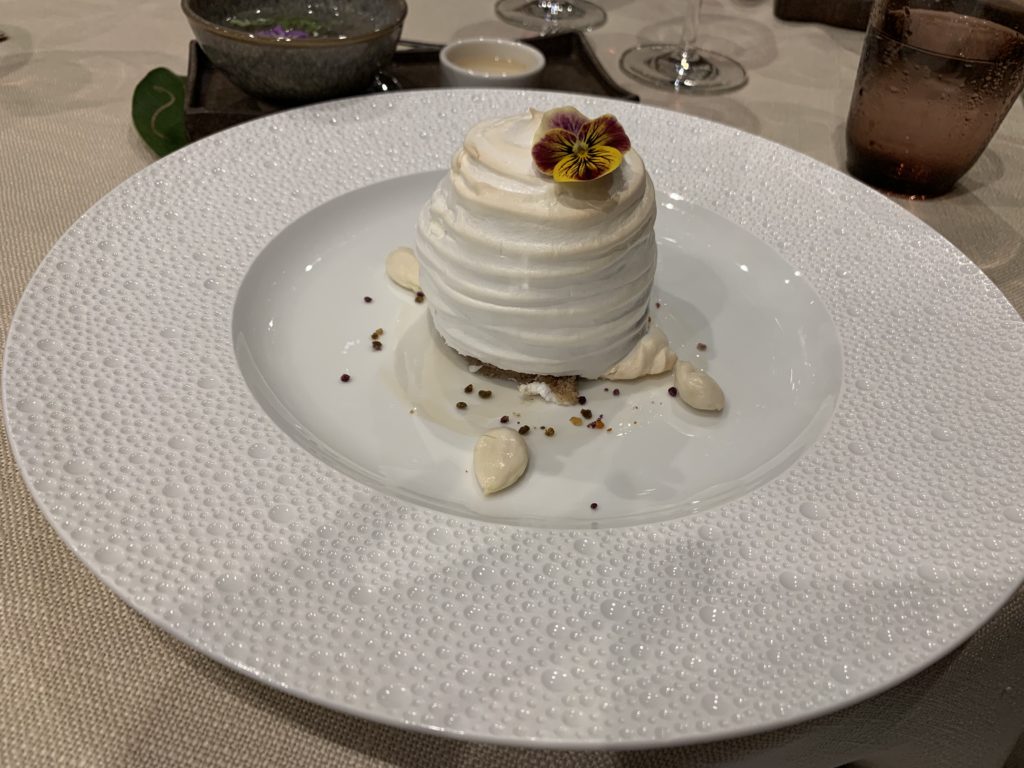 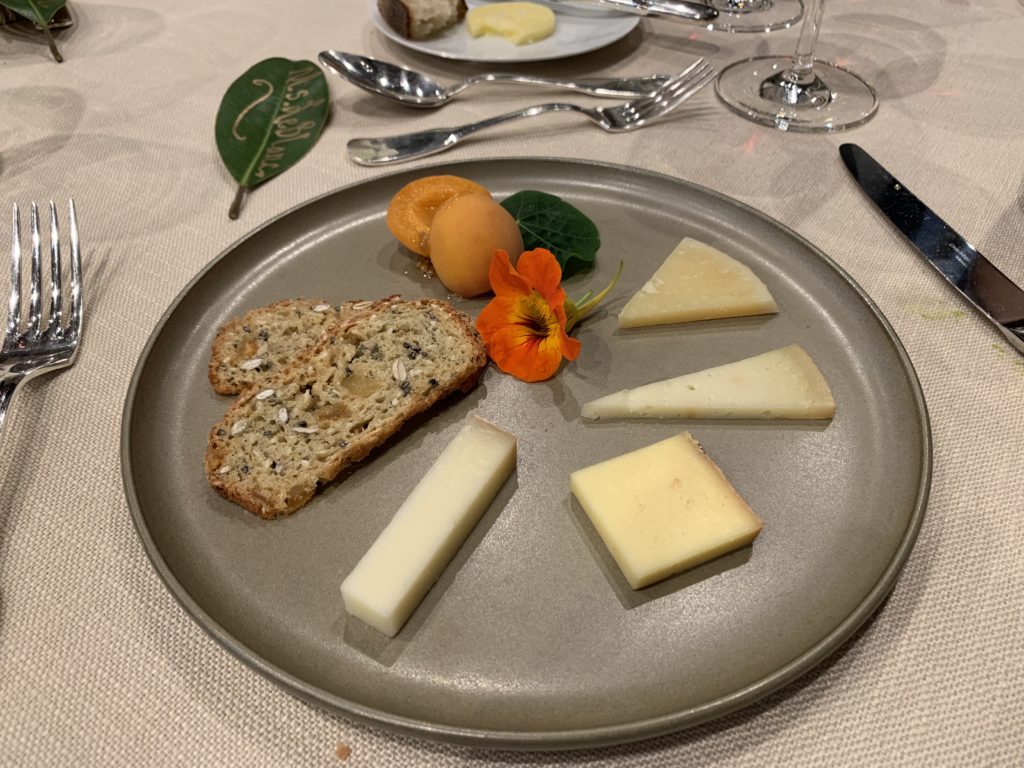 The meal crystalizes a certain synergy that exists in Sonoma County between its many different artists and winemakers who share a common passion for high-quality food made to complement local wines. Jordan, like many local wineries, promotes locally made foods and products with guests. 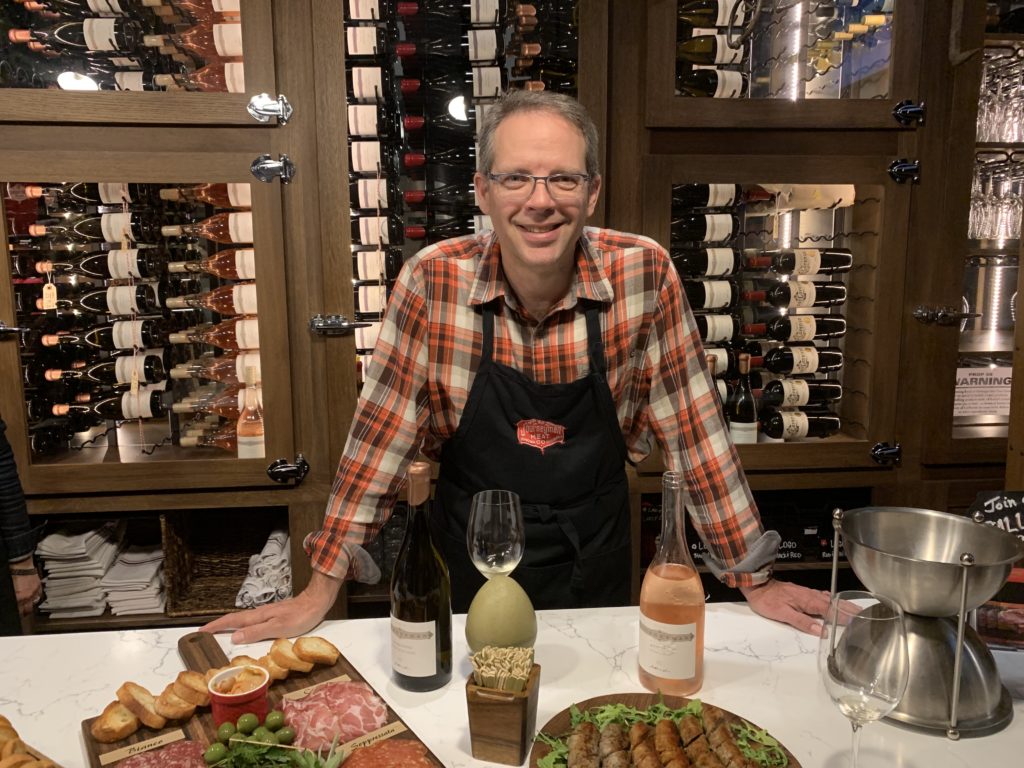 Jordan partners with local artisans to bring new elements to the dining experience including a Healdsburg salumeria, Journeyman Meat Co.,  that created a custom-cured meat to pair with Jordan wines. 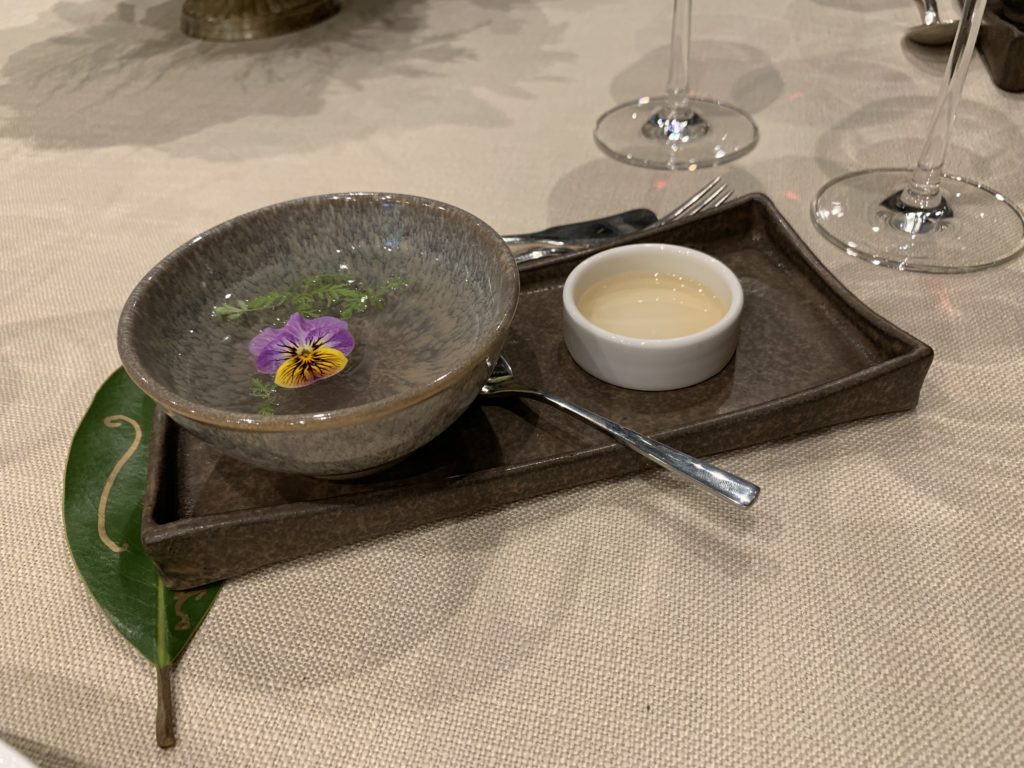 Guests at Jordan’s Estate Tour and Tastings can appreciate custom-made serving plates by a ceramic-making husband-wife team, Nikki and Will Callnan of NBC Pottery, who harvested clay from Jordan’s garden. 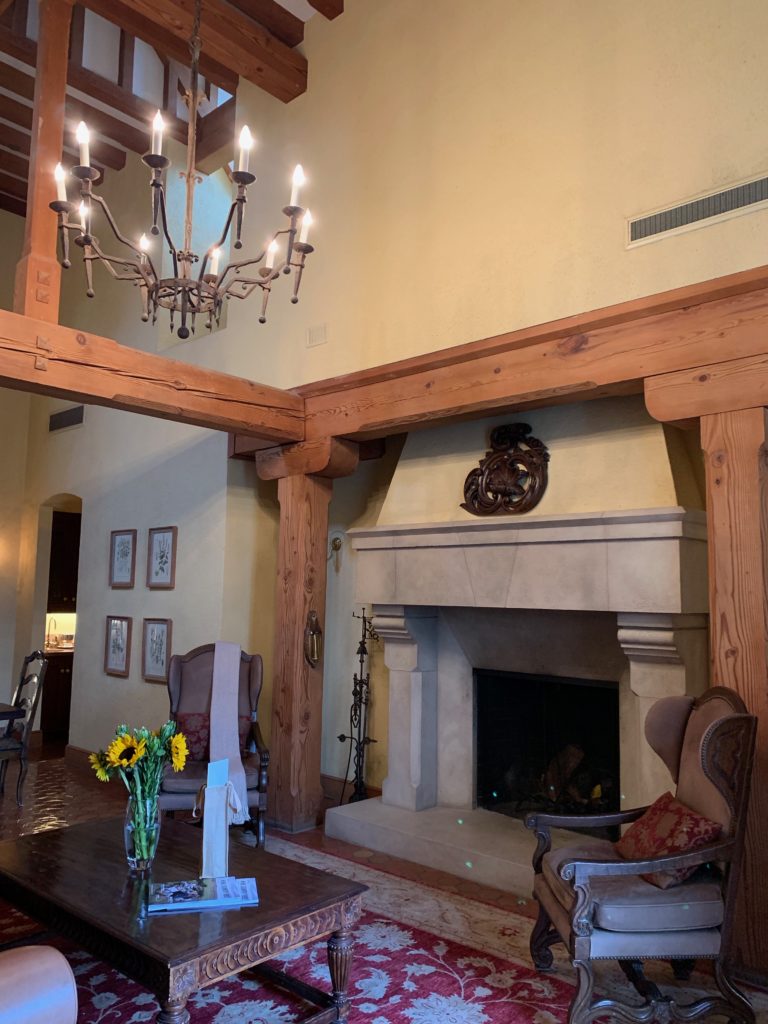 My tour ends with a visit to one of the guest suites located in the chateau available to members of Jordan’s loyalty program, Jordan Estate Rewards. 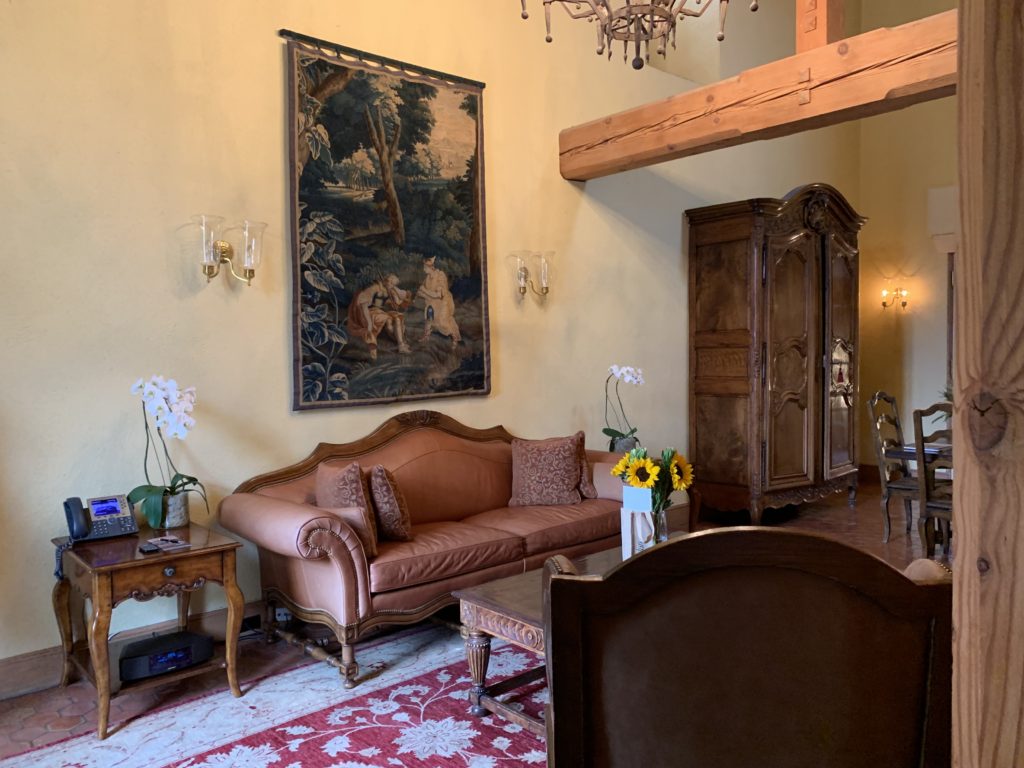 Once a consumer spends $500 with Jordan, she/he becomes a Silver member and gains access to booking Private Tables in the dining room and at the Gold and Platinum levels, overnight stays in the guest suites. For more on booking tastings and tours, go to https://www.jordanwinery.com/

How to choose a garage door repair company?

Silver Oak Winery and Vineyards Preserves the Earth and the Arts

How Indoor/Outdoor Sports Facilities are Making Waves in...

House Remodeling Design Tips for Each Room in...

Fun Alternatives to the All-White Kitchen

What Skills Can You Acquire with Aesthetics Courses...

5 mistakes you shouldn’t make when you declutter...

5 Affordable Renovations That Can Increase The Value...